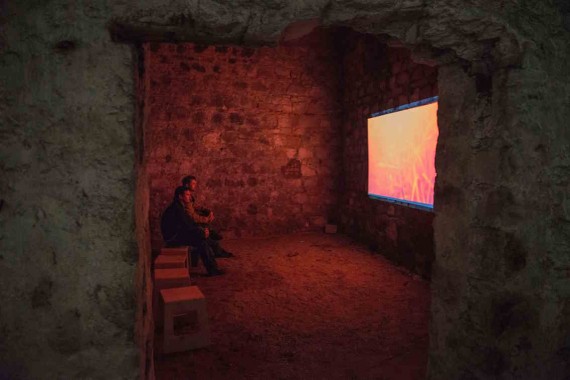 A sense of place and a certain on-the-edge-of-things strangeness comes with the territory in Berwick-upon-Tweed. It is, of course, a border town – just two and a half miles from Scotland – and has had to defend itself and its identity over many centuries. These days, though, Berwick’s biggest challenge is putting itself on the map, making sure it is not forgotten – and the 11th Berwick Film and Media Arts Festival is one part of this.

Themed around the loose idea of ‘fact and fiction’, the first festival programmed and curated by new director Peter Taylor made good use of the town’s former defences and 18th century infrastructure. With an increased focus on artists’ films, installations were secreted away in – among other places – disused ice houses, former prison cells and a gunpowder store with rather new-looking barrels.

American artist Peter Burr used the Bankhill Ice House to immerse the viewer in a Tron-style, computer animated environment. Standing on a low, square stage surrounded on four sides by large screens, Cave Exits (2015) – pictured below – took the viewer through the clicks and coding of a video game programmer and into a world of a self-generating virtual dungeon.

A short walk away, Kathleen Herbert’s A History of the Receding Horizon (2015) – pictured top – was screening in another former ice store underneath the town’s Custom House. This thoughtful and thought provoking single-screen video was set within the landscape of Kielder, Northumberland and looked both upwards to the stars and down into (and under) the waters of the Kielder reservoir. Time passing, memories lost and our relationship with place – all gracefully unfolded in this gently engaging film.

In the Custom House itself, things were rather more frantic. Liverpool artist Paul Rooney, the festival’s 2015 artist in residence, presented two pieces. Screening on a small monitor in the corner of an unloved front room, Lost High Street (2008) was a fast moving, paranoid tale of an endless open-top tourist bus tour, circling the city of Edinburgh as Rooney’s increasingly delusional narrative mixed real Cold War-era events with Orwellian paranoia. And a bit of punk rock.

In another room, Rooney’s festival commission, Still At Large (2015) saw a Robert Hughes-style TV presenter roaming the Lindisfarne landscape as the artist messed with and deconstructed both form and content. As history was confused and simplistic narratives discredited, black and white stills from Roman Polanski’s Lindisfarne-set film Cul-de-Sac (1966) invaded the windswept landscape of the Northumberland coast. What began like a piece of standard issue TV documentary dissolved into darkly absurd confusion.

The films of Belfast-based artist Seamus Harahan are not averse to a spot of absurdity, either. Usually accompanied by music – from Irish folk to grungy blues and occasional classical – a selection of his quietly observational work, or ‘benign voyeurism’ as he puts it, received a special screening and Q&A at the festival. The hour and a half event included work from 1998-2014 and complemented Harahan’s commissioned installation, The Fucking Finland Series (2015), at the Town Hall’s prison cells (pictured below) and Coxon’s Tower.

Harahan’s simple, hand-held footage of not much and quite a lot has a certain dirty beauty and humane inquisitiveness. Shot at a ferry terminal in Finland as well as on the boat to Estonia, Fucking Finland’s slowly evolving narrative played out across three screens, one after the other, in the Town Hall. Time and patience were required.

For the internationally renowned Lithuanian artist Deimantas Narkevicius, time’s effect on memory is a key theme. Showing at Berwick Gymnasium, five works on small monitors (pictured below) addressed – and mischievoulsy reinterpreted – the lives and ideology of the Soviet era.

Once in the XX Century (2004) takes TV news footage of the dismantling of the statue of Lenin in Vilnius and edits it to look as if the crowds are cheering as it is erected; Augetraumt (Dream Over) (2010) shows a young Lithuanian band rehearsing a new song in the depths of the harsh winter; Energy Lithuania (2000) is a study of an electric power plant.

On a large screen at the back of the gallery, Revisiting Solaris (2007) – based on the last, unfilmed chapter of Stanislaw Lem’s philosophical sci-fi novel, Solaris – provided a mysterious and moving take on the ethics of space-age science.

Fact, fiction, half-truths and hopes – there was much to believe and much to question at this festival. And much to suggest that a town like Berwick, with its independent, edge of England mindset, is a good place for a festival that eschews the easy route when the awkward one looks so much more interesting.