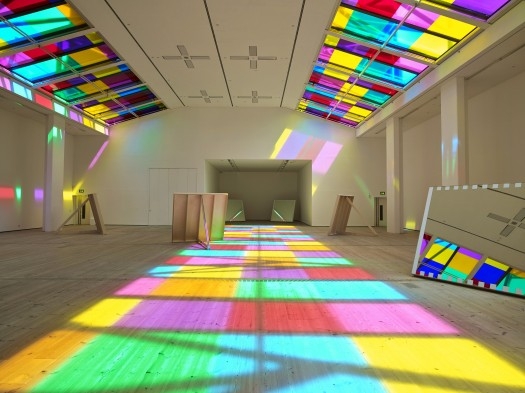 Daniel Buren: Catch as catch can: work in situ, Baltic Centre for Contemporary Art, Gateshead
Buren’s beautiful installation (pictured above) used a series of large, tilted mirrors to reflect and refract bars of coloured light around the gallery from the windows above, creating an optically immersive conversation between viewer, architecture and the world beyond. Now in his seventies, Buren continues to develop his conceptually complex – yet often visually simple – ideas to great effect.
www.balticmill.com

Tom Dale: Department of the Interior, Cøpperfield, London
Dale’s show took its title from the black bouncy castle that filled much of Cøpperfield’s vaulted, former church hall space. Intended as a critique of governance and power, the gothic yet Disney-esque castle also hinted at the kinds of adult power games our parliamentary representatives may enjoy after hours. Dale’s show at John Hansard Gallery, Southamption – Terminal Blue – continues to 7 February 2015.
www.copperfieldgallery.com

Paul Cummins and Tom Piper: Blood Swept Lands and Seas of Red, Tower of London, London
Consisting of 888,246 ceramic poppies – one for each of the British fallen from the first world war – this was public art that really captured the ‘public’s’ imagination and support. The evolving installation was both deeply humbling and undeniably sad, yet also a reminder of the strength of human courage and spirit in times of great adversity.
poppies.hrp.org.uk

Dan Holdsworth: Mirrors, Pippy Houldsworth Gallery, London
The title refers to Holdsworth’s technique of dividing his photographic images along the diagonal axis to offer up two orientations of the same view, one an inverse reflection of the other. Photographed from above, the barren, glacial terrains took on a strangely alien appearance, where peaks read as valleys, and convex surfaces looked concave, a duality that served to highlight how unreliable human perception can be, but also to remind us of the sublime power of nature.
www.houldsworth.co.uk

Towards a New Socio-Painting, Transition Gallery, London
East London Painting Prize winner Nathan Eastwood curated this show that looked to reappraise the conceptual and aesthetic ideas of the Social Realism movement. Paintings by Nicholas Middleton, Narbi Price, David Sullivan and Eastwood himself – complemented by a Socialist Reading Room selected by artist and writer Alex Michon – made for an enjoyable, thought provoking show that raised questions about what constitutes ‘socially engaged art’ today, and about broader political and cultural issues.
www.transitiongallery.co.uk

Rachel Maclean: Happy & Glorious, CCA, Glasgow
Placing herself centre stage as the only actor in her multi-character narratives, Scottish artist Rachel Maclean unearthed historic and contemporary ideas of British national identity in three inventive and darkly witty films. Most captivating was the two-screen installation, Please Sir… (pictured above), which saw an Adidas-wearing Oliver Twist criss-crossing time, class and cultural divides while unpicking what binds us together and keeps us apart.
cca-glasgow.com

Phylidda Barlow: GIG, Hauser & Wirth Somerset, Bruton
A fantastic show to launch this impressive new art centre on a former farm. For GIG, Barlow created a large body of new work that managed to capture both the joy of reinvention the space embodies and the loss of a rural way of life. From brightly-coloured fabric pom-poms to rickety sculptural forms reminiscent of old farm machinery, the works occupied and animated the gallery spaces to create a compellingly robust exhibition.
www.hauserwirthsomerset.com

Michael Fullerton: Meaning Inc, Glasgow Print Studio, Glasgow
Incorporating print, portraiture and sculpture, for Meaning Inc Glasgow painter Michael Fullerton dissected the information age from the birth of Hollywood to illegal file sharing. Packed with historical anecdotes and including a recent portrait of Kim Dotcom – the millionaire internet entrepreneur currently under house arrest in New Zealand – this timely exhibition asked the viewer to think about how meaning is created, both in art and the wider world.
www.gpsart.co.uk

Malevich: Revolutionary of Russian Art, Tate Modern, London
Viewing this exhibition was akin to reading an epic Russian novel, such were its calamitous plot twists and emotional highs and lows. Tsarist Russia, the first world war, the Bolshevik revolution, Stalinist tyranny – all play their part in the story of Malevich’s art, from early landscapes to suprematism to his return to portraiture in later life. It was the relationship between the brilliant mind of this groundbreaking artist and the world-changing events going on around him that made this show so enthralling.
www.tate.org.uk

Jordan Wolfson, Glasgow International 2014, McLellan Galleries, Glasgow
Occupying the wood-panelled meeting rooms in the underbelly of the rarely used McLellan Galleries, this Glasgow International show brought together a rich collection of the New York artist’s films. Computer-generated HIV viruses, a cartoon ‘angry kid’ with a penchant for self harm, an animated, yarmulke-wearing Jewish man flicking through Vogue magazine – Wolfson’s unsettling and at times sinister work was a blackly comic ride and a highlight of director Sarah McCrory’s debut GI.
glasgowinternational.org

Folkestone Triennial
There was so much to enjoy in this event that dissolved some of the boundaries between art, science, architecture and urban intervention. From Emma Hart’s haunting sculpture, to Alex Hartley’s Vigil, and the enormous bamboo deck by Gabriel Lester (pictured above) that framed different views of the sea and town, it continually provoked, stimulated and inspired.
www.folkestonetriennial.org.uk

Whitstable Biennale
I loved this event as well. Despite the weighty ‘biennale’ tag, Whitstable remains a perfectly sized unique platform for the work of emerging artists doing thoughtful and unusual work. Works by Louise Fairclough and Rosa Ainley stood out.
www.whitstablebiennale.com

Magnum Photos: One Archive, Three Views, De La Warr Pavilion, Bexhill-on-Sea
A rare opportunity to see images from the Magnum archive, selected by artist Uriel Orlow, photographer Hannah Starkey and anthropologist Elizabeth Edwards. Mostly narrative photographs, each one is powerful and complete in itself. Leaves you wanting to see more from the archive.
Until 4 January 2015, www.dlwp.com

Jake and Dinos Chapman: In the Realm of the Unmentionable, Jerwood Gallery, Hastings
Beneath the laddish humour and sometimes puerile gestures, the Chapman brothers explore the darkest areas of the human psyche, almost always an unsettling but powerful experience. This show at the Jerwood Gallery in Hastings is no exception, with their dystopian tableaux of evil fighting evil and crucified Ronald McDonald figures. Some rewarding drawings on display too, particularly those from Jake made at art school.
Until 7 January 2015, www.jerwoodgallery.org

Charlotte Prodger, Glasgow International 2014, McLellan Galleries, Glasgow
An assembly of sound, video and text works in a well-executed installation (pictured above), the Glasgow-based artist made good use of the cavernous space that is the McLellan Galleries. I first saw Prodger’s work during her MFA degree show at CCA, Glasgow in 2010, and this year I was genuinely excited to see her make the the most of this GI commission, presenting ambitious and tightly considered work.
www.kendallkoppe.com

Germany divided: Baselitz and his generation, From the Duerckheim Collection, The British Museum Prints and Drawings Gallery, London
The work of Georg Baselitz should be on the radar of any artist working with the figure in a drawing practice. To witness a curated selection of his prints and drawings in a suitably framed setting, alongside the work of his contemporaries, was revealing and informative.
www.britishmuseum.org

Nina Canell: Near Here, Camden Arts Centre, London
Dissected and submerged industrial electricity cables; delicately placed chewing-gum wrappers; and daylight as if a gift from the artist herself to complement the placing of everyday objects. For her exhibition, Near Here, Nina Canell presented a body of work in response to the architectural environment of Camden Arts Centre that amounted to a show that was nothing less than spellbinding.
www.camdenartscentre.org

Lewis den Hertog, Protein Shake, Embassy Gallery, Edinburgh
This selection of video works and prints were produced during an online residency with #ooooFF Gallery, in exchange with Embassy. With his meticulous editing of borrowed webcam footage of girls in their underwear, den Hertog lip-synced to found monologues (also sourced on the internet) to give voice to soft toys in the background: teddy bear went all philosophical and it was surprisingly, if not absurdly, effective.
www.embassygallery.org

Christopher Orr: The Beguiled Eye, Talbot Rice Gallery, The University of Edinburgh
You could spend a good few hours trying to pick apart how on earth Christopher Orr put these paintings together, until you realise that enjoying the work is probably enough. And enjoy it you will – the small-scale detailed works are presented brilliantly in Talbot Rice’s accommodating white-cube gallery, for what is Orr’s first solo show in Scotland.
Until 14 February 2015, www.ed.ac.uk/about/museums-galleries/talbot-rice

Sharon Lockhart, Liverpool Biennial 2014, FACT, Liverpool
The Los Angeles-based artist’s first UK solo exhibition is based on five years of research in Poland around childhood and play. In Podworka (pictured above), children explore the urban environment freely, using the rooftops and dilapidated structures as their playground. Lockhart’s quiet, unobtrusively observational works enable and conjure up complex questions around the viewer’s own responses to space and contemporary childhood experiences of play.
fact.co.uk

Cerith Wyn Evans, Serpentine Sackler Gallery, London
The elusive meanings within Cerith Wyn Evan’s installed environment conjure up fleeting memories and half-told stories as the audience is taken on an ephemeral journey, following a neon text work around the gallery space. Suspended morse-code chandeliers and mechanical flutes are encountered as a composition within the space.
www.serpentinegalleries.org

Harmonious Society at Museum of Science and Industry (MOSI), Asia Triennial Manchester
The imposing industrial brick architecture of MOSI was a suitably sober site for this grouping of thought provoking moving image works by Taiwanese artists. These unnerving pieces mined and reappropriated historical memory to consider the politics of space. In particular, Chen Chieh-jen’s disquieting four screen work, Realm of Reverberations (2014), explores through documentary fiction, the impact that the gradual demolition of Taiwan’s first leprosy hospital has had on its remaining residents.
www.asiatriennialmanchester.com

Mirrorcity, Hayward Gallery, London
Lindsay Seers’ cavernous shipwreck greets the viewer as they enter the exhibition, proposing a meditation on mental health and inherited guilt; a troubled protagonist searches for meaning after discovering that the dance that inspired her to begin her career is from a sequence in a Nazi propaganda film. This wide-ranging group show contains a number of hits and misses from London-based artists, with the successes making it well worth a visit.
Until 4 Jan 2015, www.southbankcentre.co.uk

Revolver II: Matt’s Gallery, London
The audience are taken behind (and above) the scenes of Matt’s Gallery in the second of three curatorial collaborations between Michael Newman & Robin Klassnik. Highlights included Bronwen Buckeridge’s Occasionally Employing Magic, a site-responsive goose bump-inducing audio piece that occupies the archive room, reimagining its future through an overheard conversation with a trance medium. On the rooftop, Craig Barnes’ installed his painstakingly restored Futuro house. The spaceship-like pod housed a programme of events under the banner of the Centre for Remote Possibilities.
www.mattsgallery.org

Philip-Lorca diCorcia: Photographs 1975-2012, The Hepworth Wakefield
The first UK survey of one of America’s most influential photographers, spanning four decades of his work (pictured above). Known for his constructed narratives yet disguising them as documentary, diCorcia blurs the lines between reality and fiction to question the fundamental notion of photographic truth.
www.hepworthwakefield.org

Esther Teichmann: Fractal Scars, Salt Water and Tears, Flowers Gallery, London
Like slipping into an imaginary world of desire, Teichmann’s solo show at Flowers Gallery offered an ambiguous and dreamy rumination on loss, longing, femininity and the nude. Accompanied by a limited edition artist book with original cyanotype cover from Self Publish, Be Happy.
www.flowersgallery.com

Joan Fontcuberta: Stranger Than Fiction, Media Space, The Science Museum, London
Hoaxes, falsehoods and other unrealities are commonplace in Fontcuberta’s photographic interventions, all explored in this fantastical exhibition. Testament to how easily our behaviour and thinking is manipulated in the digital age.
www.sciencemuseum.org.uk