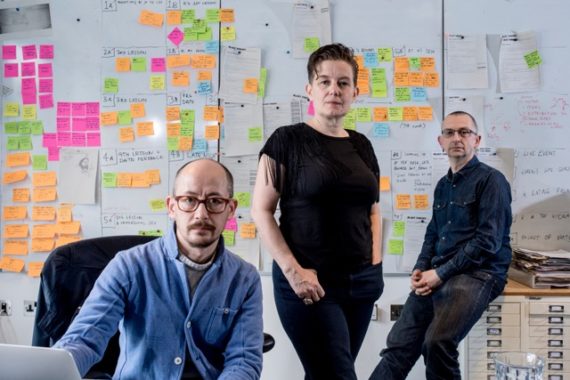 The award from the Korean art centre, which celebrates the work and legacy of the Korean-American artist Nam June Paik (1932-2006), includes prize money of US $50,000 and an exhibition at the the centre during the second half of 2017.

The prize – not to be confused with the Nam June Paik Award, which this year was won by Lawrence Abu Hamdan – was established in 2009. It aims to recognise ‘experimental and innovative’ art works that reflect Paik’s approach, bringing together art and technology in a way that interacts with audiences and encompasses music, performance and visual art.

Soh Yeong Roh, the head of this year’s selection committee, said: “Blast Theory stands out in their wide-ranging usage of various media such as theatre, internet, film, on-offline games, and recently, the field of data science. I would call them the most contemporary media poets of this age.”

Blast Theory’s Ju Row Farr said: “It feels fantastic to win this award for all the work we have made over the last 25 years. It is an honour to be recognised in relation to Nam June Paik, whose pioneering work set the stage for much of the artwork with technology that has followed.

“We accept this prize in the sure knowledge that we would not have made this work without so many fantastic people who have supported us and helped us along the way.”

Blast Theory is currently working on 2097: We Made Ourselves Over, produced in collaboration with Aarhus 2017 European Capital of Culture and Hull UK City of Culture 2017.

The new, interactive work sees the artists working with communities across both cities in order to create an imagined future. It will include a series of on-location sci-fi films, an interactive smartphone app and public events.