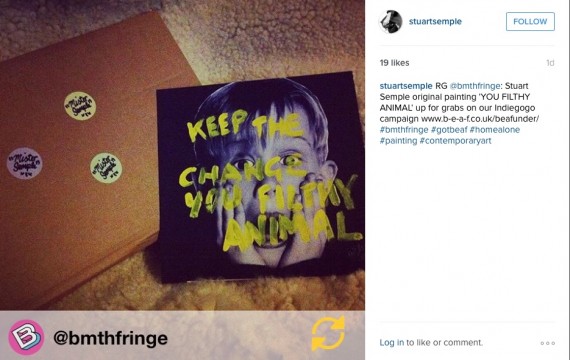 Bournemouth Emerging Arts Fringe has launched an Indiegogo crowdfunding campaign to raise funds for this year’s festival in the south-coast town.

The festival, which takes place 15 October – 1 November,  is now in its second year. Organiser are seeking to raise £2500 to support the delivery of the event.

The crowdfunding campaign, which has just over two weeks to run, offers a number of perks in exchange for pledged support. These include a festival badge for £7, a branded tote bag for £20, and an original work donated by the Dorset-born artist Stuart Semple for anyone with £1500 to spend.

Run by volunteers, the multi-artform festival takes place across Bournemouth town centre and suburbs. “One of the things that makes this festival unique is that anyone who wants to show their work during the festival can,” explains festival coordinator David Nock.

“We received over 170 proposals from both local artists and creatives with a connection to the town. The fringe represents the diverse range of voices and art forms that make our community great. For many artists, this could be the most significant platform opportunity they’ve had to date.”

As part of its fundraising campaign, there will also be a two-day fundraising event on 29-30 August at 60 Million Postcards cafe and bar on the town’s Exeter Road. The event will feature DJs, stalls, spoken word performances and a raffle from 1-9pm each day.

“Last year’s festival showed just how much potential there is for an event like this in the town,” adds Nock. “We really hope that with community and local business support we can continue to grow the festival and create something really remarkable for Bournemouth.”