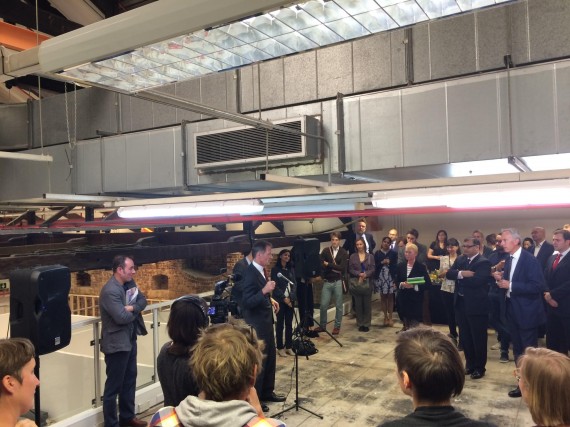 The site – which was formerly the home of News International – will house 90 artist studios. And with 75% already filled, the uptake has been positive, particularly at a time when there are suggestions artists are vacating the city due to rising rent prices.

Speaking at the event, Serota said: “This venture is crucial to bringing artists back to the centre of the city. Unless we get more investment like this artists will be pushed further to the margins.”

Serota also urged Arts Council England, Greater London Authority and developers to work together to preserve the important role artists play in communities. He said: “Artists, particularly young artists, need to be in contact with one another. The kind of enterprise Bow Arts represents is critical to the future of the arts. I urge you to work together to realise more projects like this.”

Munira Mirza warned that artists are paying the price for the London being a magnet for wealth. She commented: “Artists are struggling to survive in the capital. The city attracts talent and wealth, which is no doubt a positive, but it also creates challenges to artists living in central London.”

She claimed increasing residential prices are pushing artists out. “It is the reason this development is so crucial. When artists come together in a community they create something special. Artists’ studios should not be pushed to the margins. Congratulations to Bow Arts. I hope others will follow suite.”

Marcel Baettig, director of Bow Arts, said: “It is amazing to see this come together. There is a buzz around the place already and it is exciting to think what the impact will be on not only the artists who are taking on the studios, but also the local community in Wapping.”

London: expensive but the place to be?

Pia Bramley is one of the artists moving into the new complex. She said: “I think it’s great that a new studio is opening. I have friends who are moving out of London, partly due to the cost, but in some cases because their studios are being redeveloped into luxury flats.

“It’s only going to get worse. Taking this into consideration, I feel really lucky to be joining such a strong and supportive community like Bow Arts.”

Fellow studio artist Jeremy Evans agreed, saying that although it’s becoming more and more difficult to survive in the capital, the overall benefits are worth it. “The bottom line is that the majority of artists are still based here. Being part of such a diverse network helps stimulate your practice and develop your work.

“I don’t want to sound too London-centric but ultimately the majority of opportunities are here. I honestly can’t imagine leaving.”