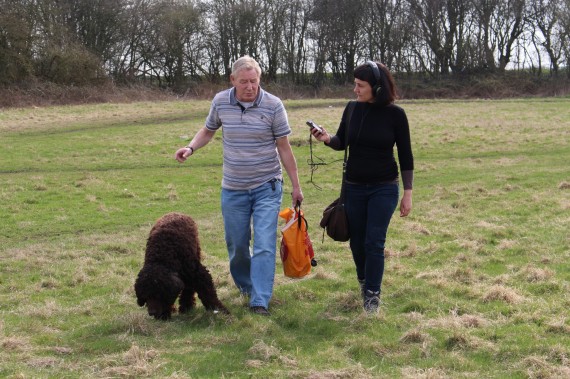 The latest project from London-based artist Layla Curtis is, quite literally, breaking down barriers.

Commissioned by StoreyG2, the organisation formerly known as Storey Gallery which now focuses on artists’ projects in public spaces around Lancaster, Curtis has produced a new iPhone app called Trespass. The free download does exactly what is says on the tin, inviting the public to enter private land without the owner’s permission.

The site in question is known as Freeman’s Wood and is located on the edge of Lancaster close to the River Lune. It has been used by local people for decades, and is regarded by many as common land. However, in 2012 the current landowners (a property investment company registered in Bermuda) installed a fence around the plot resulting in public access, in theory, coming to an end.

Trespass contains audio tracks compiled from interviews Curtis carried out whilst walking round the site with local residents. “They shared memories and personal accounts of how they use the space,” she explains. “All kinds of recreational activities were discussed: bird-watching, foraging, cycling, dog-walking, den building and BMX biking.”

These routes were mapped by GPS and plotted into the mobile app, with users invited to walk the same journeys whilst listening to the stories. Three audio tracks are available instantly to anyone who downloads, although to access the full content users must cross the boundary and ‘trespass’ on the restricted site.

Has the project encountered any problems so far? “We did have a few issues getting the app approved by Apple for inclusion in its app store. This delayed the release for a few months whilst we appealed. In England trespass is a civil rather than a criminal offence, and access to the land is currently in dispute. Apple suggested we had had broken one of the clauses in its terms and conditions, which is ‘encouraging criminal or reckless behaviour’. This isn’t the case.”

For Curtis the work instead provides a valuable oral history of the site and encourages thoughtful debate surrounding issues of landownership. She comments: “The public must decide for themselves whether to fully cross the boundary. There are several breaks in the fence and well-worn footpaths still weave across the site, suggesting it is still being used.”

Curtis hopes to raise enough funds to develop an android version of the app. “That is the aim. In the meantime, we’re asking people to share their experiences on Facebook and Twitter using the tags #Trespass and #FreemansWood. The community is growing.”

Corners of the continent: new online platform brings artists and audiences together

Yuri Pattison: “There needs to be more knowledge sharing within the London art community”