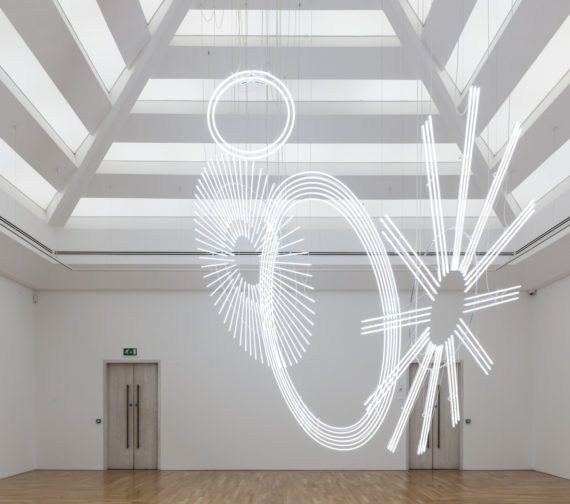 New installation by Cerith Wyn Evans unveiled in Cardiff The neon sculpture entitiled Radiant fold (…the Illuminating Gas) draws inspiration from Marcel Duchamp’s iconic work The Bride Stripped Bare by Her Bachelors, Even. It has been created specifically for Amgueddfa Cymru – National Museum Wales and is the second donation made through the Contemporary Art Society’s Great Works scheme, which aims to tackle the absence in UK museums of works by major British artists over the last 20 years.

Raven Row to offer free spaces While the east London-based gallery is taking a break from exhibitions it is offering five ex-gallery rooms, free of rent, for up to one year. Groups (interpreted as consisting of three or more people) or organisations that are based broadly in the visual arts, can apply. Cross-disciplinary work will also be considered. Raven Row say the rooms will not be available for public exhibitions, events or open meetings, with activity envisaged as being primarily desk-based.

Quays Culture among 28 organisations to receive a share of £7 million from Greater Manchester Culture and Social Impact Fund The digital and interactive art commission programme based at MediaCityUK, Salford Quays, will use the funding to develop outdoor arts and cultural events including its Lightwaves festival of digital light commissions.

North east arts and heritage organisations favour EU partnerships – in spite of Brexit Cultural organisations in the north east of England are keen to work with EU partners over those from the rest of the world, a new survey suggests. The survey by the North East Culture Partnership illustrates that working with EU countries remains easier and more affordable than collaborations further afield.

It also shows that despite a 14% decrease in the number of European countries working with North East culture organisations, there has been an even bigger decline in collaborations with the rest of the world.

Polish art world calls on national museum to stage ‘major international show’ against fascism In an open letter, agroup of Polish art historians, curators and artists has called on the directors of the National Museum in Krakow to stage a major international exhibition against the rise of far-right nationalism in the country. The country has seen a marked rise Poland in right-wing activity since the populist Law and Justice party (PiS) was elected in 2015.

The letter states: “In the face of growing antipathy towards the Other and increasingly frequent attacks on people with different colours of skin, in the context of the brutal contempt demonstrated towards minorities (whether ethnic, political, ideological, or sexual), and with the creeping spread of the low-level insensitivity to violence inculcated by this xenophobia and nationalism, the National Museum in Krakow has an important mission to fulfil.” The full letter can be read here.

Further arts cuts expected in Scotland as local authorities warn of funding shortfall Warnings have been issued for services such as arts funding, charity grants, community wardens and bin collections. The news comes despite the Scottish government ending its council tax freeze, allowing local authorities to implement a 3% rise.

Quoted in The Scotsman reports, Labour MSP James Kelly, blamed the Scottish government, saying: “Any hypothetical benefit from the SNP’s changes to the tax system will be wiped out by council tax increases — increases that are happening because the SNP has left local government with a £386 million shortfall.”

Grenfell Tower to become memorial Kensington and Chelsea council say that the future of the site will be decided by the local community and it has no other plans for the location of the devastating blaze that took place on 14 June 2017.

Shahin Sadafi, chair of Grenfell United, said: “We are pleased that eight months on from the fire we finally have agreement that the bereaved, survivors and community will be at the heart of deciding the legacy of the site. We hope working together to create a fitting memorial will be part of a healing process for everyone affected.”

Meanwhile, the artist and film director Steve McQueen is continuing to work on his Grenfell memorial film, which he began late last year. McQueen filmed the tower from a helicopter on Monday 18 December to make a non-commercial artwork that will not be shown for at least two years.

Scottish Youth Theatre to close after losing Creative Scotland funding The Glasgow-based company applied for regular funding from Creative Scotland but did not receive it leaving a ‘significant funding gap’. The 40-year-old organisation’s alumni includes high-profile actors such as Gerard Butler and Karen Gillan.

In a statement the theatre said: “This represents a gap of around a third of our required income. Without a realistic expectation that we would be successful in securing financial support in such a limited time to meet the significant funding gap, we are left with no other realistic option but to cease trading on 31st July 2018.”

Although it was not a regularly funded organisation from 2015-18, the theatre received £400,000 from the Scottish government through Creative Scotland.