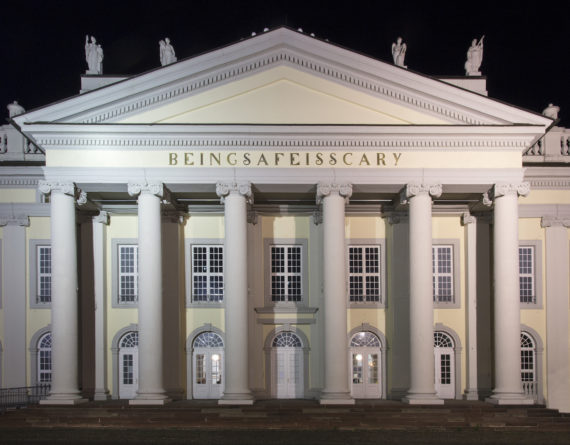 Documenta faces 7m euro deficit, seeks financial help The company that runs Germany’s Documenta art exhibition is seeking help from the state of Hesse and the city of Kassel, where the quinquennial event takes place. The local Hessische/Niedersächsische Allgemeine newspaper said Hesse and Kassel had each agreed to take over loan guarantees of 3.5m euros. Documenta 14 finishes on 18 September.

Far-right criticism shuts down Brazil’s largest ever queer art exhibition On Sunday 10 September, Santander Cultural – a gallery spaced sponsored by the eponymous Spanish bank – shut down ‘Queermuseum’ after conservative critics accused it of promoting blasphemy and pedophilia. The show opened early August and featured 85 artists and 263 artworks ranging from the mid-20th century to today.

My portrait of @gabilardies just won the young artist award in the #bpportraitaward ! Such an honour. I’m so lucky to have her in my life <3

Artist donates part of BP prize money to Greenpeace in oil sponsorship protest Henry Christian-Slane, an artist from New Zealand, won the BP young artist award at the National Portrait Gallery for a painting of his partner Gabi. The high-profile prize, which was chosen out of 2,580 entries, came with £7,000 prize money. The artist said his donation of £1,000 is a protest against his art being used to promote the oil company.

Rachel Whiteread: Turner prize winner criticises ‘plop art’ The artist, who is about to get major retrospective at Tate Britain, says public art is often ill-conceived and works should suit locations. Whiteread declined to name which sculptures she thought were ‘plop art’.

Giant portrait of toddler peers over US-Mexico border wall French artist JR erected the cut-out of the boy that stands nearly 20 metres tall and is meant to prompt discussion of immigration. The artwork was unveiled the week President Donald Trump said he would end a program that has allowed young immigrants who were brought to America illegally as children to remain in the country.

Interested in our #Banksy? Will be sold on Friday. Get in touch: https://t.co/dK6rHjEgZT Images courtesy of https://t.co/yGtn9MAx1W pic.twitter.com/ZHOvn2iyxJ

New Banksy artwork targets London arms fair Art the Arms Fair is organised by artists and activists in opposition to Defense and Security Equipment International (DSEI), one of the world’s largest arms fairs. Banksy is only one of a number of artists who have contributed works to the alternative fair, which will sell off the pieces and donate proceeds to the UK-based organisation, Campaign Against Arms Trade.

Celebrity art dealer jailed for stealing works worth £500,000 Jonathan Poole sentenced to four years after admitting 26 offences against nine victims, involving works by artists from Rodin to John Lennon. The prosecution suggested that Poole, from Poulton, Gloucestershire, may have been using the money to fund a gambling habit, service debts or was stashing it away for his future.