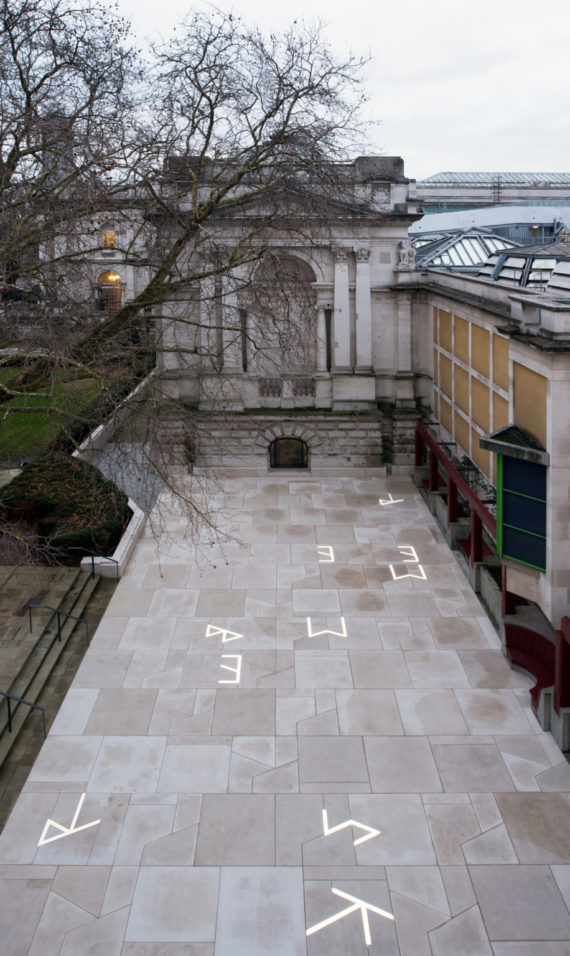 Martin Boyce commission at Tate Britain unveiled The Glasgow-based Turner Prize winning artist’s installation outside the Clore Gallery features a paved terrace with the words ‘Remembered Skies’ spelled out in illuminated letters in a font based on the geometric shape of concrete trees created in 1925 by the sculptors Jan and Joe Martel.

Explaining the work, Boyce said: “The phrase ‘Remembered Skies’ came about through Turner’s paintings. While watching a documentary on Turner the question of composition was raised and how Turner would at times construct his compositions by moving mountains, repositioning trees and the framing of buildings. For his skies the constant changing conditions of clouds and light would necessitate a composite of the seen, imagined and remembered.”

Alex Farquharson, director of Tate Britain, described the installation as “sculpture in the form of architecture. Combining references to Turner’s landscapes and mid-20th century art and design, it will quietly transform the terrace outside the Clore Gallery.”

Lottery shortfall forces ACE to cut 2018-22 budget by £156m Due to an annual drop in Lottery money of £39m, Arts Council England has cut its budget and restructured its funding streams including the introduction of a new name for Grants for the Arts, which will be known as the Arts Council National Lottery Project Grants.

Northern towns and cities invited to be ‘Inspired by’ Great Exhibition of the North in 2018 Submissions are wanted for the exhibition taking place 22 June to 9 September 2018 in Newcastle and Gateshead that celebrates ‘great art and culture, design, and innovation from across the North’. Organisers are asking towns and cities in the area to get involved by putting forward events, experiences and performances inspired by the show.

Early submissions to the ‘Inspired by’ programme have included the city of Bradford and its summer festivals and events programme. Meanwhile, in Lancashire new visitor trails will explore the three themes of Great Exhibition of the North – art and culture, design and innovation.

Arts Alive Wales to be rebranded as Peak The new name and look will coincide with the 30th anniversary of the educational arts charity. Explaining the change, its creative director Rebecca Spooner said: “Peak seemed a natural choice for our new name. It is short and memorable, and connects to our unique rural location as well as pointing to the ambition of our work with communities and professional artists.”

Since 1988, the charity has worked across mid and south east Wales with professional artists to provide opportunities for active participation in the arts, particularly for children, young people and vulnerable groups. Recent project partners include MIND, Young Carers, Women’s Aid, Monmouthshire Housing Association, the Alzheimer’s Society and Powys Youth Service. 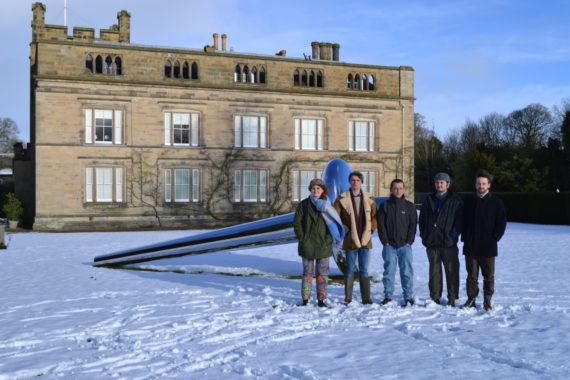 Cheeseburn Sculpture announces shortlist for its third Gillian Dickinson North East Young Sculptor of the Year 11 artists have been shortlisted for £6,500 commission to create a new sculpture at Cheeseburn in Northumberland. 30 artists aged 18-25 applied from across the North East, with a number of the region’s universities represented on the shortlist.

Last year’s winner, Peter Hamner, will unveil his winning installation Plato’s Lair at Cheeseburn this May.

Cut in Northern Ireland arts budget ‘could signal final blow’ A joint statement by over 50 arts organisations states that plans to cut the country’s arts budget by over 8% in 2018/19 would have a devastating impact on the sector. They have called for meetings with Northern Ireland secretary Karen Bradley as well as the head of the civil service David Sterling and the permanent secretary of the Department for Communities, Leo O’Reilly.

Artists create a cemetery for the ‘things Donald Trump killed in 2017’ in one of his golf courses Commemorating the anniversary of Trump’s inauguration, guerrilla street art collective Indecline created the installation at a golf course in rural New Jersey. Titled Grave New World, the work features gravestones marked with concepts such as ‘Decency’, ‘The Last Snowman’ (referencing the US pulling out of the Paris Climate Agreement) and ‘Our Future’.

In other Trump news, the Washington Post reports that following a request from the White House for the loan of Van Gogh painting, the Guggenheim’s chief curator Nancy Spector instead offered Maurizio Cattelan’s solid gold functioning toilet, America, instead. An email sent by Spector to the White House and seen by the newspaper stated that “should the President and First Lady have any interest in installing it in the White House” the artist was happy to offer it “to the White House for a long-term loan”.

Stagnating progress for schools’ Artsmark award Arts Professional reports that the Arts Council England scheme promoting creative learning in schools has seen disappointing engagement figures, with the proportion of schools involved increasing by just 1% in the past 12 years. The scheme has had over £10m of investment since 2006/07.