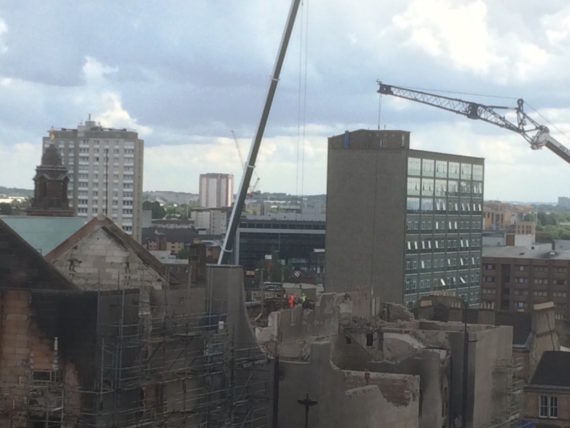 Calls for public inquiry as residents and businesses are still not allowed to enter Glasgow School of Art exclusion zone Two months on from fire that devastated the school’s Mackintosh building a number of properties remain inaccessible, with the current work to stabilise the building is scheduled to finish in around five weeks.

Tom Inns, the school’s director, has told the Guardian that he hopes the security cordon, imposed by Glasgow city council building control, will be reduced in a fortnight.

Gill Hutchison, owner of Biggars music store, has responded by saying that she has lost at around £120,000 in business and relocation costs since the fire. She commented: “The feeling emerging among the businesses is that the cordon is no longer about public safety but to allow high-access equipment to move freely. We’re feeling very low. It’s tortuous for people.”

Paul Evangelista, who owns Absolut Hair and Beauty, added that although the Scottish government has offered a £5m fund to help the effected businesses “most insurers will simply knock it off their final payout.”

Adrian Nairn, representing the Garnethill Displaced Residents Group, said that an inquiry needs to take place, not only into how the fire started but also the subsequent ‘crisis management’ of the situation. He also questioned the legality of the cordon itself.

Nairn commented: “Imagine being told to leave your home in the clothes you’re standing up in, in the middle of the night, and not come back for eight weeks, bearing in mind that you might need medication or hearing aids that you’ve left behind in the rush, or that you might be going on holiday because it’s the summer, and need your passports.”

British Museum returns looted artifacts to Iraq The works were seized by authorities more than 15 years ago from a local dealer, but were only given to the British Museum for analysis and identification earlier this year. The eight objects are originally from the archaeological site of Girsu, which is a Sumerian city in Tello in southern Iraq.

As ArtForum reports, Salih Husain Ali, Iraq’s ambassador to Britain, said: “Such collaboration between Iraq and the United Kingdom is vital for the preservation and the protection of the Iraqi heritage. In Iraq we aspire to the global cooperation to protect the heritage of Iraq and to restore its looted objects.”

Palestinian cultural centre destroyed in airstrikes The al-Meshal Foundation in the Gaza Strip, which was one of the few cultural centres in the region Palestine, has been destroyed during a series of airstrikes by Israeli military forces. The five-story building, which housed a theatre, library, Egyptian community centre, plus offices for several cultural organisations.

The Israeli Defence Forces said the building was targeted because it was allegedly being used as a headquarters for Hamas. However, the artists and creatives that worked there have vehemently denied this.

In an interview with Middle East Eye, poet Hanin al-Holy said: “They only targeted the building because they insist on destroying anything that brings life to the Gaza population. Al-Meshal centre was a symbol of culture, something that reinforced our Palestinian identity. They targeted it because art is, too, a form of resistance.”

Theatre director Idrees Taleb added: “Israel says its forces targeted the building because part of it was used by Hamas. But I have been there for more than eight years, there has never been anything related to any political party. Not in the past, and not recently.”

Egyptian curators denied UK visas to attend conference entitled ‘Breaking Barriers’ The UK Home Office rejected requests for visas from the curators to attend the event in Swansea, despite them having received grants from the International Council of Museums to attend. The grants were designed to cover flights, accommodation, and living expenses while in the UK. Despite this, immigration officials cited low income as the reason for the rejection.

One of the curators, Abdelrahman Othman, is an award-winning curator at the National Museum of Egyptian Civilisation and an employee at the Egyptian government’s Ministry of Antiquities. He told the Museums Association’s Museum Journal: “I didn’t see a reason to refuse it. I have a family in Egypt, I’m a PhD candidate and a government employee, and I have a good travel history.”

Women in the arts in Argentina protest rejection of Senate bill to legalise abortion Members of Nosotras Proponemos (We Propose), a feminist collective of women in arts professions in Argentina, participated in demonstrations supporting the bill that were attended by over 1m people across the country on 8 August.

In a statement, Nosotras Proponemos said: “We are appalled. The negative vote is demonstrative of the influence of the Catholic Church and patriarchal nature in and of our country.”

However, the group said it is optimistic that change can be brought about. “It is clear that we have come out of the darkness. We are here, present, audible and visible, as was clear from the more than a million supporters on the streets yesterday all over the country.”