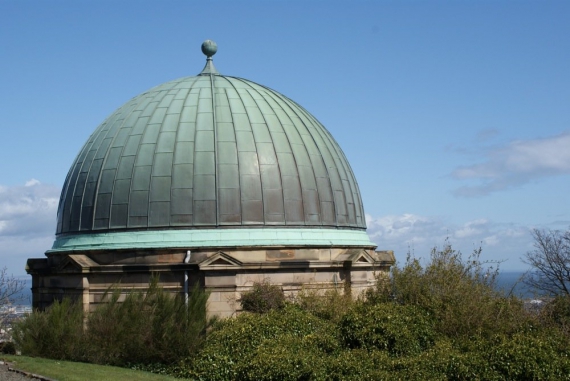 The new City Dome gallery on Calton Hill, Edinburgh, is the first building to be completed in a major redevelopment of the City Observatory site, where visual arts organisation Collective is now based. Opened on 17 January, it houses Collective’s International Programme and launches with Faire le mur, a film by Paris-based artist Bertille Bak. The second exhibition to come from a collaboration with LUX, it forms part of the Factish Field series – an examination of artists’ film and anthropology which includes screenings, talks and commissions.

Bak’s 2008 film is accompanied by a set of spot-lit tapestries, incomplete copies of works by old masters (the likes of Goya and Poussin) depicting scenes of revolution and lost paradise. Made by the people of Barlin, an old mining community in Northern France where the work was filmed, the tapestries re-form the real-life exodus experienced by the village’s former inhabitants.

The City Dome is fitting for the story, seemingly abandoned yet strangely habitable. It is also cold – that is what you get for climbing a hill in Edinburgh on a clear Sunday morning in January. Such a lack of insulation is just the sort of thing that makes you think: what’s in store in the warmer months?

“The opening of the dome completes phase one of our redevelopment,” says Kate Gray, Collective’s director. “We’re now able to run two concurrent exhibitions alongside our off-site programme [All Sided Games, which began with Collective’s contribution to Edinburgh Art Festival 2013] and our growing series of Observers’ Walks. We aim to complete phase two by January 2016.”

Phase two will open other parts of the remaining site to the public. For now, the City Dome exhibition is complemented by existing works in Collective’s temporary building at the observatory’s entrance (Goldin and Senneby’s Anti-VWAP is currently showing until 26 January). Collective has also commissioned Observers’ Walks featuring artists’ guided tours around Calton Hill and its history – currently Ruth Ewan and Astrid Johnston’s Memorialmania, to be joined by Bedwyr Williams’ contribution in March.

“The new expanded programme and site allows us to illustrate the scope of our work: a collection of projects to be encountered in different configurations at different times,” continues Gray. “Satellites, our development programme for emergent artists based in Scotland (formerly New Work Scotland) is now an extended year-long opportunity with its own dedicated space.”

Dane Sutherland, a curatorial development intern on the Satellites programme, adds: “The opening of Faire le mur brought in a new audience, not just art students and regular art goers but families and tourists who were interested in the site historically. It is this sort of footfall that makes sense of Collective’s new positioning.”

Collective will host Sutherland’s curated programme for Satellites in May and June this year. As a committee member at the artist-led space Embassy in Edinburgh – a gallery whose beginnings were not dissimilar to Collective’s and whose positioning changes depending on funding and rental costs – Sutherland has a dual view of Collective’s new position at the top of the hill: “It now joins a constellation of artist-led and commercial galleries in the north of Edinburgh, which helps in broadening interest in the gallery’s activities. It is also a focal point for the art community to rediscover an historical site.”

Having its programme at one site is a positive thing for Collective’s identity and the City Dome is a navigable place to start; a move for them had to be a progression. For now, though, it is a projected view of what is to come – and there is a lot to look forward to. All Sided Games will join exhibitions in Glasgow as part of the cultural celebrations for the 2014 Commonwealth Games; there are more Observers’ Walks being commissioned; a wide-ranging Satellites programme is planned; and more Factish Field events are due. A good job, then, that they have well-placed signs to the top of the hill – it will be more than tourists making the climb.

Collective Gallery: view for the future by Richard Taylor