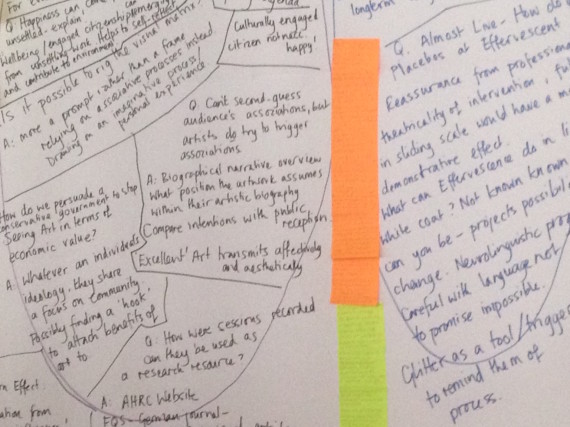 Reflecting on the different examples of socially engaged practice shared at the recent Social Making: Socially Engaged Practice Now and Next symposium in Plymouth, it’s useful to consider Arnstein’s Ladder, a theory of citizen participation devised in the 1960s.

Dr Kelechi Nnoaham, director of public health at Plymouth City Council, introduced the concept of the Ladder in the opening presentation at the symposium, a two-day event devised by the socially engaged contemporary art organisation Take a Part in partnership with Plymouth University. Hosted by Radiant Space, the symposium was packed with speakers, submitted videos, discussion and debate.

Arnstein’s Ladder (below) differs to the usual rhetoric of ‘climbing the ladder’ for economic and social gain. Rather than being about money, it’s about social value. There have been numerous iterations since it was first developed by Sherry R. Arnstein in 1969; in Arnstein’s theory, the rungs of the ladder rise up from ‘manipulation’ at the bottom to ‘citizen control’ at the top.

Arts projects featured during the symposium that came across as having the potential to climb to the top rung were certainly those involving participation through all their stages. To meaningfully respond to community needs, projects need time to develop in a slow, considered and negotiated way. Real change devours time and must be embedded into the communities that the artists work within. 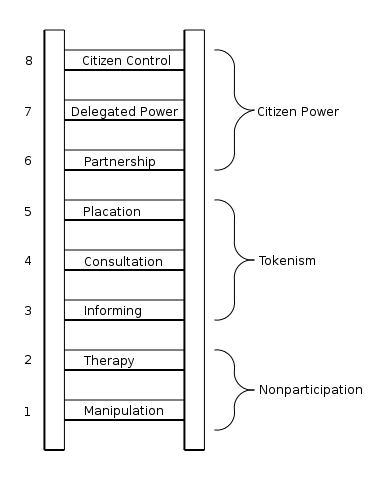 It is important to remember however that, as the sociologists Tritter and McCallum have pointed out, the intention behind the projects, and the behavior of the participants, will influence whether or not citizen control is indeed the goal when it comes to socially engaged art practice. Maybe succession is desirable at the beginning, but other things evolve over time?

Speaking at the symposium, Take a Part director Kim Wide told of the long and slow embedding process that began in Efford, Plymouth in 2009 and has now developed into an effective process of partnership working and planning succession. She referred to the early days of engagement and acknowledged that they didn’t go as hoped, leading to a revised and more successful approach. The projects have evolved over time and are now beginning to work independently.

Samantha Jones, from Liverpool’s Homebaked, described how the original bakery in Anfield, conceived in 2010 by artist Jeanne van Heeswijk as part of Liverpool Biennial, is now expanding from the original bakehouse to a land trust too. These developments possess the potential to create jobs and have a wider impact on communities.

Eloise Malone of Plymouth-based social arts company Effervescent talked about the projects they have developed over the last four-five years in partnership with Banardo’s, evolving from a conversation that began seven years ago.

Malone also explained that Effervescent employ methodologies of ‘social dreaming’, which has a ‘placebo effect’ on the participants, all of which have experienced severe abuse. This effect actively stimulates the growth of new neural networks and pathways; by social dreaming, the participants ‘grow armour’ to keep them safe.

Can artists employ cultural placebos as a useful tool with which to escort people away from past trauma to a more fulfilling place, without the Arnstein’s Ladder model labelling the work as ‘placatory’? Does the ladder allow for individual change, as in the work that Effervescent delivers? I think it should – socially engaged practices are much more complex than the ladder suggests.

All of the projects above illustrate a successful process of letting go and returning activity to citizen/individual control. The projects of public art producers Situations and Turner Prize-winning architecture collective Assemble – both of which were presenting at the symposium – are less likely to move towards the upper rung.

Their work is more weighted to the production of art as an outcome – or conduit – towards experience, than it is towards sustainable participation. The very nature of temporary art projects in the public realm will inevitably mean the communities they create are temporary, too.

Keeping the goal of succession in the centre is admirable, but it may not be relevant to all participatory practices. As Tritter and McCallum state: ‘Such an emphasis on power assumes that it has a common basis for users, providers and policymakers and ignores the existence of different relevant forms of knowledge and expertise. It also fails to recognise that for some users, participation itself may be a goal.’

So in terms of social making, Arnstein’s Ladder offers a guiding principle, but may not be appropriate to every project – we must allow for the agency of the people who participate. The coming together of academics, health experts, housing associations and the arts has real potential to create social capital. We need to consider who holds the power of the narratives – the artists, the marketeers, the politicians or the participants.

The real risk is that if government bodies hold the purse strings, the top rung might be broken and, worse, irreparable.

A Q&A with… George Shaw, painter

Carolyn Black is an artist, producer and writer. She works under the banner of Flow Contemporary Arts as a Produce, curator, project manager. However, having returned t her practice in about 5 years ago the pandemic created a gap in her diary in which she could work 24/7 on her studio practice. Instagram @severnsideartist W: carolynblackart.com. In 2020 she was shortlisted for Trinity Buoy Wharf Drawing Prize, Wells Contemporary, Earthphoto and RWA