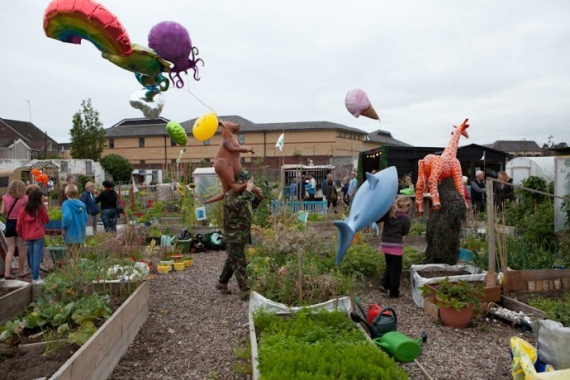 The National Association for Gallery Education, engage’s remit is to represent gallery educators and art professionals in the UK, encouraging greater access to, enjoyment and understanding of the visual arts through gallery education.

Taking place over two days, ‘Landing Place: the local in the international’ examined the relationship between international and grass roots artistic activity through a series of presentations by local and international artist-led groups and organisations. There was also a programme of breakout sessions hosted across Cardiff’s arts organisations and galleries.

This close link with Cardiff’s own art scene created a vital and necessary context in which to ground the debates and discussion. Quite simply, many of the conference attendees had never been to Cardiff before and had not been exposed to its contemporary art practices.

In his introductory speech, conference programmer Mike Tooby outlined some of the reasons for hosting the event in the Welsh capital. He talked about the opportunity to use the current Artes Mundi exhibition and its education work as a case study for bringing international artists into a local community, and also the duality of a bilingual nation that has artists working in both rural and urban contexts.

Many of the presented projects, such as Liverpool Biennial’s work around urban regeneration with Jeanne van Heeswijk and CCA Derry-Londonderry’s examination of working with artists and communities in Derry, put forward the role of the international artist as a catalyst for social change, a regenerative and discursive force that can mobilise society.

When the discussion panel was asked by an audience member, ‘What difference do you hope your projects will make to your local communities?’, it was evident that the contributors saw their work as mutually beneficial for communities and artist alike; an exchange of experience, skills and knowledge.

Although both the projects discussed in Liverpool and Derry-Londonderry were ambitious, interesting and moving, it would have been good to hear more from artists themselves on how their practices were enriched by working in a new context, the processes they went through and how their own experiences fed into those communities and vice versa.

Presentations by Sonia Boyce and Karen MacKinnon were more revealing of the artists’ role within international working. Firstly, MacKinnon discussed the ongoing international project ‘Let’s see what happens’, which involves dialogue and exchange between four Welsh artists and two artists in China. MacKinnon spoke candidly about the conversational nature of the project, allowing the artists to develop ideas and relationships slowly. Rather than a residency or exchange trip, she described the aim of the project to be the “building of friendships, and not about pretending to fully understand when you don’t”.

This sense of cultural fluidity and being in between cultures was echoed in Sonia Boyce’s presentation and the showing of her two-screen video work, ‘Crop Over’, which examines a harvest carnival festival in Barbados. Like the video itself, Boyce spoke articulately about being seen as an outsider by the locals when filming the work and a feeling of not belonging to either a British or Caribeean culture. Her work with ‘Crop Over’, she said, was an attempt to express a need “for another space”.

Boyce’s presentation reiterated many of the key questions asked by the conference: What makes practice global or local? Is differentiating between them productive? How are terms defined? Is ‘the local’ seen by the outsider, experienced by the resident, or a hybrid of the two? From the discussions at the conference, there were clearly no fixed answers but rather a series of exciting ongoing and ever-changing dialogues between artists, curators, communities and audiences.

‘Landing Place: the local in the international‘ took place in Cardiff, 6-7 November 2012.

Advisers and tutors – tools, materials and resources to support tutors and those working in education.

Artists Working in Participatory Settings – bibliography identifying a range of available resources for artists working in participatory settings, produced as part of the Navigator programme by A+ (a-n and Artquest), engage, Foundation for Community Dance, National Association of Writers in Education, and Sound Sense.

Creative Connections – A guide to creative collaboration for artists working with young people.

I am primarily a lens based artist based in Somerset. I am also co-founder and curator of site-specific arts organisation Second Site - recent projects include 'Mobile: Cardiff Constellation', an exhibition of newly commissioned video works showing as part of the arts festival 'May You Live In Interesting Times' in conjunction with Chapter Arts Centre.