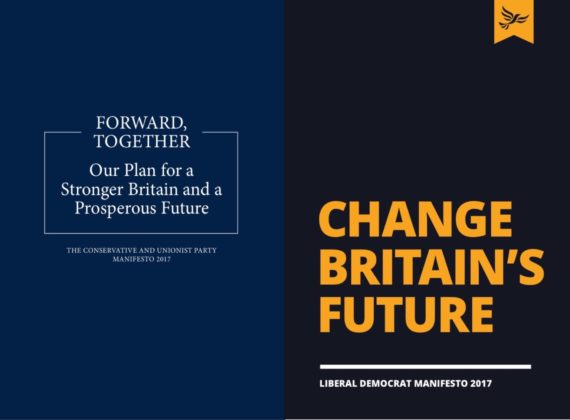 The Conservatives and Liberal Democrats have launched their election manifestos, with varying commitments to the arts.

While the Conservative manifesto, Forward, Together focuses on the impact of Brexit, there is a commitment to offer ‘strong support for the arts’.

This includes ensuring more support outside London, while also offering (as Labour has) to maintain free entry to the permanent collections of major national museums and galleries. The party will also introduce a new cultural development fund to use cultural investment to ‘turn around communities’.

It will hold a Great Exhibition of the North in 2018, to celebrate achievements in innovation, the arts and engineering, while also supporting the development of the new Edinburgh Concert Hall in the 70th Anniversary Year of the Edinburgh Festival.

The other key pledges in the Conservative manifesto include the scrapping of winter fuel payments to better-off pensioners. At the moment, all pensioners qualify for one-off payments of between £100 and £300 each winter.

There will also be an extra £4bn for schools in England by 2022 – partly funded by an end to the current provision of free school lunches for all infant pupils in England.

Liberal Democrat leader Tim Farron has also launched his party’s manifesto. With a heavier focus on the arts in education, the party has vowed to ‘protect the availability of arts and creative subjects in the curriculum and act to remove barriers to pupils studying these subjects.’

The Liberal Democrat manifesto, Change Britain’s Future, states that schools should be free to encourage children to participate in a ‘truly rounded curriculum including the arts, sport and culture that broaden children’s learning and develop their passion for education.’

The party also accuses the Conservatives of ‘wanting to take us back 50 years, to an outdated system of grammar schools and secondary moderns, ignoring all the research and expert advice that show it will damage the life chances of so many children.’

There will also be more support for teacher training places, partnering with higher education and specialist routes such as Teach First in order to recruit teachers in shortage areas such as the arts, plus science, technology, engineering and maths.

Beyond education, the party pledges to support growth in the creative industries, including video gaming, by continuing to support the Creative Industries Council. There will also be tailored industry-specific tax support, plus the promotion of modern and flexible patent, copyright and licensing rules. The party will also address the barriers to finance faced by small creative businesses.

The other key points of the Liberal Democrats election manifesto include a second EU referendum on the Brexit deal, plus 1p in the pound on income tax to raise £6bn for NHS and social care services. There will also be an end to the 1% public sector pay cap.