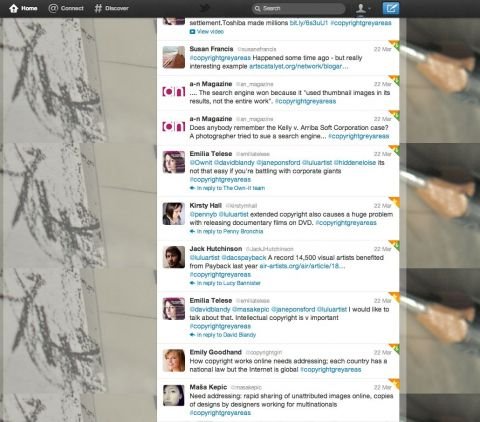 As many of you will know, on Thursday 22 March between 1-3pm @an_magazine hosted its first live Twitter Debate, on the hot topic of #copyrightgreyareas. A huge thank you to all who took part, and spread the word.

The hashtag trended in the UK, we checked the statistics and on average per hour the debate reached 37,358 people… and an hour after the debate had finished the hashtag had reached 45,344people on Twitter. A wide range of creative professionals participated worldwide, showing the importance of the copyright issue across disciplines. The main threads to the discussion and links tweeted in were as follows. The coverage here is by no means exhaustive, it is a large subject with many niches, but opened up the debate and a few fundamentals cropped up again and again:

The value of an original idea
A copyright protects an original artistic or literary work. Copyright does not protect ideas, but the expression of ideas in material form. It is important to keep a good record of your work – sketches, designs, emails. Along with your work that you post online include: Â© (artists name) (year). Watermarking can often spoil an image and is a matter of taste, also is easily removed should anyone choose to, but you can post lo-res images online instead of original files.
How are artists/ writers to make a living unless they exploit their copyright? A record 14,500 visual artists benefitted from Payback royalties last year. Design copies and fakes abound, and many participants in the twitter debate said they had either had designs or artwork copied, and sold on, or knew of people who had. Copying as part of study has always been a good exercise, but until the 20th century it was classed as forgery if passed on as an artist’s own work. Regarding the question of appropriation (which is a larger philosophical debate in itself) and copyright there is the case of Richard Prince v Patrick Cariou to name but one. You can download Lawrence Lessig’s seminal 2004 work FREE Culture, How Big Media Uses Technology and the law to lock down culture and control creativity here.

Many participants in the twitter debate said they have either had designs or work copied and sold on, or knew of people who had, by both big and small companies, or individuals. Professor Ian Hargreaves, published a review in May 2011 recommending an overhaul of archaic intellectual property laws that obstruct innovation and economic growth (estimated to be up to £7.9 billion) , especially online. “The path laid down in this review would also, over time, mean that IP law, including copyright law, would become clearer and be observed by most people without controversy.” Design, however, (unlike patents and copyright) is not directly mentioned in the review’s terms, hence the campaign for Equal Rights for Design UK. Following the Hargreaves review the Intellectual Property Office (IPO) has announced that a small claims process for £5,000 will be introduced at the Patents County Court for cases involving copyright, trademarks and designs.

Copyright and the web
Is there a fundamental dissonance between copyright, and the internet which is built on rapid file sharing? Not according to the UK Copyright Service, which responds by saying “It makes no difference how the work is stored or published, the law still applies.”

It would appear that Moral Rights, or the regard with which they are held in the US, are the largest problem, and boil down to acknowledgement of creativity and authorship. Moral Rights historically come from France, last as long as the copyright in the work, and include:

1) The Paternity Right (Attribution)
The right to be identified as the author of the work.

2) The Integrity Right
The right to object to addition, deletion, alteration or adaptation, misuse for example.

Moral Rights apply to any copyright works of artists who were alive on or after 1 August 1989. However in order to obtain the benefit of the Paternity Right, the artist must assert (communicate) the right to be identified as the author of the work in writing (as outlined in DACS Copyright FAQs)

US law, however, doesn’t hold Moral Rights in high regard and also doesn’t grant them to creators of literary or musical works. As Tumblr and Pinterest originated in the US, perhaps this helps explain their vague approach to attribution? Add to the mix the reblog/repin button (according to RJ Metrics business intelligence firm more than 80% of all Pinterest pins are repins, Tumblr is similar ) and images can spread like wildfire across cyberspace without any attribution. The work then remains an anonymous image, open to misinterpretation and misuse, and continues to be reposted as such. Netiquette is something we can reinforce by asking for attribution of images where we see them missing, as I’ve seen some people do on Tumblr and Pinterest, by upholding Fair Use ourselves, or posting links to artists sites rather than their images. Fair Use includes posting a review or critique along with someone’s image/piece of work as long as they are attributed and the work is kept in context. Much infringement is down to lack of knowledge and education.

Interestingly, Pinterest sent its users an email over the weekend notifying them of updated terms of service in effect from 6 April, including the following, “Our original Terms stated that by posting content to Pinterest you grant Pinterest the right for to sell your content. Selling content was never our intention and we removed this from our updated Terms. We released simpler tools for anyone to report alleged copyright or trademark infringements. Finally, we added language that will pave the way for new features such as a Pinterest API and Private Pinboards.”

Here are Pinterest’s new copyright terms, including a copyright complaint form button. The question remains, do the terms of service still leave the user liable for both their legal costs and Pinterest’s?

Should you wish to prevent your images being pinned (as Flickr has with its All Rights Reserved images ) there are links to tutorials for various sites here. Tumblr has no such option as yet,

Good Copy, Bad Copy A Documentary on YouTube about the current state of copyright and culture.

RiP!: A Remix Manifesto A Documentary particularly interested in the legal grey area of remixing existing works, partly produced by the National Film Board of Canada.

Fair Use and using the works of others

Creative Choices outline a step by step guide to how to protect your copyright .

DACS Payback paid out on average £300 per artist last year. Artists say the small amounts really matter and can often make the difference between making the studio rent that month or not.

Cambridge Colour offer advice on how to make images harder to copy online.

Creative Commons is a simple licensing system based on copyright, allowing users to share their work, rather than All Right Reserved copyright. White and Simpson created a Cultural Commons , an Open Music Archive, exploring ways of distributing work while still maintaining some control over it’s use.

Artquest commissioned an ongoing series of films for ArtlawTV showing how different artists respond to different legal problems in their practice.

Creative Barcode is one unique barcode applied from concept to completion that tags and ties all development work together and protects it.

Performance art and copyright law is discussed in this Artlaw article for Artquest. More information can be found in the DACS Copyright fact sheets, including information specific to different creative practices, and European law.

Registered composers benefit from free legal advice with Villa Music Rights , and there is much discussion and advice on the Sound on Sound forum where professionals and amateurs can talk through the issues, both practical and philosophical.

Reverse Image search engines. such as TinEye and Google Image search can be useful ( Go to Google > Images > Camera icon on the box & upload your jpeg, file, or drag image ).

The organisations listed below provide expert current advice and guidance, solutions and in some cases legal support.

Before you go, do one thing now, and sign the petition for Equal Rights for Design, to help grant design the same copyright as works of literature, drama, music, film and art.

Thanks to all who took part, see you at the next @an-magazine live twitter debate.