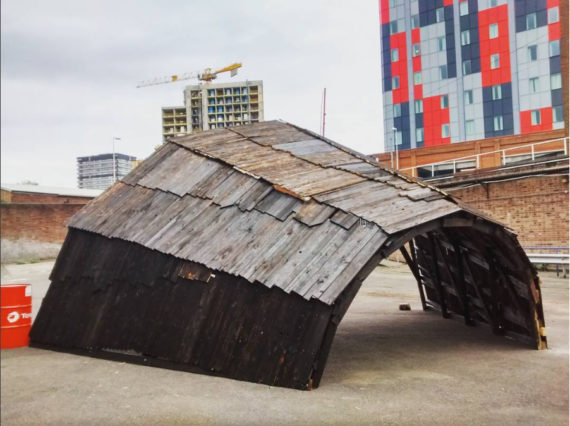 It seems fitting that the first Coventry Biennial of Contemporary Art elects ‘The Future’ as its umbrella header and hashtag: it impresses upon us a juncture within today’s landscape of political and economic uncertainty. The question, though, is how does Coventry differentiate and distinguish its ‘future’ from the plethora of other arts programmes that are also adopting this broad and topical theme?

The biennial’s title exhibition takes up residence in the old Coventry Evening Telegraph Building – now abbreviated to The CET Building. It’s a vast cavern and hidden testament to the scale and efficiency of the print newspaper industry. Biennial director Ryan Hughes and his team have taken on the challenge of curating a group show which spans the entire building: this provides the 21st century audience with the combined experience of viewing contemporary, site-specific artworks while discovering an industrial relic prior to its scheduled redevelopment.

Unlike similar public shows in ex-industrial spaces, we are free to roam. Refreshingly, our route is not dictated; we follow the natural flow of the building, from the reprography floors to the managerial offices and former owner Lord Iliffe’s deluxe 1950s apartment.

Nearly all of the works exhibited are site-responsive: some provide self-referential dialogues such as Natalie Seymour‘s 2017 installation which overlaps the yellow lighting of a photolithography cleanroom with a digital photograph of the space it once occupied. There’s also Gregory Herbert‘s Untitled (2017), a water tower constructed from ‘Real Useful Boxes’, plumbing supplies and a pump, which imitates the gurgling of a water cooler within a former canteen. 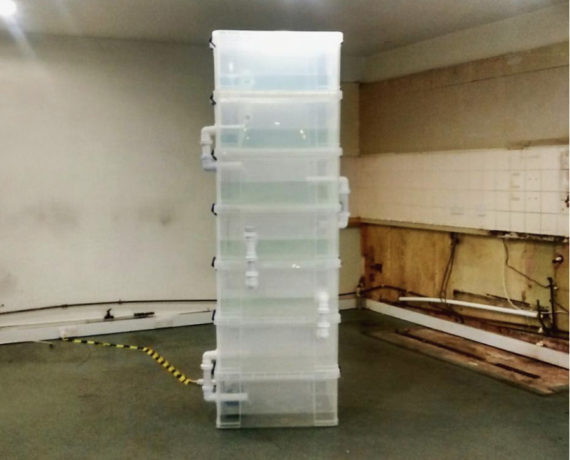 Other works converse with their surroundings in quieter ways. These are predominantly pre-existing pieces such as Stuart Whipps‘s digital chromogenic prints AMR 733V, Detail 001 (2015) and AMR 733V, Detail 002 (2015), which are placed within the colour darkrooms where developing chemicals can still be smelt. Elsewhere, the top-floor boardroom is enlivened by Darryl Georgiou and Rebekah Tolley‘s Magician Walks into the Laboratory (2017) which draws on geopolitical Cold War ideologies and CIA ‘remote viewing’ transcripts.

Throwing the net out to broader contemporaneous issues is Emily Speed‘s video installation, Rooms Designed for a Woman (2017), which comments on the hierarchy of spacial decision-makers, designers and users. It provides an interesting contrast between the film’s focus on women’s relationships with the built environment and the rugged, more masculine printing floors that lay beyond.

Holly Rowan Hesson‘s No More Disco (2016) references the acquisition of space for cultural purposes through movable Perspex dance-floor squares. Aesthetically, Hesson’s piece sits comfortably within an interior loading bay, the space’s yellow lines reflected in the Perspex’s geometry. In contrast, Speed’s appears segregated from its surroundings and even other artworks; this ‘separateness’ is a recurring characteristic that, due to the sheer scale of the building, tends to overpower the intended minimalist approach. 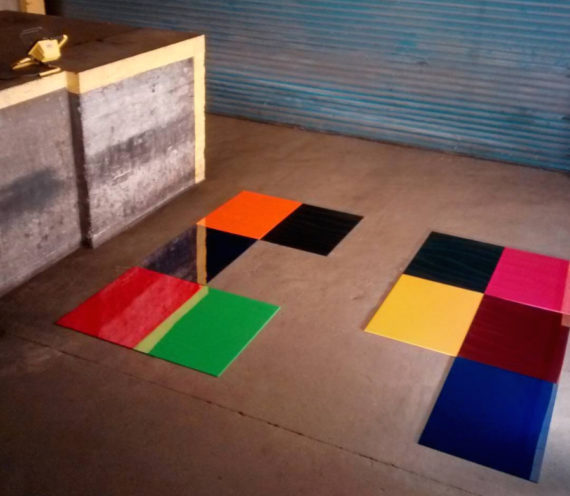 A prominent quality of the central exhibition is its breadth of emerging, mid-career and established artists, of all ages: in the former ‘art room’, Terry Atkinson‘s miniature paintings from the 1980s-1990s are hung with Nicole Mortiboys’s Olive in a Paint Punch Up (2017) to mimic the satirical illustrations that might accompany a newspaper.

In terms of artistic medium, the biennial succeeds in spanning the spectrum: Mira Calix‘s immersive by beings in two places @ once (2017) compares the dilemma of existing across both virtual and physical realms through synthesised soundscapes and electronic devices. Here, there is a pleasing relationship between the convergence of twisted cables to a central powerpoint and Coventry’s circular layout.

Returning to basics, Hipkiss and Graney install a wooden shelter outside as part of their ongoing Dead Shrines Project. Activated every Tuesday by the serving of food and drink, this space addresses the collective mindset that communities may need to adopt in a dystopian future when science has perhaps failed humankind. 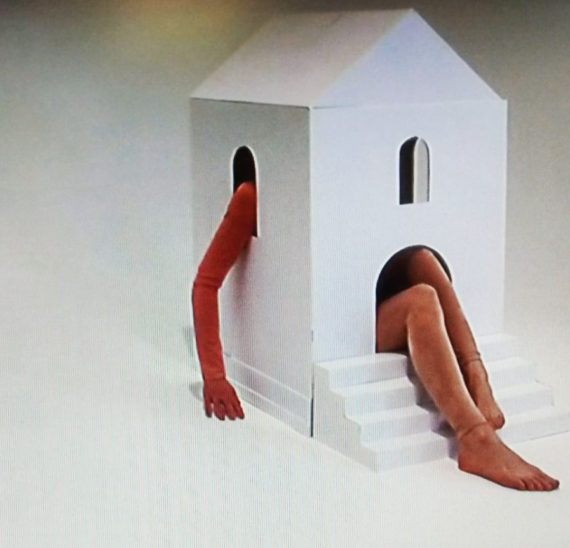 Beyond the walls of The CET, a further 11 venues are hosting Biennial exhibitions. Andy Holden‘s hour-long ‘cartoon lecture’ at FarGo Village‘s The Box provides an essential guide to contemporary living through an in-depth analysis of passé animations – notably Betty Boop, Bugs Bunny and Road Runner. Led by his own modern-day avatar, Laws of Motion in a Cartoon Landscape introduces the viewer to the rules followed by ‘golden age’ cartoons such as ‘all principles of gravity are negated by fear’ and ‘any body suspended in space will remain in space until made aware of its situation.’

Holden intertwines these scenarios with philosophical and scientific references, as well as Family Guy and The Simpsons, in order to construct some sort of reasoning for Trump’s presidency, the U.S. housing bubble and the 2008 financial crisis. He also puts forward a case for ‘zig-zags’ breaking the cyclical nature of post-modernism.

The notion of contemporary living continues in Li Hui‘s exquisite imagery about intimacy in the age of social media. While sharing a subject matter with Mira Calix’s work, Li’s Secret Valentine differs greatly, possessing the rare ability to make the topic poetic. Here, she uses photography to capture intimate connections in an age of online connectivity. Light, ethereal and anonymous, the project expresses an aspect of touch and sensitivity through singular images. It’s a slowed-down, near-nostalgic pace of life – one that resonates throughout the Biennial.

It is this strange and nostalgic connectivity that informs ‘The Future’. Instead of a distant and speculative future, Hughes proposes a depiction inspired by the successes, mishaps, ideas and conversations of the past and present. Rather than a fanciful manifesto for an unspecified time, the Biennial provides a platform for the imminent future, with artists and practitioners creating a rough blueprint of realistic and imaginary visions.

While it is a striking and much-needed platform for Midlands artists, due to its minimal international range – most of the artists are UK-based – Coventry Biennial risks remaining a regional event. Yet for a first edition it covers a healthy breadth of current concerns, with the CET Building’s transitional condition effectively used as a springboard for new responses. 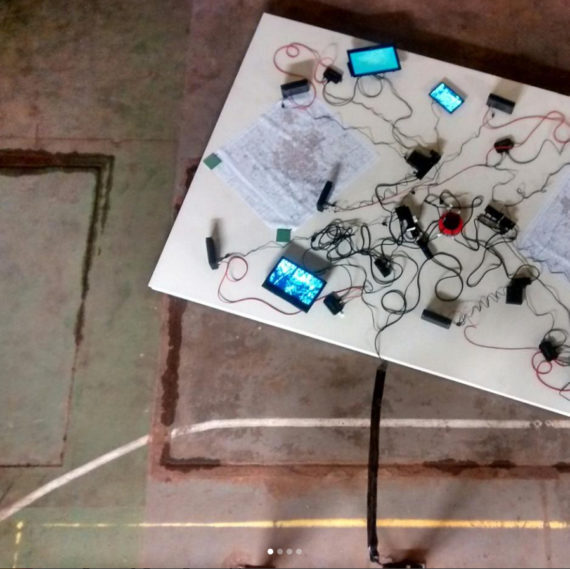 Selina Oakes is an artist and writer based in Stoke-on-Trent. Twitter: @fallfo