Crowdfunding the arts: why it's about much more than money - a-n The Artists Information Company 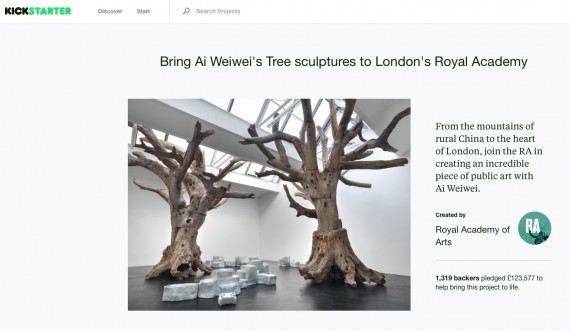 There was a fanfare of excitement when it was announced recently that the Royal Academy had exceeded its crowdfunding target by £23,577 – Ai Weiwei’s Tree sculptures would now be coming to London as part of a forthcoming major retrospective of his work.

Thanks to 1319 backers on Kickstarter – and a brilliant and inspiring video presented by Stephen Fry – the RA had raised £123,577. Well done RA, and well done to all those who contributed towards more people seeing sculptures by, in Fry’s words, ‘one of the world’s most famous artists’, someone who reminds us of the role artists have as ‘social critics… with the right to be different and the right to not conform’.

This right to not follow social norms, to find a different way, is at the heart of the crowdfunding phenomenon. A counter-cultural movement that challenged the monolithic art institutions and establishment, crowdfunding first began to emerge in the UK back in 2011 with sites such as WeDidThis (of which I’m the co-founder) and WeFund bursting onto the scene.

These grass roots sites, set up in people’s bedrooms, were soon followed by the arrival of Kickstarter and Indiegogo which had already made their debut in the US.

Crowdfunding was envisaged as a way for unknown artists and creatives to realise their own visions and ideas with the help and momentum of a supportive crowd. No longer did these individuals and emerging entrepreneurs have to align themselves with the establishment to get noticed – they were able to take risks, reach out to less traditional audiences, be different and ask questions that didn’t necessarily conform to the way things were usually done.

Crowdfunding in the UK was also, in part, a reaction to funding cuts. The government was slashing budgets and limiting opportunities for artists to source small grants to develop and make work.

At this time the funding landscape was bleak and an already over populated environment became untenable for most small, or even medium-sized organisations and collectives to get heard. This naturally resulted in a survival of the fittest mentality and even the more established institutions had to seek new methods to survive their precarious future.

It was these larger institutions which at this point were most sceptical of crowdfunding. Arguably they had the most to lose – the process felt exposing and organisations were afraid to be seen to fail if they didn’t reach their targets. They had become reliant on funding from the arts councils and other trusts and foundations.

It is, then, exciting to see that at last the big institutions are coming round to this new way of doing things. Not only are they embracing crowdfunding but they are proving that it can be wildly successful. This is incredibly gratifying to see.

Yet crowdfunding was never intended solely as a funding solution.It was a new method or process for making work, a more sustainable model for artistic enterprises.

Crowdfunding is predominantly about the ‘crowd’ – it is about reaching new audiences, building relationships and opening up the creative process to allow people to have a part in it beyond the final exhibition or performance. It allows artists to be transparent and funders to participate in both the creation of work and the democratisation of what work gets made and seen.

Crowdfunding is at the core of every project I make as a filmmaker. It enables me to maintain creative autonomy and provides a structure to progress an idea from start to fruition. There is nothing more motivating than knowing you have a network of support in the form of individuals who are inspired and excited by the work you are proposing to create.

Being an artist can be isolating. There are long periods of time while you work alone to get a project off the ground – research and development can in some cases take years. The difference between crowdfunding and more traditional methods is that when you crowdfund you can’t go back and ask for more. Yet the most valuable thing that remains is the crowd; it’s these people that inspire you and motivate you.

There’s no doubt that Weiwei’s Tree sculptures coming to the Royal Academy is hugely exciting. Yet part of me wonders whether such a high-profile project would have been funded by someone, somewhere, whatever. Should crowdfunding campaigns instead strive to fundraise for more risky and experimental projects?

Let’s hope the values the crowdfunding movement was built upon are maintained and that large institutions look beyond the financial opportunities that crowdfunding offers. Maybe they too can use the crowdfunding model to create collaborations with their audiences and reach new, less traditional, networks.

Large institutions should see crowdfunding as an opportunity to commission art that takes real risks, asks questions and always makes space for people to be different.

Use the crowdfunding tag for more stories