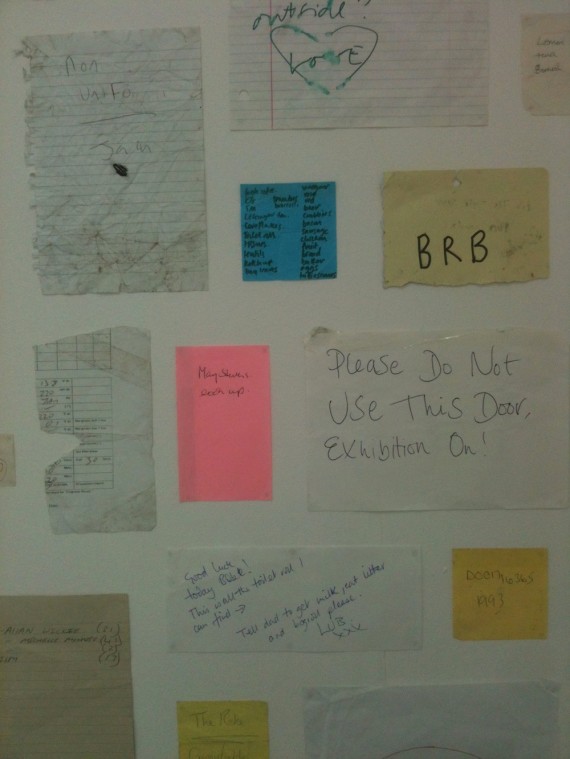 While barely referenced by the students, it’s hard not to think about last year’s fire at some point when wandering around the two floors of the Glasgow School of Art BA Fine Art degree show. It is, after all, the reason the work of 108 students is being displayed in the Tontine – a former office block in the city’s east end – rather than the Mackintosh building, currently unoccupied as post-blaze reconstruction work continues.

Of course it’s the work of the artists who have graduated from the art school over the years that has cemented GSA’s almost myth-like status, not its beautiful building. Its habit of turning out inventive and influential artists, and its role in making ‘the Glasgow Miracle’ a reality, is the stuff of modern folklore. A story, then, that’s dominated by people, not bricks and mortar.

Myths, folklore, miracles – all of the above appear to be swirling around in the work of Fine Art Photography student Sophie Cunningham. “I am drawn to the ambiguous rituals whose origins are lost over time,” she says. “The fact that these ceremonies are still apparent in our lives today fascinates me.”

Her Glasgow Folklore installation is a compelling mix of film, photography and artificial flower sculptures, revealing well-formed ideas and playful intentions. A pink A5 booklet outlines four ‘traditions’, from the mysterious ‘Garland Day’ with its flower person roaming a Glasgow park, to the Glasgow Hobby Horse parade. There’s a film showing Cunningham and her pals enacting the parade, while another documents the ‘traditional’ act of eating chilli peppers. It’s an absurd mix of fact and fiction – witty, serious and cleverly realised.

Cunningham’s presentation is a convincing attempt at a mini solo exhibition. The format of the GSA degree show lends itself to this individual approach, its many white dividing walls creating a warren of booths, most of which are dedicated to just one artist.

Like Cunningham, fellow Fine Art Photography student Lucie Lienard presents a busy, multi-faceted booth that shows a welcome maturity of practice. There are two small video monitors, one screening original footage from the 1928 film The Passion of Joan of Arc. A colour photograph of a foot wound hangs above a row of agave leaves; there’s an installation of dyed blue sea salt in a bag fixed to the wall; translations of poems by Rimbaud are dotted around the space. It’s a place for contemplating the physical and emotional.

There’s more specific things to think about in the work of Painting and Printmaking student Gary Zhexi Zhang: “I am interested in the intertwining of private and political narratives in the digital era,” he says. His two-screen film installation, Lena, slips from footage of US Air Force drones to a CGI simulation of the Air Asia Flight 8501 crash to photographs of the Lena of the title – a female model whose 1970s Playboy image is often used to test algorithms in digital image processing.

Using found footage from the web, Zhexi Zhang has created a captivating film that delves into a very 21st century question of surveillance, exploring the emotional alienation inherent in a society where more and more seeing and doing is filtered through the eyes and minds of machines.

In a very different way, the digital world also forms the basis of Painting and Printmaking student Kerry McManus’s work. “As a culture we are obsessed with online communication and representation… and I love it,” she says. Casts of her old iPhone are scattered around the space and a defunct, gold painted laptop sits atop a plinth. On the wall, 20 pillows have text messages printed on them, sent by McManus’s friends in response to a question about the last time they had sex. It’s the social side of digital that’s being looked at here, and this is a celebration rather than critique – and maybe that tells its own story.

The work of Calum Jervis, Fine Art Photography, is more Post-it note than smartphone. One wall of his booth consists of an arrangement of hundreds of found, hand-written messages and signs that include the cryptic (‘Help yourself’), the bizarre (a recipe consisting of eggs, sugar, margarine, jam and food colouring) and the self-explanotory (‘Got a parcel for you. 2/1’).

Like a series of loose ends or a catalogue of banal mysteries, Jervis’s notes tell us both very little and quite a lot – glimpses of not particularly important things that in their everyday ordinariness reveal a written conversation that isn’t associated with friends, followers and social media’s call to ‘look at me’.

While inevitably there are a few misses in this sprawling showcase, there are enough hits to warrant a couple of hours of close scrutiny. Enough, in fact, to ensure that you leave the Tontine thinking about new art and where it will go next, rather than Charles Rennie Mackintosh and what might have been.

For more on degree shows across the UK, read the a-n Degree Shows Guide 2015. Featuring interviews, previews and listings, you can view it as an ebook or download the pdf