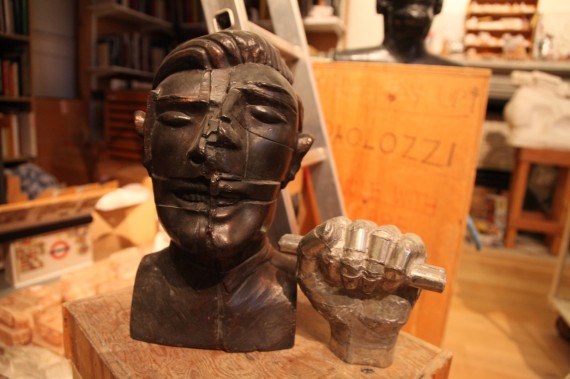 “We want to see if we can tell the story of art history through more innovative, less didactic ways, rather than just saying: here’s an object, this is what it’s about.”

Hijack’s Gilly Booth is describing the Digital R&D Fund for the Arts project she’s working on with technology partner Touchpress, communications company Dacapo, and art historian Chris Horrocks and geographer Mike Smith of Kingston University. By July 2015, the aim is to have delivered an app, Studio of Objects, based around the Scottish National Gallery of Modern Art’s preserved studio of Scottish sculptor Eduardo Paolozzi (1924-2005).

If, however, the very mention of the ‘A’ word induces an instant state of torpor, fear not – there is rather more ambition involved in this project than the ‘click on this image and watch it spin round’ approach of many arts apps.

“We’re looking at this from a fine art, installation point of view,” says Booth, who studied at the Royal College of Art and works in film as both an artist and documentary maker. “We’ll be looking at what we get [from scanning the objects in the studio] and respond each time to the physicality of the object.

“That’s what’s great about this R&D grant – we haven’t got a client saying we want you to do this in a year and this is what we’re after. We’ve been given the money to really try and push it from a creative point of view, but also pushing the technological barriers at the same time. That’s what we’re really excited about.”

The technologically challenging aspect of the project involves teaming up a high-end forensic laser scanner with a fairly ordinary digital film camera – usually used by Hijack for its documentary film making – to capture some 8000 objects at Paolozzi’s studio in Edinburgh. “We’re combining the camera with the scanner so that we can integrate the laser data with the photography,” says Booth.

Once this has been achieved and the super high-quality, 360-degree imagery has been compressed and made navigable on an iPad by app developers Touchpress, a series of workshops with young people at Pallant House Gallery in Chichester will help determine what direction they go in next.

“The young people will be co-creators in a way,” says Horrocks, who is leading the research aspect of the project. “We don’t want it to end up like a rather poor version of an interactive game – it’s that pedagogical, learning thing versus the entertainment thing that is at the centre of all this.”

Widening the co-creation net further, William Stern and Ceri Passmore at Dacapo will be using social media to involve as broad an audience as possible in the project, as well as providing an online narrative to its challenges and breakthroughs.

The next stage of the app building process will involve incorporating a treasure trove of Paolozzi archive footage that the project has been given full access to by the Paolozzi Foundation. (Separate to the R&D Fund project, Hijack is currently working on a film about the artist.) Such a wealth of material underlines that at the heart of the project is a real passion and respect for Paolozzi’s work – as well as a recognition of the wider cultural impact this larger-than-life figure had on post-war British art.

“I actually knew Paolozzi and was intrigued by the way he worked,” says Booth. “He was a sculptor, public artist, a printmaker; he hung out with JG Ballard and was into publishing, too. He was the sort of artist who would have been very interested in current trends and developments in media and technology and how we interact and deal with objects. I think his work is perfect for this project.”

While the R&D nature of the whole enterprise means that, at this stage, the exact shape of the finished app is still a long way from being decided, Booth is firmly focused on delivering something tangible, interesting and useful. “We’re not used to failing at Hijack, we always deliver,” she says. “It’s the same with all the partners. We will produce a product – I’m just not sure at this stage what that will be.”

Crucially, though, an iPad app is only one aspect of what Booth, Horrocks and the rest of the team hope to achieve. Having perfected the technology for scanning the objects and crunching the huge image files into a manageable size, the hope is that they can create a transferable, cost-efficient digital tool for museums, galleries and any other organisations with an archive to preserve.

“We’re trying to build a business model for archives and museums and the way we use this forensic, 360-degree scanning,” says Booth. “If it works it could be really economically viable. What people then do with the content after that is up to them.”

There are also, thinks Horrocks, plenty of other places similar to Paolozzi’s studio that lend themselves to this kind of digital archiving. “Part of our research is to work out whether the same approach can it be applied to other spaces that are inaccessible, such as Francis Bacon’s studio for example, or Dylan Thomas’s writing hut.”

That, though, is all much further down the line, once technological hurdles have been overcome and an anything-but-ordinary app has been created for the National Galleries of Scotland. “We want the app to provide a more haptic, tactile relationship with the work,” says Horrocks. “A form of interaction that brings about curiosity and surprise – a lot of art history doesn’t do that.”

More information on Studio of Objects at
artsdigitalrnd.org.uk/projects/hijack