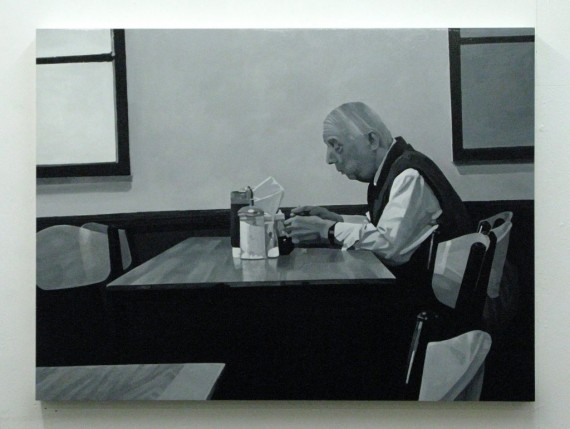 Newham-based painter Nathan Eastwood has been awarded the inaugural East London Painting Prize for his work Nico’s Café. He receives a £10,000 prize plus a solo show at the Nunnery Gallery in east London later this year.

Eastwood’s paintings describe small moments in everyday life in meticulous detail, from cleaning the bathroom to mulling thoughts over a cup of tea. Speaking about the winning work, Rosamond Murdoch, director of the Nunnery Gallery, said: “Nico’s Café is a eulogy to old east London without being stuck in the past – it is a painting that still speaks of today.”

The East London Painting Prize was created by The Legacy List, the charity of the Queen Elizabeth Olympic Park, with the Goldhill Family, Zabludowicz Collection, and in association with Bow Arts. It honours the life and work of east London property developer, arts philanthropist and amateur painter Jack Goldhill, and aims to support both established and emerging artists in the area.

Congratulating the artist on winning the award, Maheshwari said: “Nathan’s painting was a thoughtful and exciting submission and his practice suggests a very distinctive style and approach to the medium. Winning the first East London Painting Prize will facilitate his ambitious plans for the future.”

Nathan Eastwood’s solo show as winner of the East London Painting Prize will take place at the Nunnery Gallery in October 2014.