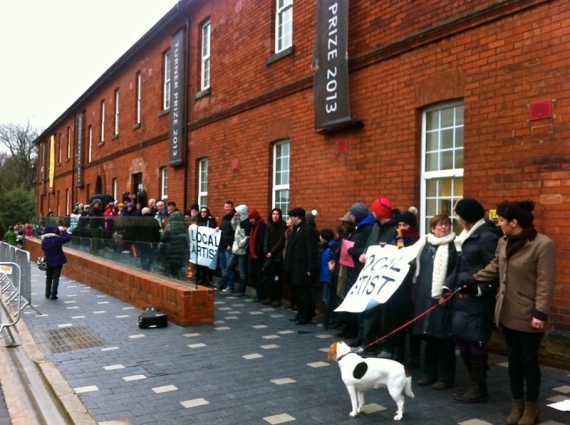 Derry-Londonderry’s visual arts community game out in force yesterday, Sunday 5 January, to demonstrate against plans to demolish the gallery space at Ebrington Barracks, which has just hosted the Turner Prize exhibition.

Over 400 people protested against the plans, which will see the galleries being turned into office space for digital companies. Protestors formed a human chain around the building on the last day of the Turner Prize show, showing their support for the Keep Ebrington Alive campaign, instigated by the city’s artist-led Void gallery.

Maoliosa Boyle, Manager of Void, said: “It would be an absolutely huge mistake and step backwards for the city if the venue’s use was changed. The Ebrington space has been transformed over the last year from a contested area that was completely hidden from the city to a space that has nurtured and housed the very best of cultural events in 2013.

“The people of Derry need time to consider what the possibilities of the space now hold and the potential it has for Derry to become the centre of contemporary art excellence. It is a ridiculous idea that within weeks of the Turner Prize ending that the interior of the gallery space will be removed and converted into offices with no potential tenant in mind.”

The former British Army barracks were renovated and converted into gallery space for the Turner Prize show at a cost of £2.5 million. The loss of the gallery spaces and conversion of the barracks solely into offices will involve further cost.

Derry-based filmmaker Jonathan Cummins said: “The building has proven itself as a viable contemporary art space and it should remain so. On average, 1,200 people visited the gallery on a daily basis. We have to look at what a successful civic and cultural space it has been for all. Why can’t it be sustainable?”

The campaign is demanding that before building work begins to convert the gallery spaces, there should be a full consultation with the local community on the future use of the building.

Campaign spokesperson Eamonn McCann said: “The space has been transformed, at considerable public expense, into as well-appointed a gallery as there is in these islands. Transforming it into offices would be an act of philistinism casting a backward shadow on the brightness of the last 12 months. Derry artists shouldn’t allow it to happen.”

The conversion of the Ebrington Barracks building into office space is being carried out by Ilex. The urban regeneration company is overseeing work on the 26-acre former military site and was responsible for building the city’s symbolic Peace Bridge across the River Foyle.

A spokeswoman for Ilex said: “The intention is and always was to make it a creative hub, not a gallery. This was approved even before Derry won the City of Culture title.”