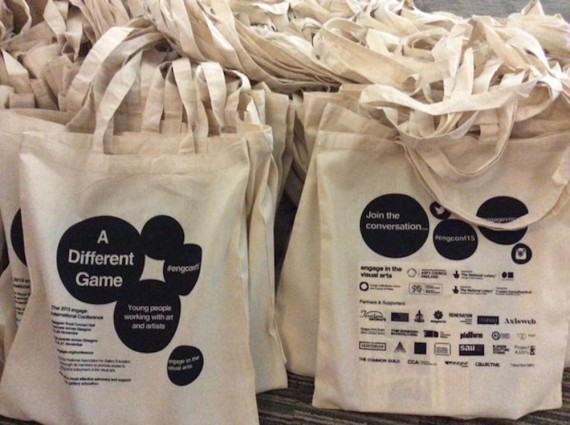 Iseult Timmermans is explaining the image on a ’zine she has helped create with colleagues. The front cover is a cheerful collage of red and yellow flames. She tells a small group of fellow gallery educators, gathered at Street Level gallery for a breakout session at the 2015 engage International Conference in Glasgow, that the image comes from something that the artist Tim Rollins once said in a workshop she attended.

He was describing a bunch of exhausted teachers, she explains. They were burnt out. Here Timmermans mimics Rollins, himself mimicking the teachers’ extended and enervated posture. “‘Burnt out?’ he said to them. ‘Were you ever on fire?’” Timmermans laughs. “Now that’s what I always ask myself before I start a session.”

Across the city of Glasgow, from a walk through a muddy playground in the East End to the more conventional surroundings of the conference venue of the Royal Concert Hall, 218 artists and educators were defying damp weather to ask themselves the same question: were they still on fire?

In workshop sessions they sent provocative postcards to anonymous recipients, wrote lists, danced, made small balancing sculptures and, above all, talked. They shared the way they challenged themselves, challenged others or simply described the challenges they faced.

Artist Annette Krauss showed a picture of her emptying a bucket of dirty water, explaining that she and gallery colleagues attempted to dissolve the expected hierarchies of their workplace behaviour and spent half an hour each week doing the cleaning together.

Dr Julie Crawshaw, from the University of Gothenburg, “a planner-anthropologist learning with and not just about art,” described an experimental arts evaluation she developed for Collective’s All-sided Games project in Edinburgh. Beginning as a participant observer, she ended up taking part in a running race.

In a soapbox session, artist Alice McCabe described her thesis in which gallery education proceeded through misunderstanding. The thesis took the form of the script of an absurd and comic soap opera, in which every episode included the accidental death of a member of the gallery education team.

At a conference dedicated to working with young people, delegates were urged to remember what had motivated them in the arts in the first place. Mark Miller, convenor of young people’s programmes at Tate, recalled: “Punk, Malcolm X, the underground.”

The conference, programmed by Annabel Johnson and Alicia Miller, was tasked with three central topics: Is the gallery a school? The importance of cross-disciplinary engagement, and the ethics of peer-led practice. But delegates repeatedly turned, instead, to more fundamental questions of the limitations of the definitions, designations and representations they worked with.

Anyone seen an adult?

“I honestly believe that adults don’t exist!” declared Darren O’Donnell, director of Mammalian Diving Reflex, in a keynote provocation that suggested to the audience that adulthood wasn’t a useful starting point for consideration of the issues. “I can’t think of a single quality that applies to adults and not to children.”

He railed against traditional emphasis on health and safety and child protection, describing them as methods of control. Instead, he explained that he had developed a set of protocols for young people, including that of succession. “We collaborate with young people on the assumption that they will take control.”

O’Donnell is an artist and cultural planner whose key performance works, Nightwalks with Teenagers and Haircuts by Children, operate by reversing or rearranging traditional hierarchies and by visualising the ethics of trust. His principle that when working with young people “we never ever, ever, ever shush them,” brought gasps of amusement from many delegates – particularly those who also happened to be parents.

Away from the public floor, many delegates questioned the fact that while young people formed the theoretical heart of the conference they were notable in their lack of voice in its official structures. An exception was the opening presentation at the conference by educators Teresa Cisneros and Barby Asante, whose Agency for Agency has moved out of the gallery altogether to sustain long-term relationships with a collective of young artists.

The presentation was devised with emerging artists Laurel Hadleigh and Anni Movsisyan. Cisneros later emphasised the limitations of labels when working with young people. “I try not to assume. Though I hear words like ‘hard to reach’ or ‘working class’ – which is code for poor.”

Again and again delegates and speakers emphasised the importance of listening. Artist Brian Lobel, who by introducing questions of sex and sexuality into his performance work around health has actively changed academic research into the impact of cancer on young people, said: “What kind of personal growth can come if one just talks about oneself? I wanted to shut up and listen.”

Jessica Gogan, director of the Instituto MESA in Rio, described the impact when an artist brought her young baby to work: “We got quieter and slowed down.”

The plenary sessions were packed with presentations but delegates had little time to actively develop the discussion. Is the gallery a school? The answer was pretty much a universal ‘no’.

Hadrian Gerrard, director of Create London, emphasised the lack of economic diversity in the art world of East London where artists were the privileged beneficiaries of extensive financial support from their families. A plenary devoted to inter-disciplinary work described fantastic projects but barely scratched the surface of their efficacy, despite a lively contribution from artist Ross Sinclair describing a project in which he gave “free electric guitars to teenagers”.

But at the heart of the conference was a real set of challenges to gallery educators around the question of peer-led learning. An understated bombshell of a presentation by Dr Esther Sayers, lecturer at Goldsmiths College and Kings College London, looked at the pros and cons of peer-led pedagogy and challenged commonplace perceptions of the value and efficiency of peer-led learning as a means of nurturing diversity.

Sayers urged a deeper discussion of pedagogic strategies for working with marginalised young people. She particularly drew on her current experience of working in an education setting with students from Islamic backgrounds. Her research had emphasised that the social nature of peer-led strategies could work by reinforcing social boundaries, “creating networks of people who look like each other and who usually look like me.”

A former curator for young people’s programmes at Tate Modern, Sayers suggested that “creating equitable relations is difficult and we have to be honest: why do institutions want to give power? Is peer-led practice good for young people or for institutions?” Sayers believed that the flexible and responsive pedagogical methods developed by artists were one of the ways forward.

Annette Krauss urged delegates to join young people in “critiquing the house we inhabit” and described the “hidden curriculum… what we learn alongside the official curriculum, the norms and values we communicate.” She developed projects and working practices where even the comfortable chair she sat in was subject to criticism from students whose own chairs were harder.

Many delegates took the opportunity to take part in an extensive fringe programme, made gallery visits or held meetings while they were in Glasgow. Simon Wright, curator of public programmes at MK Gallery in Milton Keynes, visited the Turner Prize exhibition at Tramway.

“I think Assemble are an incredibly exciting group of thinkers,” said Wright, discussing the work of the art and architecture collective who were nominated for their work with the community in Granby, Liverpool. “Watching the interpretation videos I was struck by what they say around their unease being nominated for the prize. I think it could be a shakeup for the prize, moving away from the system of star artists.”

Wright was one of a group who visited the Baltic Street Adventure Playground in Glasgow’s Dalmarnock, a long-neglected former industrial area now dominated by the new infrastructure of the 2014 Commonwealth Games. At Baltic Street, Create London commissioned Assemble to design a playground as part Glasgow’s Velocity project; it is now run by a community interest company.

Wright’s own organisation is embarking on a large public realm project, part of which will be an artist-designed public playground. “I was surprised,” he says of his visit. “Perhaps I thought it would be more ‘designed’-looking, but the really exciting thing was the community. Play leader Robert Kennedy made it come alive, and the real meaning of the playground is the relationship with the community.”

Finally, like any well-schooled gallery educator, the conference considered the question of evaluation. Roz Hall, researcher and “critical friend” of Tate’s nationwide Circuit project, urged new forms of evaluation that were embedded in engagement programmes and developed continuously as the result of dialogue and relationships with participants. Evaluation, she contended, was often another method of control – even the buzzword ‘impact’ spoke of doing to, rather than doing with, participants.

Victoria Hollows from Glasgow Museums described the social accounting process used to evaluate the nationwide Generation project in 2014. Julie Crawshaw made a plea both for art works and evaluation processes that could be considered as “deliberative”. And with that, the official deliberations were over.