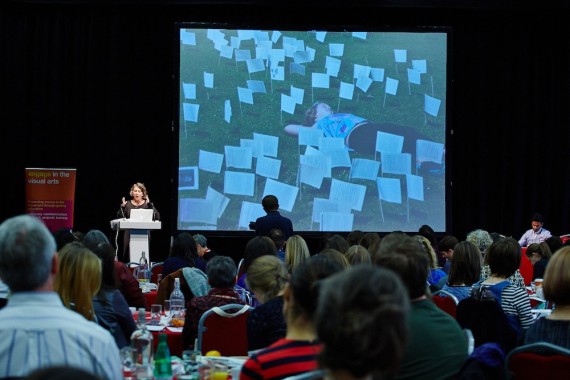 In the quarter century since Tim Berners-Lee declared the World Wide Web open for business, its encroachment on our everyday lives has brought about much in the way of inventive thought, which has variously impacted on the way we do things.

What its onset has also introduced is a chase for new kinds of innovation, and the arts sector – slightly belatedly – has flung itself headlong into this. Sharing the year of its birth with that of Berners-Lee’s idea, engage, an organisation that represents ‘gallery, art and education professionals’, marked its 25th anniversary with a two-day conference titled ‘Disruptive Influences?’. One of its focuses, appropriately, was around ideas of digital innovation.

Examining ‘where gallery education practice has been innovative… and how it can continue to innovate’, conference programmer Michael Prior cautioned: “Innovation is uncomfortable … just when you think you’ve got it sorted, a new idea comes along and disrupts everything.”

The opening panel on day one was on the subject of ‘Innovation & Collaboration: The value of working together to imagine new ways of enabling innovation’, its chair, Claire Antrobus, stressing that “collaboration is critical for adapting and innovating”. A trio of speakers followed, offering a variety of different perspectives on why collaboration has become increasingly crucial to breeding success, whatever the field.

Jo Verrent (Unlimited), a diversity trainer and consultant, is interested in reframing disability; for her, people on “the margins” have necessarily incorporated innovation into their daily routine. Activist and campaigner Tamsin Omond (The Future) argued that we need to guard against using the term collaboration as a catchall. “Collaboration,” said Omond, “[is] more than just a collection of mutually beneficial relationships.” It is a purer form of co-creation that Omond believes is the next step in “creating exciting new alternatives”. Otherwise, she warned, the current “planet-wrecking” system in which we live will go unchecked.

Similar concerns were central to the day’s third speaker, Rohan Gunatillake, co-producer of Sync. The key question raised by Gunatillake was that while lots of processes get labelled collaborative, often they are anything but. “Speak to any arts organisation, they’ll say: ‘collaboration is a key part of our DNA’.” But, he asserted, what we are seeing instead is the art world’s success at commissioning talent, where the relationship is one of service and payment.

“I don’t collaborate with my plumber,” said Gunatillake by way of metaphor. He argued that for the relationship to become a truly collaborative one, arts organisations need to conquer their fears: of the unknown and of digital, so that collaboration breeds resilience, long-term relationships and therefore results, rather than the current model of one-off, short-term gains.

Each speaker made compelling arguments, pitches almost, but the problem comes in the conquering of fears, risk and doing things differently. It’s not only budgets that Government cuts are eating into, it follows that the bravery required to take risks might also be significantly diminished.

Following a break it was time for the panel on ‘Innovation & digital: ways in which social media, mobile and digital technologies continue to influence our experiences, and why arts organisations need to be part of this change’, introduced by Dr Rebecca Sinker (curator of digital learning at Tate). Sinker noted two key and worrying proclivities to which the arts are prone in relation to digital innovation: “a tendency… to suffer performance anxiety” and the mistaken belief that “digital activity becomes a symbol for innovation.” The latter being a nice way of saying a downloadable PDF does not an interactive digital resource make.

Sarah Ellis, digital producer for the RSC, seemed to have things the right way around: “It’s not about digital … it’s about new rituals in culture,” she said. Indeed, we’ve always had to innovate – digital is just the latest platform on which to do it. FACT‘s Sarah Bailey (acting head of engagement) and Louise Latter (young people and learning manager) talked about their digital work in collaboration with communities to produce In Hand, an app that supports young people’s mental wellbeing. Confessing that this is new ground and that “nobody has the answers”, it is encouraging to see an organisation successfully embracing those risks mentioned earlier.

Matt Locke, who has worked with the BBC and Channel 4 and is now director of Storythings, “a studio that develops new ways to tell stories”, offered encouragement, too. How we tell stories, said Locke, has “been a fairly stable, static culture for 50 years”. He continued: “We are in an age of so-called disruption … [but] digital habitats are becoming more settled.” This stability is enabling us to track data and understand how people are using and engaging with new platforms, perhaps allowing us to better plot our innovations which were previously just stabs in the dark.

Finally we heard from Alex Fleetwood, former creative director and founder of gaming company Hide&Seek. Fleetwood talked about Tate Trumps (think Top Trumps for art), which he said “gives people a reason to look selectively at artworks in a gallery”. While he insisted that this shouldn’t lessen the impact of artworks, it does seem hard to quantify what positive changes would derive from such use of gaming in the art world.

If there was a thread running through the day it was just such questions, and certainly there still seem to be more questions than answers. Despite Locke’s comforting assertion that the dust is beginning to settle, it’s difficult to stray too far from the thought that we are still at a point of iterative development as far as digital is concerned, and therefore the potential for innovation is also still prone to trial and error. To resort to cliché, it seems that in the arts we’re still on the frontier of these new platforms: still prospecting in the new Wild West.

Gallery education, innovation and the importance of being disruptive – Stephen Palmer talks to engage conference programmer Michael Prior about the approach of the 2014 event