Estuary 2016 festival: transition, decay and the sonics of the sea - a-n The Artists Information Company 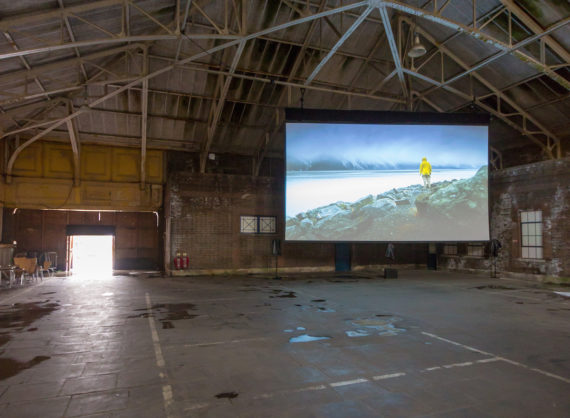 Set across seven locations on the shores of Essex and Kent, Estuary is a new music, literature, and visual art biennial based in, and inspired by, the Thames Estuary. Run by arts organisation Metal, the 16-day festival aims to explore and celebrate the shorelines of Britain. Despite their natural beauty, historical significance, and economic importance, these landscapes tend to be overlooked by artists and curators in favour of metropolitan centres such as London.

The artists range from established names such as John Akomfrah and Jeremy Deller to younger and lesser-known practitioners including photographer and filmmaker Chloe Dewe Mathews, artist duo Web-Ellis, and video artist Taylor Smith. Though formally varied, the work is thematically united around ideas of transition that chime with the estuary landscape: departure, arrival, erosion, and migration. A number of the works (a mixture of existing works and newly commissioned pieces) engage directly with the history and geography of the Thames. 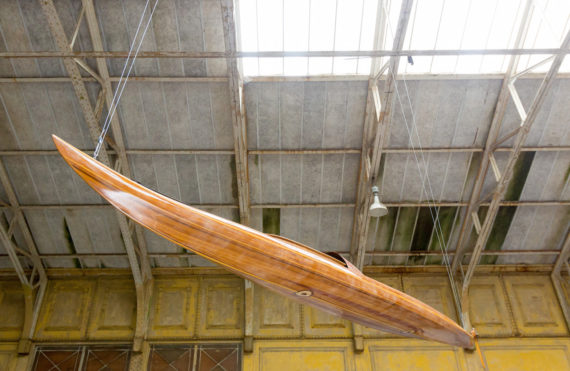 The majority of works featured in ‘Points of Departure’ are displayed at the Cruise Terminal in Tilbury. Despite its dilapidated appearance and abandoned-seeming air – qualities which greatly enhance the slightly haunted atmosphere of the exhibition as a whole – this vast, Grade II-listed brick structure continues to be used by cruise ships and commercial import and export companies.

John Akomfrah’s video installation Mnemosyne is among the largest and most impressive works on show. The installation occupies a former railway station used for transporting cargo to London: one of several large, interconnected buildings that comprise the sprawling terminal. Blending archive recordings of West Indian migration to the UK, footage of a dreadlocked man wandering through post-industrial landscapes, and a brooding soundtrack rich in music and voices in 7.1 surround sound, the sheer scale of this cinematic montage (the video is projected on a cinema-sized screen) is matched by its ambition to capture the hope and melancholy of migration. 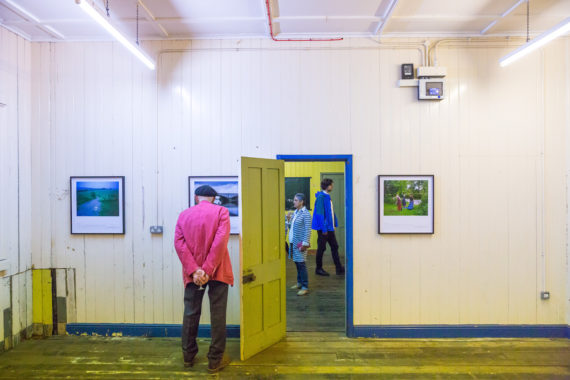 A colourful banner by Jeremy Deller – one of his Five Memorials series – echoes Akomfrah’s interest in West Indian migration. Displayed in the arrivals lounge of the cruise terminal, this gold, green, and red hand-embroidered banner commemorates the arrival of the MV Empire Windrush, which docked at Tilbury in 1948 and marked the start of post-war immigration to Britain. Alongside an elegant wooden canoe by Adam Chodzko (Ghost), and an engraved brass bell by Angus Carlyle (A Crossing Bell), Deller’s is one of the few sculptural works in ‘Points of Departure’, which predominantly focuses on video art.

This emphasis is appropriate to the larger aspirations of the festival. As a durational medium, video provides opportunities for artists to capture the passage of time on the estuary, in terms of both lived experience and the relationship of past and present, as well as to explore its visual and sonic qualities. Chloe Dewe Mathews’s Offshore Broadcast, for example, juxtaposes archive recordings of a pirate radio station with beautifully shot contemporary footage of the offshore location the station used to broadcast from. 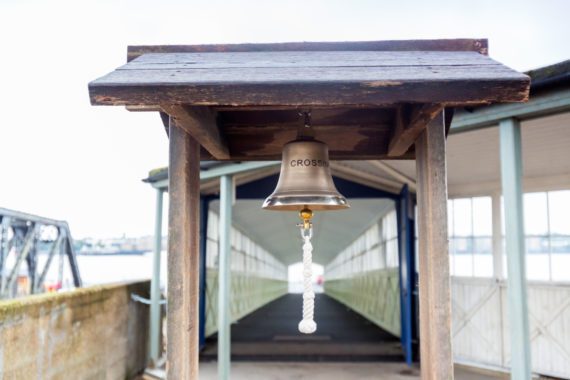 Works by Jem Finer, Bronwen Buckeridge, and Louisa Fairclough also draw inspiration from the musical side of the estuary. These sound-led pieces incorporate numerous field recordings to evoke the ‘found’ music of the estuary environment, thick with clinking, clanking, and sloshing noises.

The small, darkened rooms these works are shown in – former offices for staff at the Port of London Authority – create an unusual and arresting setting for contemplation of the estuary environment. Appropriately enough, this feeling is most acute at the moment of departure from the gallery spaces: leaving the dark rooms and emerging to see the bright, vast sky of the estuary makes for a stunning transition. 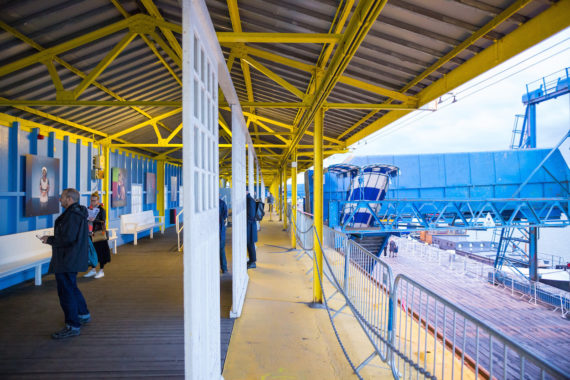 Themes of transition and decay were also explored in the exhibition through language. One of Britain’s leading poets, Lavinia Greenlaw, debuts her first film work, called The Sea is an Edge and an Ending, at the biennial. This exquisitely scripted film, which comprises footage of a young woman and her elderly father voiced over by a linked series of prose poems, draws comparisons to the erosion of the east Anglian shoreline with the erosion from Alzheimer’s of the mind of the poet’s father.

By situating contemporary art in this liminal, littoral territory, Estuary enhances our awareness of both the works on display, and the landscapes that inspired them.

‘Points of Departure’ at Estuary 2016 continues until 30 September. www.estuaryfestival.com

Patrick Langley is a writer and critic based in London. He is a contributing editor at The White Review