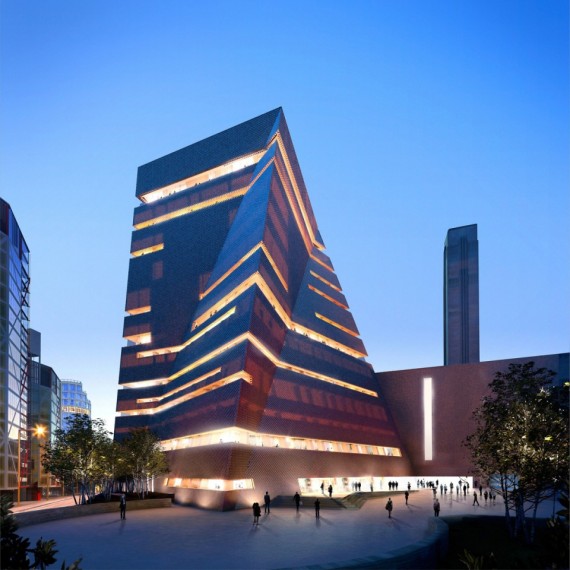 Tate Modern has set a date for the opening of its new gallery space. Originally set to coincide with the 2012 Olympics, the delayed building will feature a 10-storey extension, adding over 60% more gallery space – 20,700 square metres –  to the site.

The extension will open on 17 June 2016, with 5000 schoolchildren attending a special preview the day before.

Announcing the opening this week, Sir Nicolas Serota, director of Tate, said: “When Tate Modern opened in 2000, it transformed Britain’s relationship with modern and contemporary art. Now a second transformation is underway.

The new Tate Modern will challenge the traditional story of modern art and offer a fresh perspective on artists working around the world in a re-hang of the whole building. It will also be a communal place where people can meet to share, debate and create.”

Like the original Tate Modern, the new building has been designed by architects Herzog & de Meuron and will present a combination of raw industrial spaces and 21st century architecture.

The extension will include the Tanks – the world’s first gallery dedicated to live and performance art. Above them will be the new gallery spaces and on level 10 there will be a public terrace offering 360-degree views of the city.

Back in 2006, when the project was first announced, it was estimated costs would be around £215m at 2012 prices. At this point, Tate still needs to raise an additional £30m to complete the works.

Nevertheless, Serota is confident this will be achieved. He told BBC News: “Both I and the trustees are absolutely confident that we will raise those funds. We’ve got a pretty good record of completing the fundraising for projects that we set out on.”