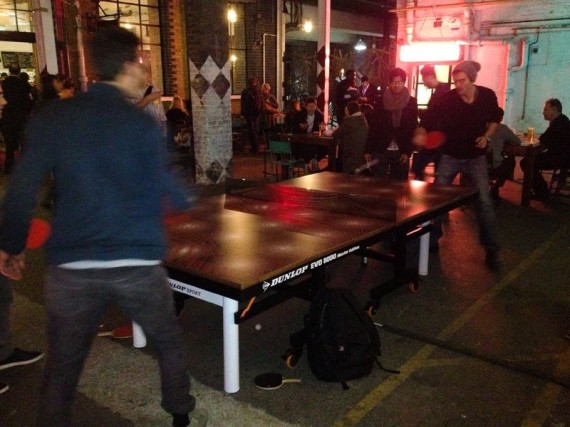 This weekend will see FACT (Foundation for Art and Creative Technology) celebrate 10 years since the opening of its award-winning building on Liverpool’s Wood Street with a day of innovative party games and interactive installations.

The pioneering media arts hub will be putting a technological spin on traditional games such as pass the parcel or pin the tail on the donkey, with ideas developed by FACT’s young people’s group Freehand.

Elsewhere, artist Will Nash will be bringing back his crowd pleasing Noisy Table, an interactive ping-pong table that aims to break down the barriers of traditional art: “People can feel intimidated when an artist asks them to join in,” Nash says, “but they don’t even think about that with table tennis. They just pick up the bat and start playing.”

Other state-of-the-art party tricks include a bouncy castle that responds to people with sound and light and an interactive crazy golf course. Holy Cross Catholic Primary School’s DS Orchestra will be staging a one-off performance of new music created in collaboration with artist Ross Dalziel using a Nintendo DS and custom-written chiptune software. There will also be a last chance to see FACT’s Winter Sparks, an exhibition of large-scale light and sound installations that explore connections between art and science.

Since its inception in 1988, FACT has commissioned and presented over 250 new media and digital artworks from artists including Pipilotti Rist, Nam June Paik, Bill Viola, Apichatpong Weerasethakul and Isaac Julien. Its Wood Street building, which opened on 23 February 2003, now houses three galleries, a café, bar and four cinema screens. “Over the last ten years FACT has made an indelible mark on the cultural landscape of Liverpool and beyond,” says Director Mike Stubbs, “to become an international leader in art, research and creative technology.

“We say FACT is the place where people, art and technology meet, and our Hacky Birthday celebrations will be very much in keeping with this ethos.”