Field Broadcast: "How to communicate the incommunicable nature of a landscape" - a-n The Artists Information Company 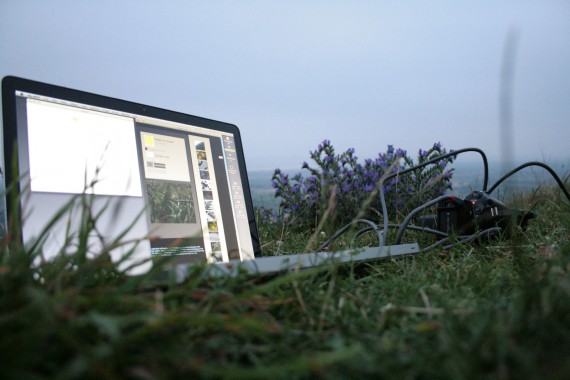 “There was a moment when our practices came together,” says Rob Smith, artist and co-director of Field Broadcast. In 2010, he and Rebecca Birch created the commissioning platform to connect artists, audiences and landscapes via live digital broadcast. For a broadcast event, they invite artists to travel to a specific location and make a work in response to their surroundings. Software written by Smith enables the work, at the very moment it is ready, to be transmitted live and unannounced to people’s computer desktops, tablets or phones.

“I relate it to a trajectory that comes out of Land Art and Land Art’s relationship to new media practices since the ’60s,” Smith explains. He cites Gerry Schum’s 1969 TV Gallery broadcast featuring works for television by Robert Smithson, Jan Dibbets and others as an example of the ways land artists have engaged with technologies and media platforms to make subjective connections with site.

Birch’s interests on the other hand lie in the idea of place, and in conveying an individual experience of place to others. “I’m interested in how one communicates the incommunicable nature of being in a landscape, being with a landscape,” she says, “and the directness of that communication.”

For their latest project, Scene on a Navigable River, Birch and Smith have invited eight artists to respond to Dedham Vale, the land around the River Stour in Suffolk best known as the setting for John Constable’s paintings The Hay Wain and Flatford Mill (Scene on a Navigable River). A rural idyll made ubiquitous through its reproduction on biscuit tins, tea towels and jigsaw puzzles, it offers an ideal backdrop for an exploration of real and imagined, natural and constructed space.

“We’re interested in the artifice of it,” says Smith, “the National Trust call it a ‘living landscape’ and there are tenant farmers there but they’re also making pruning and planting decisions in order to match the image of the paintings.”

“Which are themselves a fiction,” Birch adds. “Constable didn’t paint en plein air, we know he was painting those landscapes back in London, working from sketches and drawings, so in a sense they’re composites anyway.”

Composite is perhaps a useful term when thinking about the broadcast events, which, Birch stresses, occur on people’s screens rather than the location from which they’re transmitted. They are, then, different for each viewer, a unique layering of the live video image with the other frames, text and graphics that happen to be on their desktop at the time.

Importantly, the Field Broadcast window appears outside of a web browser – a discrete portal leading only to the artwork, for the duration of the work only, with no forward, back or refresh buttons to control engagement with the content. This marks it out from other live broadcast projects – such as Tate’s Performance Room – and means, of course, that there’s every chance viewers will miss some or even all of the works if they’re not at their computer when they take place.

For Smith and Birch, this is perfect. “There’s a slight nostalgia for analogue television and early broadcast,” says Birch, “it’s something about the purity of the contact – you can’t click away, or go back to it another time. If you don’t stop what you’re doing and watch it, you won’t see it.”

“I really like that live broadcast now has the potentialto be experienced as a performative and ritualised social encounter,” says Adam Chodzko one of the commissioned artists. “Pre-BBC iPlayer, etc. we watched a TV programme at the same time as everyone else. Now we ‘watch again’ and ‘listen again’ with total freedom, but we have lost the particular social space of one-off live transmission.”

Working with actress Gretchen Egolf, Chodzko’s project explores the sense of instability that this liveness engenders, while considering what might be expected of a landscape so historically and culturally loaded as the Vale, humorously confusing Constable’s hay wain with another painted by Heironymous Bosch three hundred years earlier.

This sense of disruption, uncertainty and play is central to the Field Broadcast project as a whole, from Birch and Smith’s approach to commissioning – “we know that if we invite other artists to be involved, more interesting things will happen that will surprise us” – to the suspense of the end user not knowing when the video stream might appear.

Once the app is installed, a tantalising NOT LIVE button sits in the corner of the screen, waiting to be activated. “You can’t be ready for it,” says Birch, “you can’t be thinking: ‘now I’m going to experience some art’. It just occurs.”

Download the Field Broadcast App for Mac, Windows or Android at fieldbroadcast.org