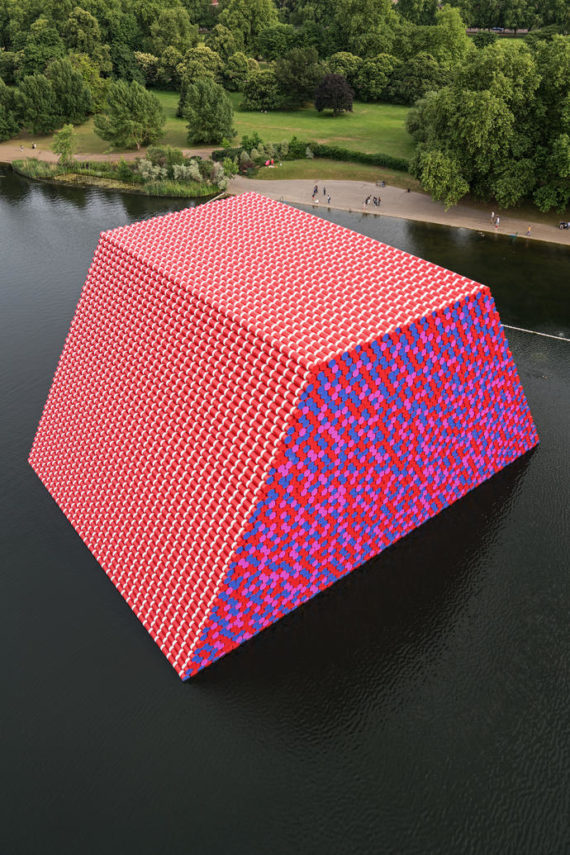 First major outdoor public artwork by Christo in the UK opens in Hyde Park A new temporary sculpture by artist Christo has opened in London’s Hyde Park. The London Mastaba, which will be on display until 23 September, is made up of 7,506 horizontally stacked barrels on a floating platform in the Serpentine Lake.

Explaining how the work will become part of Hyde Park’s environment, Christo said: “The colours will transform with the changes in the light and its reflection on the Serpentine Lake will be like an abstract painting.”

The installation of The London Mastaba coincides with an exhibition at the Serpentine Galleries of Christo and his late wife Jeanne–Claude’s work, which runs until 9 September.

Michael R. Bloomberg, Serpentine Galleries chair, commented: “The Serpentine is known for pushing artistic boundaries and celebrating bold experimentation — and that is the spirit that Christo and Jeanne-Claude exemplify. As a free museum, the Serpentine is also a fitting place to celebrate two of the greatest public artists of our time.”

Fundraising Regulator back Bow Arts Trust over charitable donations dispute Regulator has rebuffed an accusation that it made a ‘manifestly unreasonable’ decision to dismiss artist Rab Harling’s complaint against the arts charity Bow Arts Trust because it could not decide which side was in the right. He had complained that the charity had processed a portion of his rent as a ‘charitable donation’ without gaining his permission.

However, Bow Arts said that it had informed its tenants, including Harling, verbally of the voluntary donation. As Arts Professional reports, the Fundraising Regulator’s investigation uncovered ‘two conflicting versions of events’. Some tenants were aware and some unaware that they could opt-out of the contributions, and as a result, the regulator decided it ‘could no longer reach a conclusion on this point’. As such, it declined to rule that Harling’s donations should be returned.

CCA postpones exhibitions and events following Glasgow School of Art fire Glasgow based gallery CCA has announced it is postponing all its events until 1 July following last week’s fire that devastated Glasgow School of Art. This includes the exhibition ‘Jonas Staal‘s The Scottish-European Parliament’, which had its opening on 15 June, the night of the fire.

In a statement posted on Facebook, CCA said: “Due to the current cordon on Sauchiehall Street, all events and exhibitions at CCA up to and including 1 July have been cancelled, postponed or will move to alternative venues. The building remains closed until 25 June. We hope to reopen to the public as soon as possible, and will update once we have more information.” It had previously posted: “Our thoughts are with our friends and neighbours at Glasgow School of Art and O2 ABC, and the incredible fire service.”

Report from Glasgow Women’s Library calls for more strategic leadership on inequality The Equality in Progress: Research from a Grassroots Museum report says museum decision-makers need a deeper understanding of how inequality is structurally embedded in institutions if they are to increase diversity.

Amongst its findings, the report concludes that “while many museum practitioners and managers express a firm commitment and alignment with the values of equality, a cognitive skills gap on the mechanisms of inequality, and problematic structural frameworks stand in the way of change”.

Public art collective Indecline call out Trump over child detention policy with billboard work
Group altered billboard on Interstate 80 in California’s East Bay to feature the slogan ‘We make kids disappear’, alongside a Munchian image of a screaming child. The work is a comment on President Trump’s heavily criticised immigration policy, which resulted in around 2,300 children being separated from their parents.

Although Trump has now signed an executive order to end the separation of families at the southern border, it is unclear as to how quickly the families can be reunited. Meanwhile, Melania Trump has also faced criticism after wearing a jacket with the slogan ‘I really don’t care. Do U?’ on the way to visiting a child detention centre.

National Gallery to display The Monarch of the Glen One of Scotland’s most famous artworks is set to be displayed at London’s National Gallery alongside a Peter Blake version owned by Sir Paul McCartney. It will be the first time that the work, which was painted by Edwin Landseer, has been shown at the gallery in 160 years.

The painting was originally commissioned for the Houses of Parliament and was first exhibited at the Royal Academy of Arts in 1851, when it was housed in the National Gallery. As such, the display will be something of a homecoming.

Blake’s version was made in acrylics in the 1960s for McCartney, shortly after he bought a property in the Mull of Kintyre. This will be the first time the two works have been seen together.

Last year Blake supported a campaign to save the Landseer original for the nation after its owner, multinational drinks company Diageo, decided to sell it. Speaking to the Guardian, Blake said: “For many years, it was too beautiful, it was too corny, it wasn’t considered to be a great picture, but it has grown to be one. It is a magnificent painting of a magnificent animal – it has earned its right to be a great picture.”

Gagosian Gallery files motion to dismiss lawsuit after Jeff Koons’s studio was accused of failing to deliver a trio of sculptures Steven Tananbaum, an art collector and trustee of New York’s Museum of Modern Art, is suing Gagosian Gallery, Inc. and Jeff Koons, LLC for allegedly failing to deliver three of Koons’s sculptures. He had paid more than $13 million for the works, which Koons’ studio is yet to complete.

However, a motion filed by Gagosian in New York Supreme Court asserts that Tananbaum was adequately briefed about the timelines for the stages of his acquisition.

As Artforum reports, the motion filed on behalf of Koons and Gagosian by New York law firm Dontzin Nagy and Fleissig reads: “Although the Gallery has met all of its obligations under the Purchase Agreements, Mr. Tananbaum now claims that he has the right to walk away because the artist is purportedly taking too long to create the Works and Mr. Tananbaum is not prepared to ‘wait’ any longer. But the imperious demands of a multimillionaire who no longer wants to wait cannot trump the plain and unambiguous language of the Purchase Agreements, which do not require Mr. Koons to create the Works by any specified deadline.”

Anish Kapoor to sue the National Rifle Association over copyright infringement The issue relates to footage of one of Kapoor’s sculptures, Cloud Gate, being used in a recruitment video for the NRA. The clip also includes shots of a number of modernist buildings, including Frank Gehry’s Walt Disney Concert Hall and the Renzo Piano-designed New York Times headquarters.

As Artforum reports, according to the legal complaint, the London based artist is seeking $150,000 in damages per infringement and compensation for his lawyer fees, plus a share of the profits the NRA made from the new memberships it secured after the circulation of the video.