FORMAT 13: “a disruption of the standard image” - a-n The Artists Information Company 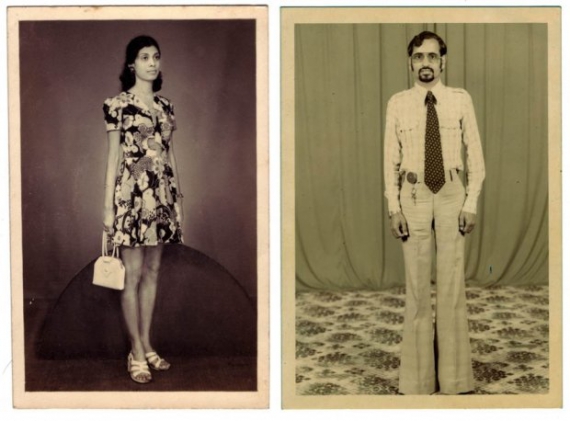 In a nod towards the ever-growing importance of archives and found photography, the main gallery space at QUAD for this year’s FORMAT festival has been given over to the legendary Dutch curator and collector Erik Kessels.

Renowned for his inventive use of vernacular photography, it’s a telling gesture that speaks volumes both about the image culture of which we are implicitly part (we all take pictures, we are all photographed on a daily basis) and the art of recycling what already exists that is forcing the boundaries of what constitutes photographic practice to shift.

Entitled Album Beauty, the exhibition presents unknown images from photo albums that Kessels has spent years amassing at flea markets and second-hand stores across the globe. The hang is eclectic, and designed in such a way that the audience is meant to feel as if they are physically travelling through the lost world of a family album. Images are enlarged to absurdly monumental proportions and displayed as wallpaper, while others are shown in their original format. There are also interactive albums to leaf through and life-size photo props that visitors can put their face through.

In short, Album Beauty harks back to a pre-digital era, where photo albums were once the main memory bank for family history. It also atomises the human condition into all its moments of beauty, sexuality, pride, happiness, youth, competition, exploration, complicity and friendship.

Authorship turned on its head

Through his appropriation and reworking, Kessels simultaneously turns the notion of authorship on its head and draws attention to the power that is attained from divorcing images from their context, rescued from oblivion and put in view of the public gaze. “We live with these images day in day out,” Kessels explains, “but by opting for this format and placing them out of context, you force people to look at them differently as opposed to being just a passive consumer.”

Yet, it is also the possibility of an oppositional reading to this form of popular culture that specifically drew Kessels to such imagery. “A long and dedicated search through photo albums will occasionally reveal something less than perfection,” he says, “something other than an entry in the competition to appear normal. And in these cracks, beauty may be found.” Kessel adds: “It’s a disruption of the standard image. Why not see it this way for a change?”

In a similar vein, Silvermine by Thomas Sauvin of The Archive of Modern Conflict – on display in the former Chocolate Factory – is the result of salvaging more than half a million negatives from a recycling plant north of Beijing, specialising in waste containing silver nitrate, which is largely present in x-rays, cd-roms and negative film.

Bought by the kilo, Sauvin ended up taking away rice bags filled with “thousands of rolls of slobbery, stinky, dusty, scratched, crumpled and humid negative film. They have allowed me access to a highly codified visual universe, where the subject is always standing up straight in the centre of the image, looking into the lens,” explains the Paris-born, Beijing-based photo consultant.

Remarkable in their banality, at least to Western eyes, they show China at home, China in its innocence, China in the aftermath of the Cultural Revolution. “These 20 years are those of China’s economic opening, when people started prospering, travelling, consuming, and having fun,” says Sauvin.

“While reviewing this archive several times, a number of unexpected series naturally started standing out. For instance, at the end of the eighties, as Beijing households started modernising, it was quite usual to be photographed next to your latest purchases. Therefore, I have a tremendous amount of portraits of people posing next to their refrigerator. With these photos we enter people’s homes only to discover posters of Marilyn Monroe, James Dean, Sylvester Stallone…”

Like Kessels, Sauvin has a seemingly inexhaustible appetite for images taken by and of anonymous people. Part of their charm lies in how, free from the burdens of authorship or reputation, we are able to build our own narratives. “The results are these unpretentious, often quite funny, and undoubtedly endearing images,” says Sauvin.

Appropriation and re-contextualisation is by no means a new mode of practice within contemporary art and photography. It is, though, continuing apace with such intensity and experimentation, in large part due to the internet and its countless image-sharing platforms. The question we arrive at then is: Has our exposure to images reached saturation point and thus led us to try to regain innocence, or is vernacular photography just another way of creating fiction out of reality?

FORMAT festival continues until 7 April 2013 at QUAD, The University of Derby and various locations.