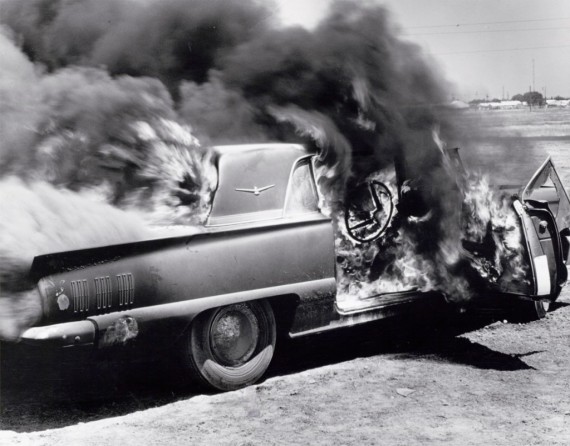 Photography may well have fundamentally altered the way we perceive reality, but drawing distinctions between the documentary, constructed or doctored image is becoming increasingly fraught. Artistically minded photographers are challenging the very notions of probability and truth in order to question the preconceived idea that a photograph acts as material evidence.

Yet it can still be hard to shake off the hangover of trust photographic representation instils in us – that idea that by taking pictures we are bearing witness to an event as it happened before the camera. Moreover, it gets complicated further when aspects of staged and spontaneous photography are present simultaneously in the same image, causing the ‘real’ to fade quickly.

Such interrogations into the relationship between images and knowledge are at the heart of this year’s edition of the biennial FORMAT International Photography Festival. Taking Mike Mandel and Larry Sultan’s legendary Evidence as its point of departure, BEYOND EVIDENCE: An incomplete narratology of photographic truths, the flagship show at QUAD curated by Louise Clements and Lars Willumeit, explores the complexity of visual evidence through various multi-layered and extremely rich bodies of work.

Evidence was, of course, created in 1977, a time that witnessed a remarkable flowering of the medium as art. However, concerns over the nature of photography and how its reality-bearing function could be assaulted by the subjectivity with which photographers approach image-making still exist, albeit radically reconfigured for the digital age.

A small suite of prints and a projection of seminal works from Evidence hang in the entrance to the gallery – found and restructured vernacular images from photographic archives and institutional repositories, documenting, amongst other things, crime scenes, aeronautical engineering tests and industrial experiments. These objective records are stripped of both their captions and context to form a unique and subjective way of seeing the world, mysterious and dubious. In the context of the QUAD exhibition, they prime us for the uses and abuses of ‘photography as proof’ that follows.

Cue the ever-inventive Cristina de Middel‘s May Jayen, a re-enactment of scenes from a failed attempt to rediscover the volcanic island of the same name in the Arctic Ocean. She fuses her own photographs with appropriated historic imagery of a faked landing that actually took place in Iceland, offering up slippery counter-images that operate at the edge of narrative plausibility.

Photography’s unbelievable hoaxes and incredible lies are woven into de Middel’s unique brand of ‘documentary fiction’ but what really emerges is a sense that, in an era of simulacra, an artist’s conscious fabrication of the facts may get closer to the truth of an event than more traditional modes of straight reportage. Believe only half of what you see.

Not too dissimilar in strategy is German artist Sara-Lena Maierhofer’s installation Dear Clark, A Portrait of a Con Man. It’s a fascinating project that uses photography to explore the possibilities of fiction in its narration of real-life imposter Christian Karl Gerhartsreiter, who called himself Clark Rockefeller having developed a false identity as a scion of the wealthy family. It offers only a flicker of a portrait; Gerhartsreiter’s diabolical secrets lie outside the frame and he is currently serving a life sentence at a prison in the United States.

In a different vein, the role of surveillance is addressed firstly through the work of Mishka Henner. Included here are his Dutch Landscapes series – Google Earth views of Holland that have been partially censored by the government in order to hide hundreds of sites deemed sensitive to national security such as royal palaces, fuel depots or army barracks. A conceptual deconstruction of aerial photography, what makes these images especially beguiling is the artful intervention on the part of the Dutch authorities: ostentatious, multi-coloured polygons that have been laid over the concealed area. Here we have evidence that is both absent from view but present via the very act of occlusion.

There’s an obvious kinship with Henner’s work and Tiane Doan na Champassak’s Looters photographs, which depict people captured on CCTV during the riots that occurred in London in August 2011. Enlarged and highly pixelated, these headshots sourced from the Internet just about render the perpetrators identifiable. More importantly, the work asks us on a deeper level to consider the politics of imaging and surveillance technology as an unremitting, silent witness to events and thus a provider of indisputable photographic proof.

A small selection of Simon Menner’s otherwise vast work, Images from the Secret Stasi Archives, tie into this as well. Wallpaper has been made from top-secret photographs depicting officers and spies donning various disguises in order for them to move around as inconspicuously as possible in the now defunct state of East Germany. These secret, official photographs now seem comical, ridiculous even.

Accompanying them is a slideshow of other images that assume more sinister qualities – the eerie and extraordinary Polaroids taken as part of secret house searches. These were used in order to document suspicious parts of the home, enabling those searching a property to put everything back in its place afterwards without leaving any trace. Through his visual account, Menner goes beyond the subject matter and posits an interesting meditation on the problems and shortcomings of surveillance, as well as how photography is complicit in the act.

On the opposite wall, another noteworthy permutation on the theme is KA-BOOM by Andrea Botto. His photographs of blastings show, through direct observation, how explosives are used for demolition purposes, remediation or pyrotechnics. However, Botto’s interest lies more in the surrounding landscape of where the event occurs rather than the explosion itself, presenting us with views that play on ambiguities between time, spectatorship and our viewing position. What may first appear as straightforward records of blasts become more nuanced through a strange synthesis of staging and reality, as if they were pre-scripted performances for the camera or even the result of glitches in the images.

Other highlights of FORMAT include Sarah Pickering’s curious exhibition, Art and Antiquities, appropriately on display at the Derby Museum and Art Gallery. Ruminating on one of the most notorious art forgers in history, Shaun Greenhalgh, the artist reunites a series of photographs, objects and a short film based on a museum exhibition on fakes and forgeries organised by the Art and Antiquities Unit of the Metropolitan Police. The layering of simulation and feedback loops gets hypnotic as we strive to decode the evidence of what’s genuine or otherwise.

Elsewhere, in the Pearson Building – a former school – Mirko Smerdel and Tommaso Tanini, who operate under the research platform Discipula, continue to impress with two separate installations, H. Said he loved us and The Looking Game. The latter is an unusual and controversial reflection on the photographic medium and pairs photographs by serial killer Rodney Alcala, who assumed the alias John Berger, with snippets of text by the British art historian of Ways of Seeing fame. It surely is beyond reasonable doubt that Alcala was aware of John Berger – or was he? The artists’ aim is for us to keep in mind the possibility of this being mere coincidence while reflecting on photography’s meta-processes of production, affect and circulation.

Now in its tenth year, FORMAT International Photography Festival is clearly still going from strength to strength. There’s just so much to see across Derby during the month, far too much to mention in the confines of this report. This, combined with a reputable portfolio review event and conference, make it the number one meeting place in the UK outside of London for photography audiences and ideas alike. Bring on Format 17.