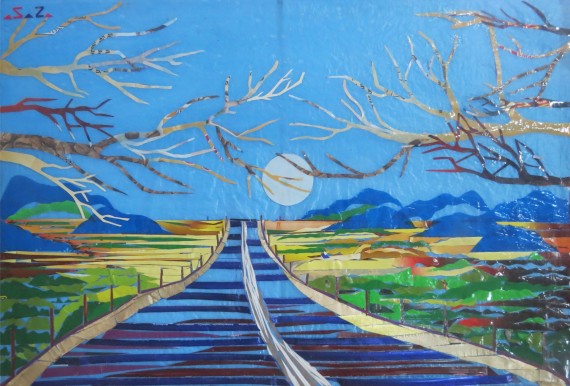 Burmese artist and former political prisoner San Zaw Htway has received the Artraker Award for Impactful Conflict Art 2014 for his work Recyling Myanmar’s Dignity. The piece is one of a series of collages that reflect on the 12 years he spent as a political prisoner in Burma, expressing a “desire for self-expression in the face of extreme deprivation”.

Zaw Htway developed his unique style – which uses recycled materials and garbage – during his internment at the Taungyi Prison, where he was sentenced in 1999 at the age of 24 for engagement with student union activities. He received the £2500 prize during the opening of Art of peace, an exhibition in London which includes works by all 12 artists shortlisted for the awards.

Speaking about his award-winning work, Zaw Htway said: “I began creating artwork while being held as a political prisoner in Burma. I created collages using materials from the prison’s garbage, and exchanged food rations with guards to obtain prohibited items like scissors and glue.

“I want [my work] to raise awareness about the lives of political prisoners in Burma, and to prove that torture, violence and oppression can break a person’s body but cannot take away the spirit within.”

Curated by Nikki Marquardt, the exhibition will tour to Colombo, Kabul and Paris before returning to London in March 2015. The prize-giving ceremony was dedicated to shortlisted artist Bakary Diallo, who died in the recent Air Algeria disaster.

The Artraker Awards 2014 received 250 submissions from 75 countries, including Syria, Iraq, Burma and Mexico. Awards of £2500 were also made to Mexico City-based artist Lorena Woffler for her participatory cultural intervention States of Exception (Artraker Award for Social Impact), and to the London and Syria-based collaboration Mirror Image (Artraker Award for Innovation in Narrative).

Artraker, a voluntary organisation launched in 2012, supports exceptional visual arts projects that shape how people and organisations understand, engage and respond to violent conflict and situations of violence. It was founded by the political artist Manali Jagtap-Nyheim and a group academics and creative organisations.