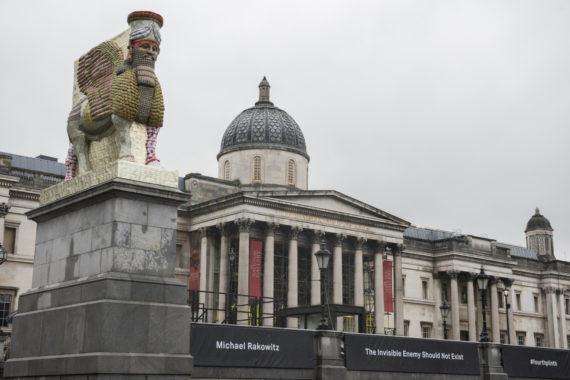 The Mayor of London Sadiq Khan has unveiled the latest Fourth Plinth commission in London’s Trafalgar Square. Chicago-based Michael Rakowitz‘s work The Invisible Enemy Should Not Exist is a recreation the Lamassu, a sculpture that stood at the entrance to the Nergal Gate of Nineveh from c 700 B.C, until it was destroyed by ISIS in 2015.

The work, which takes the form of a winged bull, is part of Rakowitz’s ongoing project whereby he is aiming to recreate the 7,000 objects that were looted from the Iraq Museum in 2003 or destroyed at archaeological sites across the country in the aftermath of the Iraq wars.

In a further reassuming of existing material, the work is made from recycled food packaging. The Lamassu is constructed from 10,500 empty Iraqi date syrup cans, referencing a once-renowned industry decimated by the wars.

Rakowitz said that the work’s unveiling comes at a time when we are witnessing a massive migration of people fleeing Iraq and Syria. “I see this work as a ghost of the original, and as a placeholder for those human lives that cannot be reconstructed, that are still searching for sanctuary.”

Khan added that Rakowitz’s work “shows the power of art to bring to life politics, cultures and personal stories from around the world and across generations.” 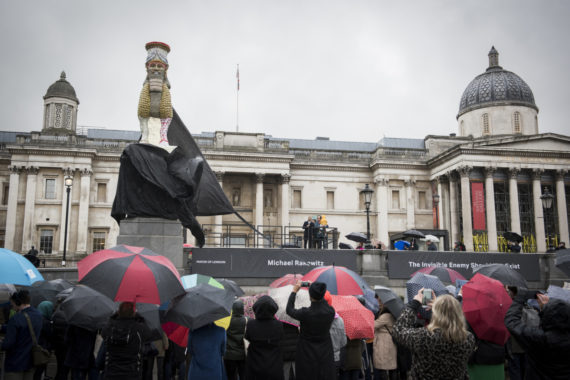 Ekow Eshun, chair of the Fourth Plinth Commissioning Group, said Rakowitz had “created a powerful, timely artwork that reaches back through history to offer pertinent commentary on the world today. I’m sure it will become a new landmark for London.”

In addition to the main commission, Rakowitz is creating a limited-edition artwork using date syrup tins sourced from Karbala in Iraq.

The Fourth Plinth Programme is funded by the Mayor of London with support from Arts Council England. Since its inception in 1998, a number of world-renowned artists have been commissioned to create work for the site.