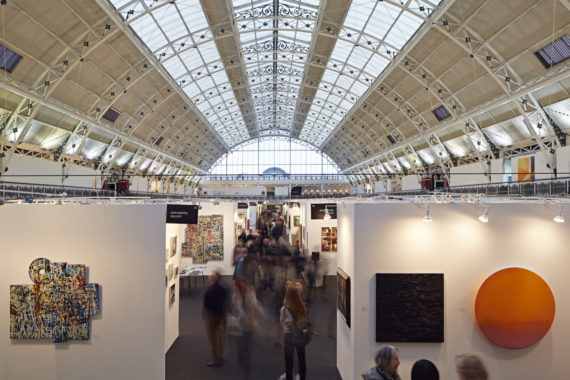 A survey of exhibiting galleries at the London Art Fair has revealed that 49% of respondents believe ensuring free movement of people and goods within the EU is the most important thing the UK government can do to help London maintain its position as a global art hub following the UK’s exit from the European Union.

51 of the 129 galleries exhibiting the fair – which opens today and continues at the Business Design Centre in Islington until 22 January – responded to the survey.

Also of concern is maintaining the current low tax status for importing and exporting goods – identified as a priority by 45% of the galleries.

Sarah Monk, director of London Art Fair, commented: “Our exhibitors are used to riding out the ups and downs of the economy – the art market weathered the most recent recession well – so we’re not too worried about the immediate impact of the Brexit vote.”

She said that uncertainty immediately following the referendum may have led to some reservations from collectors last summer. However, this was balanced out in the latter half of 2016 by international collectors taking advantage of the weakened pound.

“Whatever the outcome of the Brexit negotiations, it is important that London maintains its competitiveness as a global art hub, whether through providing the right conditions for import and export of goods or ensuring free movement of talented people who work in the sector.”

Zavier Ellis, director of exhibiting gallery Charlie Smith London, added that no matter the uncertainty there will still be people who want to collect and buy good art. “There is no hesitancy from the US, and with a weakened currency we’re in a good position to be exporting.

“We just have to have to keep getting out there. We would want the government to retain free movement of goods in the EU and it is imperative to avoid extra tariffs, tax liabilities and administration.”

The survey results were published just as prime minister Theresa May ruled out the UK staying in the single market, as staying in, she said, would mean “not leaving the EU at all”. However, she promised to push for the greatest possible access to the single market following Brexit.

May also confirmed MPs and peers would get a vote on leaving the EU in both Houses of Parliament.

She said: “This agreement should allow for the freest possible trade in goods and services between Britain and the EU’s member states.

“It should give British companies the maximum possible freedom to trade with and operate within European markets and let European businesses do the same in Britain. But I want to be clear: what I am proposing cannot mean membership of the single market.”

Responding to May’s speech, John Kampfner, chief executive of the Creative Industries Federation, said he welcomed May’s “recognition of the urgent need for a reciprocal arrangement with the EU on its nationals working in the UK and those British citizens currently employed in the EU”, adding that the sector had “benefited enormously from the skills and insight EU workers have brought”.

He continued: “However, the willingness to continue to welcome the “brightest and best” begs the question as to how that will be interpreted in future as the UK updates its outdated immigration system. Such judgements can be difficult to determine not least because, despite many well-paid workers in the creative sector, talent is not always commensurate with salary.”

Kampfner also stated that future trade agreements needed to “take into account the importance of effective intellectual property rights protection and enforcement if we are to reap the financial benefits”.

He concluded: “There are some European research and cultural programmes that have been identified as bringing major benefit to the UK so we would welcome a discussion on paying to be able to continue to participate in some of them.”