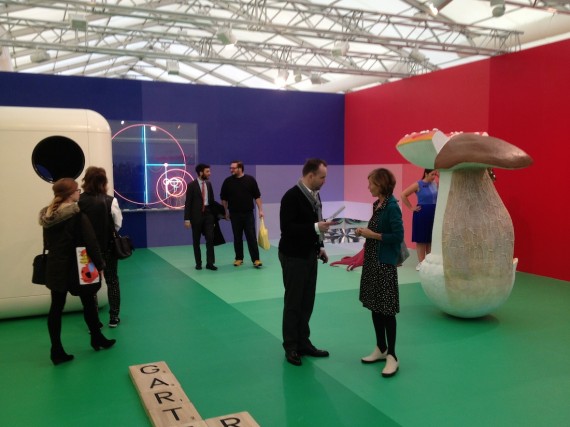 There’s a Lisson Gallery poster in the lift at Regent’s Park tube station that asks: ‘What are we thinking?’ Underneath on the generous white space at the bottom of the clean black typeface, someone has written: ‘TIRED OF FRIEZE’. The Frieze Art Fair is like that – it can wind people up.

Why? It’s ‘Ikea for millionaires’, it’s all about commerce not culture, it’s the market calling the shots and bringing the public galleries and museums along for the ride. Or maybe it’s just a fancy, expensive shop, a place to sell art, a way for artists to get paid for the work they make?

Actually, the Lisson’s booth is rather good. There’s a Cory Arcangel-designed carpet, all photoshop blue with a dayglo rainbow in one corner. There are some neat pebbledash sculptures by Ryan Gander too, floating like a collapsed browny-grey suburban dream. And there’s Gander himself, holding court, chatting with fair goers and potential buyers – the artist in the room, connecting with his audience.

At the Gagosian stand, Carsten Holler has created a jolly children’s play area, with ‘Kindergarten’ arranged in large wooden Scrabble letters. There’s a big plastic dice that kids can climb into and a supersized fungi that wobbles and rattles a bell when you push it. It’s bright and shiny and good fun, and there’s a nice lady called Sarah who, along with another childcare colleague, is on hand to make sure children play safely.

There’s good work, too, from the booths of other artworld big hitters. At David Zwirner, a line of flatscreen monitors forms an L-shape across two walls, a mess of blue cable and headphones littering the floor. The installation by Oscar Murillo includes excerpts from his A Mercantile Novel show at the New York gallery, when he set up a chocolate-making factory. Also at Zwirner’s stand are a series of 42 movingly delicate drawings and paintings on tracing paper from Francis Alys, and there’s an artfully scrappy collection of photography from Wolfgang Tillmans, too. Three great artists, interesting works – that’s the way to do it.

In stark contrast, Hauser & Wirth present a kind of Victorian museum-style greatest hits collection, with walls painted burgundy and a serious green, and works numbered with circular brass tags. Curated by Mark Wallinger in homage to Sigmund Freud’s study, details of the art are on laminated A4 sheets, listing the likes of Phyllida Barlow, Louise Bourgeois, Ellen Gallagher, Martin Creed. It’s a busy and engrossing collection – maybe this is the way to do it, too, but only if you’ve got enough big artists to pull it off.

You expect these galleries to be at Frieze – the rigorous selection process isn’t likely to reject them. But for Gateshead’s Workplace, this year is the first time they’ve not received a Frieze rejection letter. Director Miles Thurlow explains that they’re the only non-London English gallery to ever get into the fair in its 12-year history. It’s a solo presentation of sculpture and collage from Eric Bainbridge that convinced the selectors, all metal and fake fur and large-scale aluminium wall pieces. It’s a strong presentation and Thurlow sounds relieved when he tells me he’s already sold a piece. Attending Frieze is a big financial commitment for a gallery – sales really matter.

With over 160 galleries, this year’s redesigned fair is again like a mini-city of booths, of art in all shapes and sizes and media. There seems to be a little less grandstanding than in previous years, fewer large-scale statements and – possibly – more smaller, quieter works. There’s the smell of soup in the air, too – at least there is as you near the small booth where Japan’s Green Tea Gallery is presenting the work of UNITED BROTHERS.

Part of this year’s new ‘Live’ section of performance-based works, when I arrived artist Ei Arakawa told me that all the free soup made using vegetables grown in Fukushima had gone. His mum, who makes the soup, was there too and Arakawa explained that she brought the dried vegetables over from Japan in her suitcase – and that, of course, they’re not actually radioactive or anything, it’s all a tease, a test, a matter of perceptions. He said they were now selling ‘VIP’ soup at £3 a cup; there was a baseball cap for tips.

There’s no getting away from money at Frieze – it’s what makes it tick and you can see it dripping off a good proportion of the people visiting on Tuesday’s preview day. But there’s no getting away from art, either. Not all of it is great by any means, and sometimes being in this huge marquee in Regent’s Park can feel like being trapped in a parody of contemporary art, a world that feels oblivious to the austerity and mayhem of real life.

I was thinking this when I spotted a knitted text piece by Jonathan Monk on the wall of Tokyo’s Taro Nasu gallery: ‘FUCK EM IF THEY CANT TAKE A JOKE’ it says. It made me smile – and then someone asked the gallerist if it was sold yet, if it was a one-off, should it be displayed in a frame or just as it is? At moments like this, Frieze feels like a crazy, ridiculous place to be. But tired of it? Not just yet.

Review: Frieze London 2013 – a good education in how the art market works by Gillian Mciver

Frieze Projects 2013: “This year it’s not just about the fair” by Dany Louise

Public art: debate questions who and what it is for –  Jack Hutchinson attends the Frieze debate