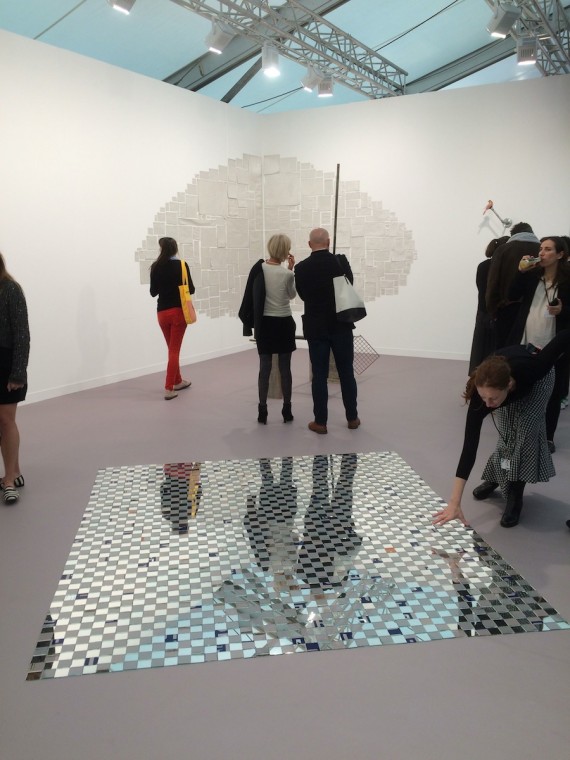 ‘Welcome to Purgatory’ it says on the wall of the entrance corridor to this year’s Frieze London art fair, a message likely to be greeted with a wry smile by those with a queasy ambivalence about the form and function of this kind of event.

But while artist Lutz Bacher’s black walls and scrawled white text – one of seven Frieze Projects’ commissions – sets a darkly detached tone, the light and colour returns in abundance once you’re inside.

Featuring 164 galleries from 27 countries, this 13th edition feels frenetic and fast paced – or maybe that’s just a reflection of how busy it was on Tuesday’s VIP/press view. With strong solo presentations and some inventive group shows, it’s also less gimmicky, more serious in tone – Mark Leckey’s giant inflatable Felix the Cat at Galerie Buchholz being perhaps one exception.

Sculpture is the sole focus of an enjoyable group presentation at Hauser & Wirth, announced by a quote on the wall from Ruth Asawa: “Sculpture is like farming. If you just keep at it, you can get quite a lot done.”

Exhibited on 42 white plinths, a fascinating collection of work by artists including Louise Bourgeois, Paul McCarthy, Mark Wallinger and Isa Genzken creates a grid of modern sculptural history – and an island of thoughtful reflection.

Integral to the fair

Also worth spending some time with this year are the other Frieze Projects commissions which, after a couple of ropey years, now feel like an integral part of the fair again.

Entered via a large grey rectangular box, Jeremy Herbert’s piece requires you to stoop down as you descend into the bowels of the Frieze marquee. There’s a wind machine involved, too.

American artist Rachel Rose – winner of the 2015 Frieze Artist Award – also has some fun with the Frieze tent. She has created a scaled miniature version which we’re invited to go inside. There’s a nice carpet on the floor, relaxing music and colourful theatre lights – it’s like an art fair chill out zone.

There’s space to relax – and recharge your phone – at art collective AYR’s commission, too. Inspired in part by Airbnb, they have created an installation consisting of a series of small bedrooms with double beds, which visitors are encouraged to lounge on.

Most interesting, though, is the work by French art group castillo/corrales. As part of their ongoing project, The Social Life of the Book – which looks at publishing in the art world – they commissioned four writers to produce new sections for an ever-expanding book that will be bound together as one publication once complete.

Only two of the four writers actually hit their deadline for the Frieze commission – a comment on the publishing process itself, perhaps – and their works are available to buy at the fair, along with earlier texts.

At London’s Corvi-Mora, meanwhile, a small collection of Imran Qureshi’s visceral paintings combine both beauty and an aura of death in a blood-red explosion of horror. It’s a jolt of reality from inside the Frieze tent that provides a reminder of the power of art – and perhaps the purgatory of art fairs.

Sluice_2015: talks, takeovers and a new publication by Stephen Palmer