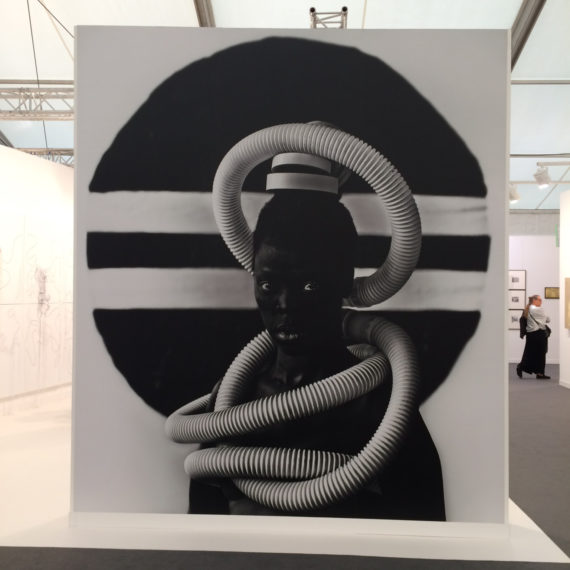 There’s a man pushing one of those mechanical carpet sweepers as I enter this year’s Frieze London art fair, trying to stem the tide of unsightly bits that are already marking the carpeted entrance hall. First thought: it’s a Frieze Projects thing, an artist commission – a critique perhaps of the way that, in post-Grenfell London, this rich person’s art shop feels more incongruous than ever.

Here it is then, a big white money tent in Regent’s Park, keeping the world outside at bay with its BMW courtesy cars and Deutsche Bank Wealth Management Lounge featuring – even more incongruously – photographs by John Akomfrah. Not that I saw them – I had the “wrong passes” (press and ‘VIP’), which weren’t sufficient to get me in.

Of course the cleaner’s not an art commission, he’s a worker keeping the place spick and span, a cog in the machine of commerce much like artists and the art market. And the world outside? That’s not kept at bay at all – it’s here if you look, in artworks that compete for attention amongst the 160-plus gallery booths crammed with art objects of varying quality.

Lawrence Abu Hamdan’s This whole time there were no landmines is a 22-second whipcrack, a looped, blurred video of men desperately clambering over a wire fence as they flee danger. Presented on a square flat screen like a small painting, it’s the muffled sound that accompanies the piece that is most troubling – panicked, indecipherable, on repeat. It seeps through the busy noise of the fair like a haunting earworm.

Abu Hamdan’s acclaimed Rubber Coated Steel is here too, a sticker beside it stating ‘Selected by the Frieze Tate Fund to benefit the Tate Collection 2017’, which it certainly will. Both are part of a serenely powerful presentation by Maureen Paley that includes a small but notable collection of paintings by Kaye Donachie, all hazy intrigue and muted menace. 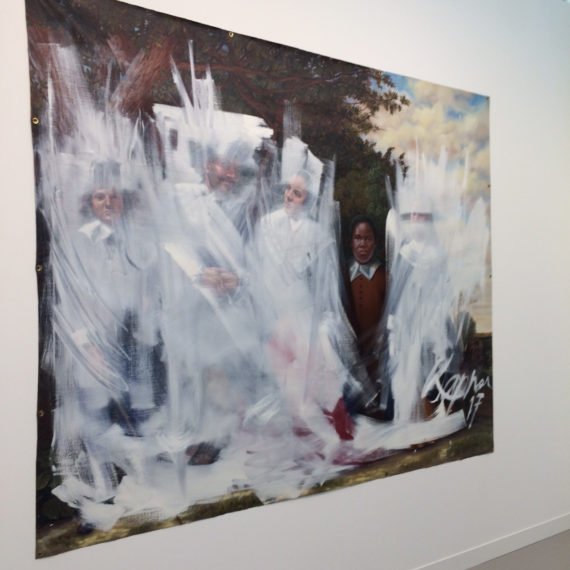 More painting, now at New York gallery Jack Shainman, where Titus Kaphar’s Shifting the Gaze does just that, ‘amending’ history and the black experience with a simple gesture – white washing out all but the one black face in an adaptation of an historic Frank Hals painting of familial wealth and privilege. It’s hung adjacent to a large black and white photograph by Richard Mosse that forensically records a refugee camp in the Lebanon, a city of makeshift shelters and human despair.

The photographs of Zanele Muholi at Johannesburg gallery Stevenson are equally unmissable, with one work blown up full height on the outside of the booth. Starkly black and white, it shows a black woman wrapped in what looks like industrial vacuum cleaner tubes. Muholi is known for her uncompromising portraits of fellow South Africans persecuted for their sexuality and the sense of her subjects’ marginal status ripples through the work. 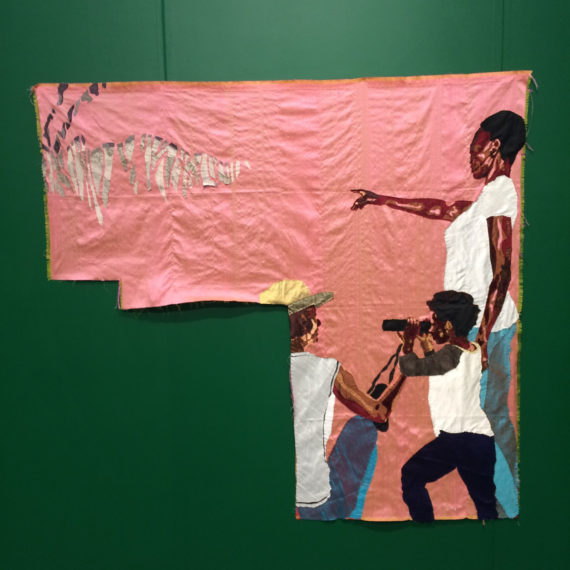 The Malawi-born artist Billie Zangewa offers a less confrontational narrative with her solo presentation for Cape Town gallery, Blank, part of the Focus section for emerging galleries. Working with silk off-cuts, her hand-stitched scenes of everyday life in South Africa possess a beautiful mundanity in of themselves, but it’s the sense of things missing, of people and activity cut out of the picture, that really makes them engaging.

The intersection between the domestic and public sphere also comes under scrutiny at The Sunday Painter. Emma Hart’s Commercial Breakz is a series of ceramic satellite dishes arranged on the booth’s walls. These colourfully painted and patterned dishes are a playful unpicking of the inside/outside nature of this ubiquitous fixture in the urban landscape, turning a functional eyesore into something decorative and desirable – although the signal’s clearly going to be rubbish. 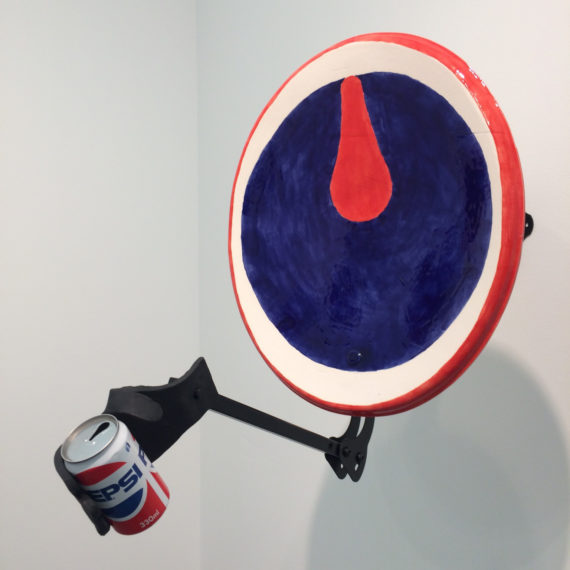 If this year’s Frieze is giving off signals as a bellwether of the art market, it’s that times are uncertain, complicated; there’s a feeling of hunkering down and riding the storm. Put another way, despite all the usual signs of wealth on show as collectors roam the booths and money talks, there’s fewer big works, less hubris. Times have changed, commercial galleries have closed, Trump, Brexit, etc, etc. Confidence, understandably, has been shaken.

Perhaps that is playing its part in what seems to be an increased tendency for galleries to show older works rather than focusing on the new. Like in 2016 with its ‘90s section, this year also features a small portion of the fair dedicated to the past. ‘Sex Work: Feminist Art & Radical Politics’ features nine solo presentations of work from the 1970s and ‘80s with artists Mary Beth Edelson and Dorothy Iannone being highlights (both snapped up by that Frieze Tate Fund, too). But context is all, surely, and while much of this may have been taboo breaking and radical at the time, some of the works here seem to contribute to the ongoing objectification of women rather than subvert it. 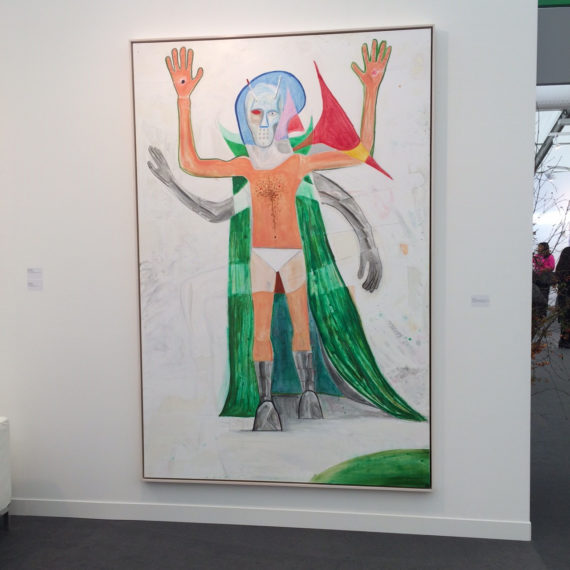 Some things at Frieze have such a strong presence that they transcend both the passage of time and the specifics of the day. Melvin Edwards’ welded steel sculptures at Stephen Friedman Gallery carry the weight of history and communicate a continuity of resistance. His Lynch Fragments series of wall reliefs has been ongoing since 1963 and the new works here have a power that is both timely and timeless.

Mostly, though, for the art viewer rather than buyer, the Frieze experience can be strangely exhausting if you actually attempt to decode the myriad works on show. As the title of Jason Fox’s barmily prescient painting at Galerie Peter Kilchmann puts it, you can feel so visually overloaded that your head screams: I don’t even know what okay is anymore. The man sweeping the carpets probably feels the same.