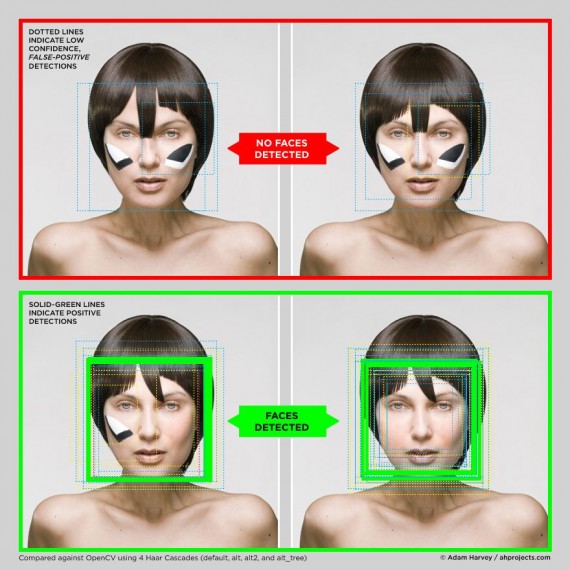 The approach taken by City Fictions ­– the ‘pop-up urban experiment’ at the heart of this year’s FutureEverything festival in Manchester – is a playful one. All around the City Fictions site, a group of buildings to the north of the city centre that were formerly occupied by the Co-Operative Group, you encountered Blue Plaques.

Designed by Storystorm Cityfictions, these commemorate important local events, many of which have not yet happened – such as the Mass Brainwave of March 31, 2020, when ‘citizens of Manchester participated in a mass neural prosthesis experiment to control patterns of thought’. Thanks to PAN Studio’s Hello Everything project, you could also wander around the locale using SMS texts to communicate with buildings and street furniture.

But the biggest theme on display was a serious one: surveillance culture. Among the amusing results, CV Dazzle Anon Salon attracted much interest – here, hairdressing and cosmetic makeovers were on offer, disguising the recipient from identification via CCTV. The Salon was developed by Adam Harvey, inspired by first world war naval ‘dazzle’ camouflage.

At the City Fictions Museum, in the Old Bank building, artist James Bridle displayed a shoulder-strapped device called a ‘spaulder’, named after a piece of medieval armour, which alerts the wearer to any nearby CCTV cameras.

Another piece of wearable technology shown here promises to resist experimental ‘neuro-imaging surveillance technology’, which threatens to read our thoughts. Lisa Kori Chung and Caitlin Morris, in collaboration with the Italian design agency FABRICA, have come up with a series of strangely stylish accessories, which, worn around the head, offer privacy with a rather asymmetrical, gothic look.

In Federation House, artists’ workshops got visitors involved hands-on with the hypothetical new Manchester. At Rob Hordijk and Joker Nies’s Benjolin Workshop, 20 or so participants welded circuit boards towards the goal of making a synthesiser by teatime. Frequent squeaks, squalls and screams from nearby speakers indicated probable success.

Rivalling this for noise was a knitting machine, which visitors took turns to operate, helping to make the Punchcard Economy, a banner inspired by industrial reformer and socialist Robert Owen’s Eight Hour Day Movement, with its slogan, ‘Eight Hours Labour, Eight Hours Recreation, Eight Hours Rest’. Artist Sam Meech employed a ‘virtual punchcard’ on the project’s website to map out contemporary working hours in the digital economy, converted into a knitting pattern in which one misplaced stitch represents every hour exceeding Owen’s eight hour limit.

From idealism to pessimism

Politically, FutureEverything, with this year’s theme Tools For Unknown Futures, reached for levels of idealism that Owen would have been proud of. In particular the Spanish architecture and design group Zuloark‘s Parliament of Urban Rights was a simple but agile device. A portable debating space made of metal and wood which anyone can rebuild to their own design and use for democratic purposes, after its appearance at City Fictions it goes on tour. Look out for a parliament near you.

At the opposite extreme, however, there’s pessimism. In the basement of the Hanover Building, among apparently genuine signage for emergency refuge shelters, was the installation, Endless War, by YoHa and Matthew Fuller.

Produced as part of the festival’s Data as Culture strand, in collaboration with the Open Data Institute and Lighthouse, it’s a three-screen projection of Wikileaks’ Afghan War Diary – 91,000 documents written by soldiers and intelligence officers, covering the war from 2004 to 2010. It is chilling to watch – especially in a chilly, dark space.

Data as Culture also provided one of the festival’s funnier moments: Pink Sheet Method, by performance artists Thickear. It’s a piece of tongue-in-cheek bureaucracy with some serious debates at its heart. You get given a triplicate paper form, and after being warned “do not fill in this art form yourself”, you are gently interrogated by a man wearing a pink tie and grey shirt.

The conversation ranges from your age and hair colour to the directions a technologically-driven culture, greedy for any information it can gather on us, may be heading. You keep the white top-sheet as an original artwork, and the two copies, pink and blue, go forward to future art events. The performance makes you think, but also preserves your thoughts in the artwork.

It wasn’t just a spell of warm weather that told you City Fictions would coincide with the arrival of spring. There was also a touch of tribal ritual in the air. In ‘New City Square’, temporarily taking over disused space at the back of the CIS Building, two artists in facemasks were moulding some oddly-shaped bricks out of liquid plaster.

“It’s a skewed rhombus,” one of them said, when asked to define the brick’s precise shape. Put together, the white bricks formed a kind of pyramid. This, a building project by Blank Media Collective called the Social Capital structure, was destined to last for less than a day – at 5.30pm it was destroyed and buried under a pile of earth.

The idea was to explore prehistoric traditions of building a ‘great hall’ that would be razed to the ground immediately after completion. This kind of participatory sculpture is really intended to exist more in the memories of the people involved than in solid reality. The future, we’re reminded, is realised in the imagination.