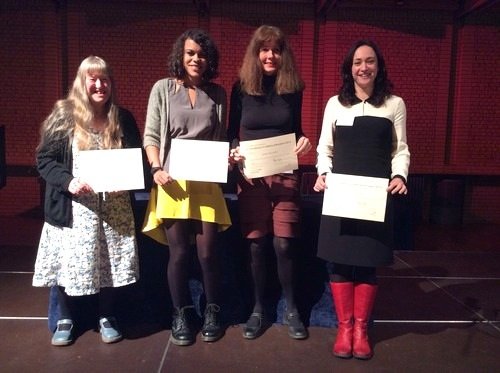 The four winners of this year’s Marsh Awards for Excellence in Gallery Education were announced at a ceremony at the engage International Conference in Birmingham last week.

This year’s recipients are drawn from galleries in London, Exeter and Leicester. They were presented their award by Dorothy Wilson MBE FRSA, Artistic Director and Chief Executive, mac Birmingham, and Brian Marsh OBE, Chairman of the Marsh Christian Trust.

And the winners are…

Clare Gittings is the Learning Manager at the National Portrait Gallery, where she has worked for the past 24 years. She delivers a programme to around 15,000 primary and secondary children a year.

Lisa Jacques is Learning Officer for Contemporary Art at New Walk Museum and Art Gallery, Leicester, nominated for her achievements in relation to an exhibition of renowned photographer August Sander.

Freelance artist educator Jenny Mellings was nominated by her colleagues at Spacex, Exeter for her dedication to gallery education. She has run over 1000 workshops at Spacex alone.

Ella Phillips is the Education Manager at October Gallery, London. Her colleagues nominated her for successful efforts to expand the gallery’s education programme, securing new funding and developing innovative projects with various groups.

Each winner received prize money of £500 to spend on their professional development.

Jane Sillis, Director of engage, said: “We’re delighted to celebrate the achievements of colleagues in our sector. Colleagues working in education in galleries and the visual arts play a key role in supporting audiences to engage with art and artists, often for the first time. The high standard of nominations for the Marsh Awards for Excellence in Gallery Education demonstrates both the importance and dedication of education colleagues in galleries and the visual arts.”

More information on the winners and their work at www.engage.org/marsh-2013