GI director Sarah McCrory: "There is room for funny in art" - a-n The Artists Information Company 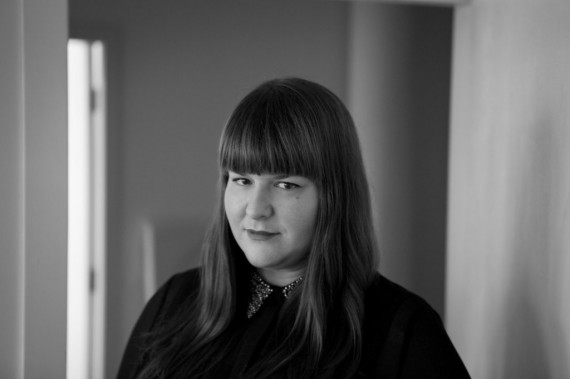 There’s probably a point in every big arts project when the person in charge wants to have a good cry. But as the ever-effervescent director of Glasgow International Sarah McCrory wells up, it’s not exhaustion in the face of launching her first edition of the 18-day visual arts festival that is making her emotional.

It comes when she describes opening up crates of work by the late Brazilian artist Hudinilson Jr, whose little-seen art will feature at the heart of her Director’s Programme at the McLellan Galleries in Glasgow. “His work was just so dependent on contingency,” she says. “He made work with whatever material came to hand.” She means that quite literally, for as well as creating work in homemade books and ordinary desk diaries, the artist stiffened his worn socks and old pants with paint and glue, transforming them into forlorn sculpture.

Hudinilson Jr, who died in August last year at the age of 56, had been part of a close-knit Sao Paulo scene. He worked in the early 1980s with radical and illicit performance, and curated an important exhibition of Xerox art as well as showing at the Havana Biennial. But in recent years he had little money for materials. “All of the work comes directly from his bedroom studio,” McCrory explains. “Some of our hang is based on snapshots of the room.”

McCrory’s Glasgow International (GI) programme has a likable and playful flavour with an emphasis on hidden spaces. The impressive McLellan, a purpose-built suite of elegant Victorian Galleries, has been largely mothballed since 2006 and has an atmosphere of fading grandeur. It will also show new work by Charlotte Prodger and a mini-retrospective of Jordan Wolfson. “It’s brilliant to get into the place, it allows us to do so much.”

Other venues in the city include the now drained Govanhill Baths, an underground car park and a tiny train station waiting room. On the eve of opening, GI features more than 75 artists and is still expanding: “As the artists arrive and people organise events and talks, the number is still growing.”

GI is unique in the way that it melds artist-led and local programming with a central scheme of exhibitions created by the director, with more than 50 venues taking part this year. McCrory has retained this structure and her programme, although not strictly thematic, brings together key examples of post-internet art including the technical innovation of Jordan Wolfson and the works of the young US painter Avery Singer, whose painstakingly crafted work has its origins in digital imaging. “It’s nice to be able to introduce international voices that were maybe missing in Scottish practice,” she explains. “Post-internet practices, people working with new technology in exciting ways.”

At the Gallery of Modern Art, McCrory has worked with Aleksandra Domanović. “She is looking at feminism in technology and science. Her large-scale banners are prints and their technique apes how animators use acetates. On them she is reproducing images of 3D models. All the objects and subject matters relate to films with special relationships with female protagonists.” The images includes an historic rejection letter from Disney in which an applicant was told that women were not hired as animation artists per se, only to do ‘filling-in’.

McCrory comes to the helm for the sixth edition of GI after Francis McKee and Katrina Brown. An artist and graduate of the curating course at the Royal College of Art, she brings a wealth of grassroots experience at Studio Voltaire and most recently at the helm of Frieze Projects where she proved energetic and unpredictable, curating projects with Marvin Gaye Chetwynd and Pierre Huyghe.

“I’m really proud of the level of ambition of the shows at GI,” she says now. “And I’m very proud to show someone like the US artist Michael Smith who has been making work that is based on humour for the last 35 years. He is looking at the American dream. He and Bedwyr Williams both use humour in different ways, but there is also a darkness through it. It’s great having them in the same building at Tramway.” Williams has driven a bus into the enormous Tramway space for the presentation of a new film.

If the director has on occasion been moved to tears by the experience, she’s hoping that audiences will also experience emotions that are often considered taboo in the art world: laughter in particular. “Someone who shall remain nameless once jeered my taste, saying that there is no room in art for funny. I totally disagree.”