Hackney WickED Open Studios: “It may be the last time” - a-n The Artists Information Company 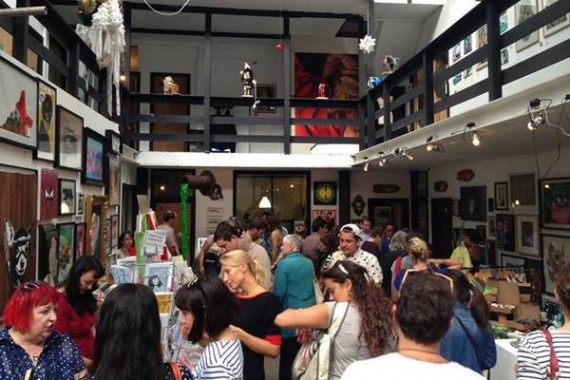 Hackney Wick artists are coming together to organise a DIY Open Studios event this weekend (26-28 June 2015), with the aim of celebrating the artist and creative community in the area.

The event follows the decision in April not to hold the successful Hackney WickED Art Festival this year due to spiralling production costs, in part due to the infrastructure required to manage the festival’s 30,000-plus crowds.

Anna Maloney, director of Hackney WickED, said: “The Open Studio element is one of the most vital aspects of the festival, for both the local community and visitors to the area. At such an uncertain time, we felt it was important to celebrate the art and area as we know it. I encourage people to open their studios and work spaces to the public for what may be the last time.”

Launched in 2008, the annual festival began life as a response to the London 2012 Olympics and the redevelopment of the area, which threatened the demolition of local art spaces. Utilising the area’s warehouse spaces, street corners and yards throughout The Wick and Fish Island area, last year was the festival’s sixth edition after taking a year off in 2012 due to the Olympics.

The open studios are being facilitated by Hackney WickED Community Interest Company as part of the London Festival of Architecture, which launched on 1 June and continues until the end of the month.

Should this prove to be Hackney WickED’s swan song, Maloney wants to go out with a bang. She comments: “When our friends decided to develop a Hackney Wick contribution to the London Architecture Festival it seemed to be the ideal time to come together and help facilitate this DIY Open Studios event. The ethos is, ‘let’s enjoy it it whilst we can’.”

Sailing through the Hackney WickED riviera