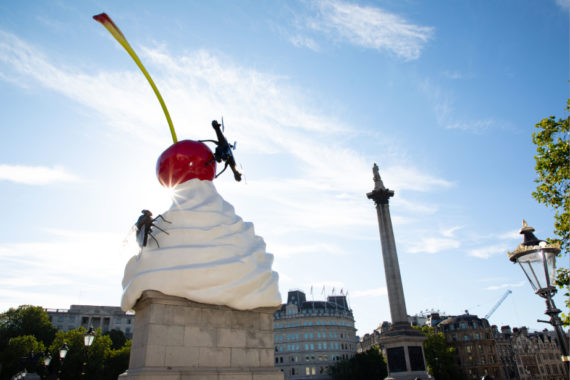 Following a four month delay due to the impact of the coronavirus pandemic, Heather Phillipson’s commission for the Fourth Plinth in Trafalgar Square has finally been unveiled. The 9.4m work, which is the tallest at the site so far, features a giant swirl of whipped cream, a cherry, a fly and a drone that transmits a live feed of Trafalgar Square.

Entitled THE END, it also transmits a live feed of Trafalgar Square picked up by the drone’s camera on a dedicated website www.theend.today, offering viewers a ‘sculpture’s eye perspective’ on the surrounding area.

THE END is also the first fully accessible commission on the Fourth Plinth. There is a braille panel included on the plaque, a tactile image of the work, and an audio description of the work on the GLA’s website.

Acknowledging the seismic global changes of the past few months, Phillipson has also been commissioned by Art on the Underground to produce a new online work to accompany THE END. The audio-collage VOLTA explores ‘upheaval, renewal and possibility’ and combines layering of voice, sound effects and music samples.

Commenting on the work, Phillipson says: “When I conceived of THE END, I wanted to take into account both the political and physical aspects of Trafalgar Square and the plinth. I’m honoured to have been selected to make work for such a significant public site, and to see THE END scaled up for its ultimate size and context – one in which the surrounding architecture and its population are participants in a mis-scaled landscape, magnifying the banal, and our cohabitation with other lifeforms, to apocalyptic proportions.”

The 13th Fourth Plinth commission, it follows on from The Invisible Enemy Should Not Exist by Michael Rakowitz. Both works were selected in 2017 by the Fourth Plinth Commission Group, following an exhibition at the National Gallery where 10,000 people voted for their favourite shortlisted artwork.

Ekow Eshun, Chair of the Fourth Plinth Commissioning Group, said: “THE END is an audacious and beguiling new work by Heather Phillipson. It expresses something of the fraught times that we’re currently living through while also standing in conversation with the artistic and social history of Trafalgar Square. I’m sure this will be a hugely popular commission that will inspire everyone who sees it physically and experiences it digitally.”

The Fourth Plinth Programme is funded by the Mayor of London with support from Arts Council England. Since its inception in 1998, a number of world-renowned artists have been commissioned to create work for the site.

THE END will be in situ at Trafalgar Square, London, until spring 2022.