Hotel Elephant: a platform for artists to exhibit and sell in their neighbourhood - a-n The Artists Information Company 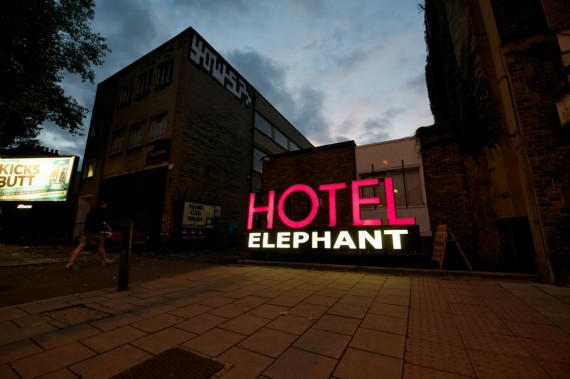 “We’re really happy to be back in Newington Causeway with the spaces that we have,” says Emily Woodhouse as she mans Hotel Elephant‘s first shop and café in their new space in Elephant & Castle. “We have a street frontage – a shop which opens onto the high street – and then round the corner we have two warehouses with around 15,000 square feet of space.”

The artist and co-director of this South London not-for-profit organisation is on her third gallery move in as many years. In that time, she has had plenty of opportunity to discover what attracts a wide public – and she feels that being on a busy street is key.

It’s good news, then, that Hotel Elephant has relocated from a disused former doctor’s surgery on the striking but deserted Heygate Estate, to a busy spot on the nearby Newington Causeway. In fact the new space is almost directly opposite the gallery’s original site.

“We’ve had people come in who said they visited us when we were on the other side of the road and who we had lost when we moved,” explains Woodhouse. “The other day we had some of the children coming back from school and they were waving through the window.”

Hotel Elephant was set up in 2009 by artist Reuben Powell. It started in his studio space at the Elephant and Castle shopping centre, where he also ran education projects. When he moved his studio to a warehouse on Newington Causeway in 2010, plans for a gallery space started to take shape. With a retractable shutter entrance direct onto the street, it was a perfect location to entice a wide audience. Woodhouse, at the time a second year undergraduate student at Camberwell College of Art and Design, joined Powell and they launched the gallery in January 2011. They remained there until October 2012.

“We knew we had to leave our first space in Newington Causeway and the space on the Heygate was offered to us. It was a difficult space to get people to, but when they did came along they thought it was great and found it very exciting.”

Building a community in a contested site

Having a solid education programme and commitment to the local community has been essential for Hotel Elephant. In particular, it has enabled them to deliver a sympathetic programme that has avoided the kind of public wrath generated by Artangel’s recent proposals for a temporary sculpture by Mike Nelson on Heygate Estate, which is in the process of being demolished.

Aware of the contentions around the site – the estate is being demolished to make way for a £1.5 billion regeneration project, and the last resident was forcibly evicted in November – the pair have done as much as possible to create something that contributes to the local community, while also supporting the work of locally-based artists. Powell, who has lived in Elephant and Castle for 20 years, negotiated with the developers of the Heygate Estate to provide access to one of the vacated flats, and has been using the space to host drawing excursions for groups of school children.

And while not as accessible as the Newington Causeway, Woodhouse has fond feelings for Heygate Estate site. It enabled them to establish their first studio spaces and dip their toes into commissioning with two site-specific sculptural works by Nathan Murphy and Cheryl Field.

“There have been a lot of works made about and particularly concerned with the social and political aspects of the estate, and [with the two sculptural works] it seemed to be quite a relevant time to ask someone to just do something that commented on the fact that it was a huge mass that dominated the local surroundings, but at the same time a collection of void spaces,” explains Woodhouse.

“What we really tried to do was not to have an opinion or comment on local political issues or the redevelopment of the estate. Our focus was to do what we do and to do good work. We were just focused on having a positive use of the space.”

Hotel Elephant will be in its new space on the Newington Causeway until summer 2014 at the very least – it is caretaking properties that are owned by Peabody Housing Trust until they are required for development. With three spaces to run, the directors are looking to build more partnerships. They will continue to show artists’ work in the gallery and will also have a film programme, given that the space houses a large back projection screen.

“We will be carrying on our studio space and hopefully creating more affordable spaces for local artists. The main focus is to provide a platform for artists to exhibit, but also to sell in their neighbourhood,” says Woodhouse. “Our longterm plan would be to find a permanent home. The security of being in one place means you can establish things and build on them. When we do move from site to site, we are adapting what we do to each space.”

With each move, Hotel Elephant have expanded their portfolio of activities, with the hope of gradually becoming fully self-sufficient. Surviving on hard graft, the odd local authority grant, education workshops and studios, Woodhouse is hoping that the cafe and shop will generate enough revenue to provide part-time employment for her. In a separate project, there are also plans to open a café gallery, The Butterfly, as part of the development of the old Southwark Town Hall on Peckham Road.