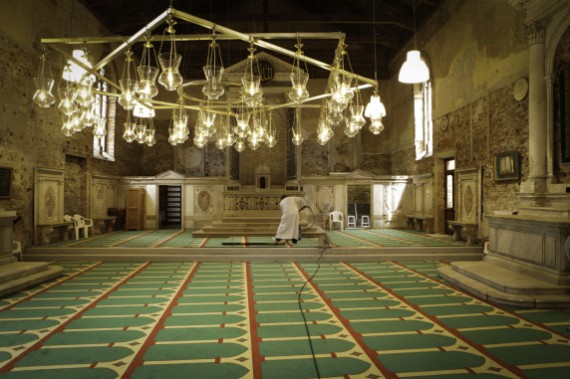 The Icelandic Pavilion launched at the 56th Venice Biennale to a flurry of interest back in May – it had, after all, turned a former Catholic church into a non-functioning mosque.

But within less than two weeks of the opening of the 2015 Venice Biennale, The Mosque by artist Christoph Büchel had been closed by the Venetian authorities, citing health and safety reasons. In that short time, it had been embraced by some of the city’s 20,000 Muslims as a place of prayer in a mosque-free city.

Now, a legal appeal to the Regional Administrative Court in Venice by pavilion commissioners the Icelandic Art Center (IAC) – which included a request on 29 July to fast-track the process to enable a chance to reopen before the end of the Biennale in November – has been abandoned.

The IAC’s move follows the court’s decision on 31 July to reject the fast-track request. This means that any hearing on the matter would be unlikely to happen until next year.

A statement from the IAC said: “Continuing our appeal would… only address the matter of possible compensation for damages due in relation to the shutting down of the Pavilion and would not be useful in helping us achieve our primary goal: reopening The Mosque project for the remainder of the Biennale.”

The IAC state that it will instead “seek possible alternative ways to keep The Mosque project accessible to the public for the remainder of the exhibition period of the Venice Biennale.”

In an earlier statement on its website, the IAC outlines its reasons for originally pursuing an appeal. In doing so it is critical of the Biennale for not supporting it when it was initially closed down by the authorities on 22 May.

The statement claims that, having gained access to police files on the case after a four-week waiting period, it discovered that “Venetian Municipality and Police authorities assumed/believed that the Icelandic Pavilion was a front for organised Islamic activities and prayer and had requested a statement from the Office of the Biennale confirming that the Pavilion was indeed a work of art. The Biennale did not respond to this request.”

The IAC’s appeal, presented by Padua-based lawyer Marco Ferrero, included testimony from internationally acclaimed art historians and curators stating that The Mosque was indeed a work of art. Opinion, though, has been divided on the merits of Büchel’s piece, with some dismissing it as an insensitive act that has made things worse for Muslims in the city.