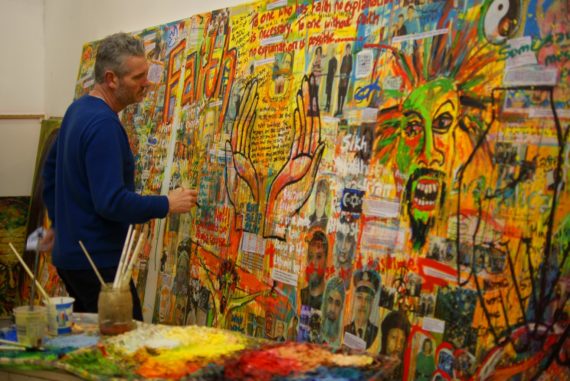 Vandals target display of multifaith artworks at Gloucester Cathedral The art show, ‘Faith’, put together by portrait artist Russell Haines, was at the centre of an international row last month when Christian groups heavily criticised the use of Islamic images and the reciting of a Muslim prayer inside the historic cathedral buildings.

Museum of the Moving Image shuts down Shia LaBeouf installation calling it a ‘flashpoint for violence’ The anti-Trump work, a collaboration between LaBeouf and artists Luke Turner and Nastja Sade Ronkko, consisted of a camera located on the exterior of the museum, into which visitors and passersby were invited to say, “he will not divide us,” over the course of the next four years.

Arts Council England prepares to fund an additional 216 NPOs from 2018 As many as 900 arts organisations and museums could be admitted into the national portfolio in the next funding round. ACE has also ring-fenced a record £409m per annum for the expanded portfolio for 2018-22, £83m more than has been allocated for NPOs in 2017/18.

Pieter Brueghel the Younger painting is authenticated The artist’s Wedding Dance in the Open Air spent many years undated and unsigned in storage at the Holburne Museum. Now recognised as its true self, it stands as the centerpiece of a new exhibition, ‘Bruegel Defining a Dynasty’, with a label that firmly attributes it to the 17th-century Flemish painter.

Creative Time appoints Elvira Dyangani Ose as new senior curator The former curator of international art at Tate Modern joins the New York organisation from Goldsmiths, London and the Thought Council at the Fondazione Prada, Milan. She replaces Nato Thompson, who has been appointed artistic director.

UK export license denied for Pontormo portrait Culture secretary, Karen Bradley, has formally refused an export licence meaning the Pontormo work will now have to remain in the UK. However, as reported in last week’s In Brief, National Gallery London’s £30m offer to buy the painting has also been rejected by its US owner due to the value of the pound against the dollar plunging.

New cultural plan for New York City faces objections from artists The Department of Cultural Affairs is devising a plan for June 2017 that would manage and organize New York City’s resources for arts and culture. However, local artists and activists Alicia Grullón, Shellyne Rodriguez, and Jenny Dubnau have questioned the involvement of real estate development firms in the development of the plan.