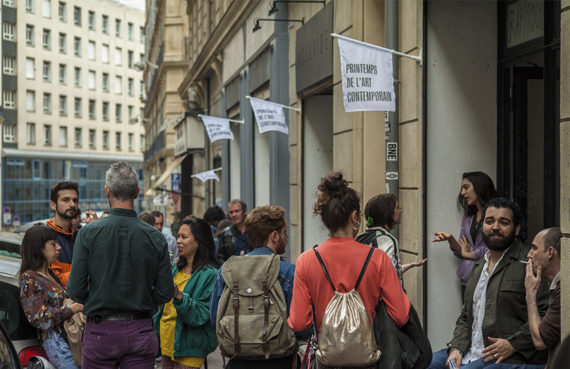 Marseille is a place with change on its mind. With a mix of strident local politics and muscular private commerce, this multicultural port city has in recent years been attempting to shake off its image as somewhere that has seen better days – a graffitied urban sprawl with a reputation for extreme poverty and crime.

As part of this, those who run France’s second city have made art and culture one of their priorities – after all, in Marie-Hélène Féraud-Gregori, cited by many as a key player in bringing Manifesta to Marseille in 2020, it even has a councillor whose job title includes the words ‘contemporary art’. Artists, then, are entangled in this process of reinvention, tightly woven into a social and cultural fabric that is being stretched, strained and – some might argue – pushed around by agendas which appear beyond their control.

The city authorities’ commitment to art reveals itself in a variety of ways and, in many respects, follows a familiar script of civic regeneration tactics the aim of which is to boost both artistic production and cultural tourism. The latter is hard for even the most casual viewer to miss. It’s there in plain sight in the spectacular MuCEM (Museum of European and Mediterranean Cultures), its seafront site providing an instant dose of cultural bling for the city’s cruise ship sightseers. 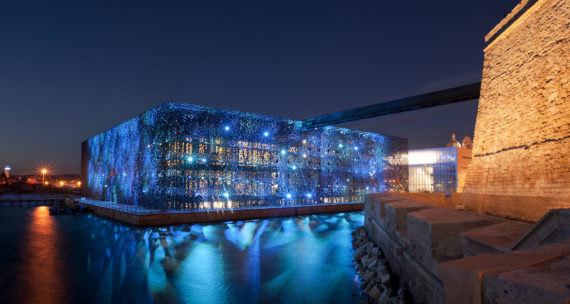 Moved from Paris to its new home and opened in 2013 to coincide with Marseille’s tenure as the European City of Culture, MuCEM shares an anniversary with the city’s similarly shiny FRAC (Fonds Regional d’Art Contemporain), designed by Japanese architect Kengo Kuma. More recently, but without the public money or fanfare, last August saw the creation of a new stretch of seven gallery spaces – commercial, non-profit, local, Parisian – on Rue du Chevalier Roze, a down-at-heel run of former shops behind the once grand Rue de la Republique. The spaces have been gifted by a property developer and are rent-free for three years.

All this frenetic activity and future planning is, although obliquely, being reflected in the work of Marseille’s artists. Artists, for example, like Ugo Schiavi. For his show at the small Double V Gallery, one of the city’s newer commercial spaces which opened in December 2016, he uses concrete casting techniques to bring Marseille’s past and present into an edgy dialogue, capturing and repurposing elements of the city’s public statutory. His method is a bit guerrilla: without permission but wearing a high-vis jacket that gives the illusion of officialdom, he takes to the streets to make moulds of heads, torsos, decorative fish and more. An installation in the gallery’s front-facing window reflects the city’s evolution in another way, combining street detritus, paving slabs and the plants that somehow always manage to grow up through the cracks. 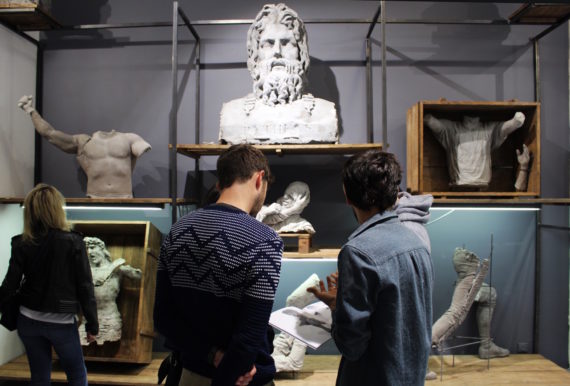 I visit Double V on my final day of a brief three-night trip to the city during the annual Printemps De L’Art Contemporain, which this year marks its 10th festival. Organised by Marseille Expos – a network of 49 venues that range in size from large museums like MuCEM and Les Musée des Beaux-Arts, to tiny not-for-profit shopfront-style galleries – PAC brings together this diverse and disparate scene for an intense but short period of artistic activity. Marseille Expos does not curate the festival or impose a theme but simply promotes and coordinates it, acting as a benevolent overseer while encouraging discourse and collaboration. (The organisation also supports the annual – since 2007 – Art-O-Rama art fair.)

Double V’s young founder and director, Nicolas Veidig-Favarel, talks eloquently and with passion about the uniqueness of his city and the artists he represents. His enthusiasm is infectious but by no means unusual. While mindful of the spectre of gentrification that accompanies the city’s attempts to use artists as cultural bait for investors and developers, during my whistle-stop tour of the festival the fleeting conversations I have with practitioners, gallerists, curators, art historians and others have a shared sense of stubborn pragmatism, fuelled by a belief in Marseille as a city where artists can produce, show and sometimes even sell their work. 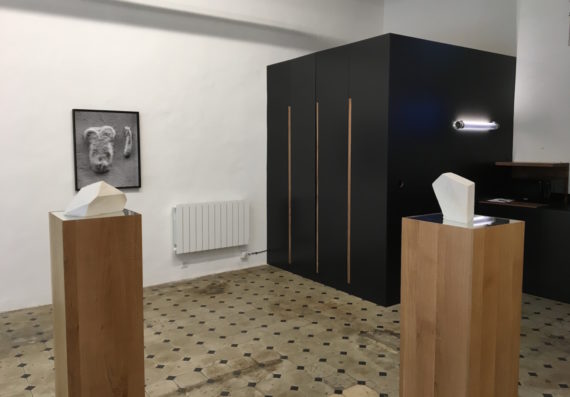 Across the street from Double V is an artist doing just that. Gilles Pourtier’s exhibition is taking place in what is usually the canteen of an architectural practice. During the week, Pourtier’s two floor-based sculptures on sleek, mirror-topped wooden plinths are moved to the side to make way for dining tables; on my weekend visit the white plaster works create a visual counterpoint to his black and white photographs on the walls. Yes, he tells me, he has sold most of the pieces in this small show, but surviving as an artist in Marseille is not easy and he also works in the building trade – the money is more reliable.

Pourtier used to live in London and then Arles where he attended the French National School of Photography. After graduating in 2009 he moved the 60 miles south east to Marseille; he explains how more artists are arriving in the city in order to take advantage of the supportive environment and an affordable cost of living. It’s a trend which other Marseille artists I speak to – in studios at the city-supported Les Ateliers De Boisson for example – confirm, and the dynamic that Pourtier describes reminds me of my home city, Glasgow, with which Marseille has been twinned since 2006.

In recent years the cities’ art scenes have been forging connections and this year’s PAC includes many artists from Glasgow in a series of exhibitions and events. There’s an impressively installed exhibition of three films by 2017 Scotland + Venice artist Rachel Maclean at Château De Servières; an exhibition of ‘Art Brut au Ecosse’ presented by Project Ability at Polysemie; ‘Ink #3’ at Studio Fotokino featuring self-published and artists’ books curated by Good Press. 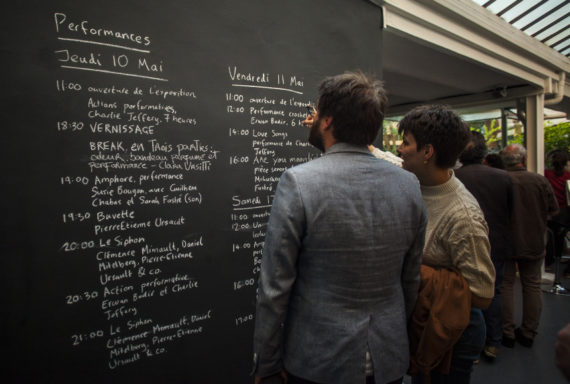 Two projects in particular seem indicative of the developing relationship between artists and curators in both cities. The three-day group exhibition and performance series (10-12 May, 2018), ‘What’s love got to do with it?’ at Art-Cade Galerie Des Grands Bains Douche De La Plaine is curated by Glasgow’s Kirsteen Macdonald and Vanessa Brito, professor of philosophy at the École Supérieure d’Art et de Design Marseille-Méditerranée. The venue is a former Turkish baths and the gallery space is arranged around a sun-filled courtyard with windows facing on to it. The exhibition’s theme is the idea of exhaustion and as I enter I’m met by a slightly fusty smell which is both strangely familiar and mildly unpleasant. This, it turns out, is a work by Glasgow artist Clara Ursitti; an attempt to encapsulate the show’s subject in scent.

I make it to the gallery on the exhibition’s last day and subsequently miss most of what, it transpires, was a busy and lively series of performances, the schedule for which is chalked up on a blackboard. As well as the lingering smell, other evidence of what was going on when I was elsewhere includes a room full of smashed unglazed clay pots. These represent the aftermath of a performance by Susie Bougon, one of a group of Marseille art students who have worked on the show with artists from Glasgow including Gordon Douglas, Cicely Farrer and Rosie O’Grady. Bougon was testing her own limits of exhaustion by balancing the pots on her body in a variety of poses, seeing how long she could hold out before they wobbled and crashed to the floor. Around 40 pots were destroyed in the process. 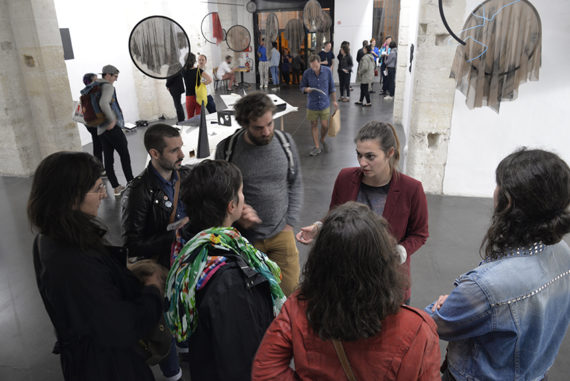 Over at La Campagnie, Lieu de Création there’s another example of the Glasgow/Marseille axis, courtesy of the exhibition ‘L’intrigue se cherche dans le dénoument de son nœud’, curated by Glasgow-based Francesca Zappia and featuring work by Doriane Souihol (Marseille) and Douglas Morland (Glasgow). Although the works have all been created individually, the exhibition is the result of a dialogue between the two artists revolving around the idea of exploring the materiality of the immaterial – specifically sound and verbal communication. Amongst other works, Morland has created an installation of circular, Constructivist-style mobiles inspired by noise reduction pop filters used in recording studios; they hang from the ceiling, gently swaying. A highlight of Souihol’s work is a series of mirrored photographs of the wax disc on which Alexander Graham Bell first recorded his voice. Crisply presented, the exhibition invites a slowness of looking that reflects the nature of its production.

In my one evening and two full days in Marseille I visit slightly less than half of the venues featured in PAC. There are a smattering of other highlights: the 4th floor apartment-cum-gallery Salon du Salon with Matthieu Saladin’s burnt-out microphone on the mantelpiece and, off the lounge, Katia Kameli’s 2014 film study of Marseille’s post-industrial periphery; 2017 Laureate of Marseille City Art Studios awardee Marc Etienne’s plain but powerful sculptural interventions on a half landing at Les Musée des Beaux-Arts in the richly ornate Palais Longchamp; the lively coming together of sculpture, painting and beguiling oddness in the show ‘Noce’ (‘marriage’) by three artists – Jean-Charles de Quillacq, Victor Yudaev, Pauline Zenk – in a small gallery at the sprawling former tobacco factory turned cultural/community centre Friche la Belle de Mai. Also worth a mention, in Friche’s sports hall-like Panorama space and over at FRAC, is Carlos Kusnir’s playful retrospective of painterly sculpture and sculptural painting, which brims with musical interludes and smile-inducing humanity. 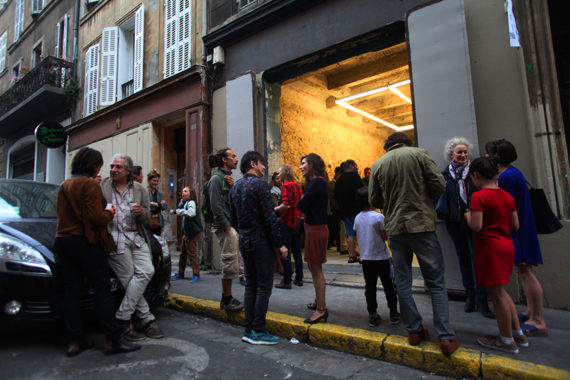 Not all the exhibitions across PAC are so enjoyable, yet as a first-time visitor to Marseille, any disappointment caused by the underwhelming nature of some of the works is frequently pushed aside by the energy and diversity of practice I witness in artists’ studios and tiny galleries. On Rue du Chevalier Roze, for example, I feel largely ambivalent about the artworks, but the very idea of a street so near to Marseille’s seafront being packed with gallery spaces feels exciting, hugely welcome and, yes, fraught with potential problems around inflated property prices and artwashing.

What happens next in the city, particularly in the lead up to Manifesta and then once that roving European biennial moves on to its next temporary home, will clearly be worth following. As will Marseille’s developing artistic relationship with its Scottish twin. 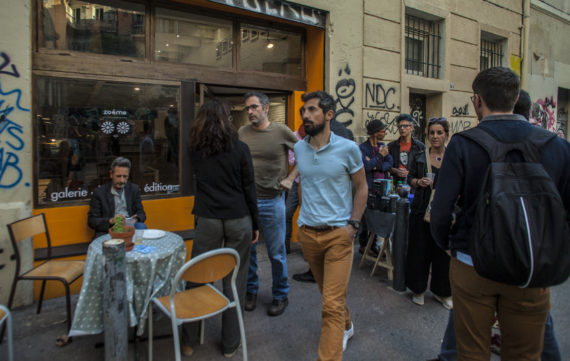 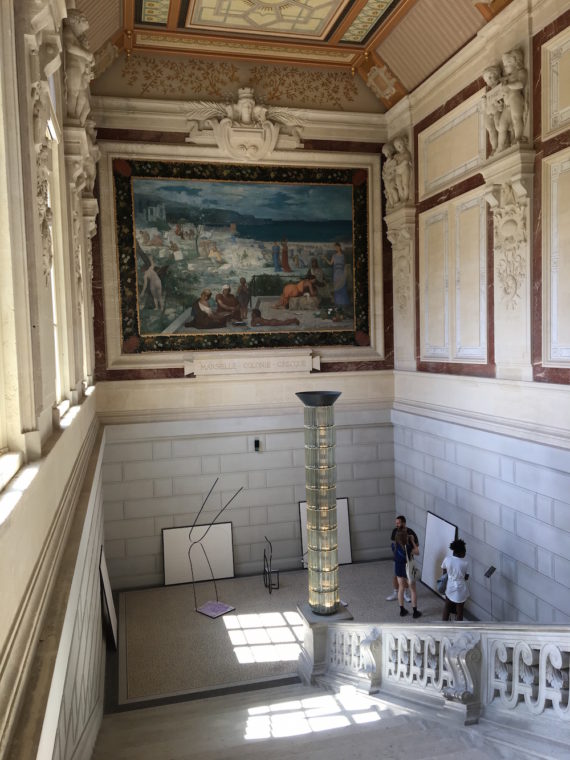 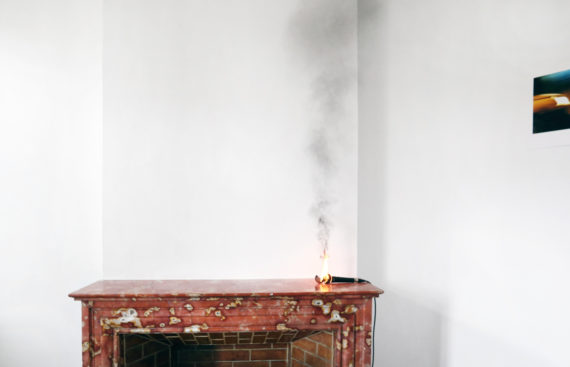