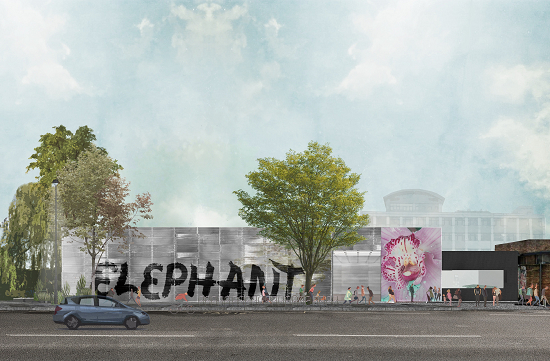 West London’s Griffin Gallery is set to close its doors on 24 May after six years of exhibitions, residencies and its annual award for emerging artists, Griffin Art Prize.

As part of this, the company is focusing on the development of a new interdisciplinary project space on the site of a disused petrol station at White City. The new space, which is set to open in autumn 2018, will be called Elephant West.

In an email statement, Griffin Gallery director and head curator Becca Pelly-Fry said that the last six years had “been extraordinary and exceeded all expectations”.

Explaining that the announcement of the gallery’s closure was made “with a heady mixture of sadness, pride and anticipation”, she added that most of the Griffin team “will soon be joining our new friends at Elephant Magazine to support them as they grow into a global creative community”.

Elephant West will be designed by architects Liddicoat & Goldhill and its creators promise “an ambitious programme of installations by emerging artists, supporting the careers of exciting young creatives by giving them the opportunity to show ground-breaking new work”.

The new space will also include a café, shop and garden.

Robert Shore, Elephant’s creative director, said: “Elephant’s tagline is ‘Life Through Art’ and, in keeping with that, the work produced at Elephant West will resonate thematically with the concerns of the wider world rather than the narrower interests of the ‘art world’. Elephant West will turn ordinary life into cutting-edge art.”

In the meantime, as west London prepares itself for the new space’s groundbreaking ambitiousness, Griffin Gallery will be holding a closing party on Wednesday 23 May, 6-9pm.