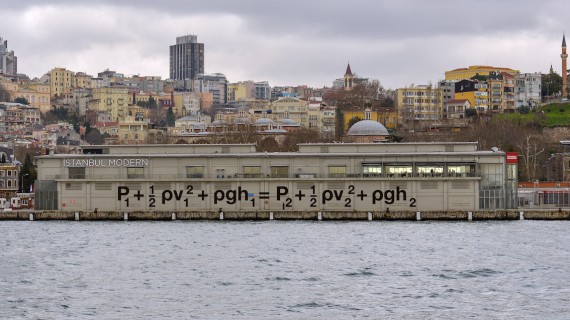 This weekend sees the opening of the 14th Istanbul Biennial, which for 2015 features the work of over 80 artists from across Africa, Asia, Australia, Europe, the Middle East, Latin America and North America.

Organised by the Istanbul Foundation for Culture and Arts (İKSV) and directed by American art historian and curator Carolyn Christov-Bakargiev, SALTWATER: A Theory of Thought Forms, straddles traditional museum exhibitions as well as a raft of unusual spaces. These spaces include boats, hotels, former banks, garages, gardens, schools, shops and private homes. 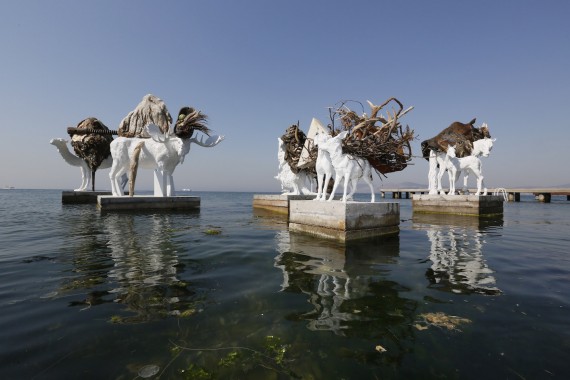 Christov-Bakargiev said: “This citywide exhibition on the Bosphorus hovers around a material – salt water – and the contrasting images of knots and of waves. There are literal waves of water, but also waves of people, of emotion and memory.

“With and through art, we mourn, commemorate, denounce, try to heal, and we commit ourselves to the possibility of joy and vitality, of many communities that have co-inhabited this space, leaping from form to flourishing life.”

Amongst the artistic projects exploring irregular wave patterns and organic growth is the work of Christine Taylor Patten. She has produced a series of 1,000 tiny one-inch square drawings titled ‘micros’ with minimal materials such as a crow-quill pen and black ink on paper.

Anna Boghiguian’s The Salt Traders is a grand, sculptural installation of old sails, paintings, drawings, fragments of a boat and sound recordings.

Oxford-based artist Ed Atkins, who works predominantly in video, sound, drawing and writing, will also be exhibiting (see video below). Turner Prize-winner Susan Philipsz, Liam Gillick, and the Brazilian artist Adrián Villar Rojas are amongst the other artists presenting work at the biennial.

In addition, a film programme will be held free of charge throughout the biennial at the Istanbul Modern Cinema. Artists showing include: Tacita Dean, Guido Wan Der Werve and Marguerite Duras.

The last edition of Istanbul Biennial attracted criticism following what was described as a ‘tactical withdrawal from contested sites’. The event, Mom, Am I Barbarian? addressed much of the dissatisfaction with prime minister Recep Tayyip Erdogan’s increasingly authoritarian regime.

Following protests, a number of works were removed from the city’s public spaces and rehoused in more traditional white cube galleries.

Speaking at the time, Marcus Graf, associate professor of contemporary art theory at Istanbul’s Yeditepe University, said: “Just pulling out of the city and organising the exhibition in white cubes does not seem right to me. There, everything is approved and accepted anyway by the followers of art and culture. I believe that this is a great failure, a missed chance.”

It is expected that the 2015 edition will attract upwards of 5000 visitors on its opening weekend alone. The biennial will be continue until 1 November 2015.

Ai Weiwei: “They know I want to make China a better country”