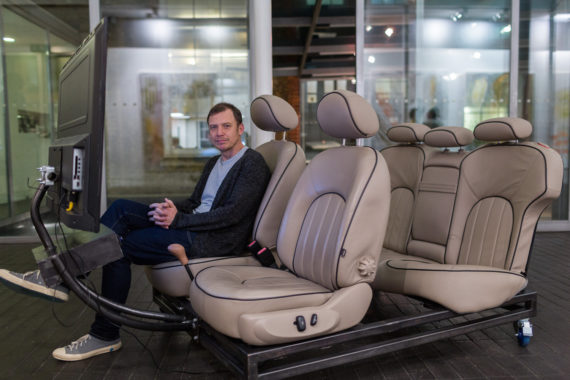 Keith Harrison has been awarded the £30,000 Jerwood Open Forest commission to develop a new publicly-sited work that addresses national conversations around forests and our engagement with nature.

Harrison’s winning proposal will see the creation of a large-scale ramp, reminiscent of a rollercoaster or skate park structure, that will launch a clay replica Rover 75 car ‘into the unknown’. This performative installation will act as the culmination of a procession that will link a former industrial site in Birmingham to a forest clearing in Cannock Chase.

Harrison, who grew up in West Bromwich, knows the Cannock Chase area from his childhood, when his family would make the drive up to this “wilderness bolthole”.

Considering the role that cars play in many people’s experiences with nature, from parking up for daylight rambles to perhaps more illicit activities after dark, Harrison has chosen a clearing for his installation that can double as a car park, allowing the audience to draw up their own vehicles along either side of his installation, lighting it with their headlights.

The work will be a meditation on the demise of large-scale industry in the Black Country, where car manufacturing was once an important feature. Harrison has chosen the Rover 75 model as it was the last car to be produced at the Longbridge factory in Birmingham where both his grandfather and mother had worked.

Taking place in Autumn 2017, Harrison’s commission will see his clay replica begin its journey from the now demolished Longbridge site in a procession to Cannock Chase.

“The opportunity to realise a project which links the former Rover factory at Longbridge, Birmingham where my mother and grandfather worked, and Cannock Chase, a wilderness we visited regularly as a family whilst growing up in the Black Country, is immense,” says Harrison. “The work will see the social and environmental impact of the car in forests, and the demise of automotive manufacture, collide.”

Harrison’s idea was selected from a shortlist of five artists, including Rebecca Beinart, Magz Hall, David Rickard and David Turley. Each received £2,000 and six months to research and develop their proposals.