Learning disability artists' summit: "It feels like there is a lot to be learnt here" - a-n The Artists Information Company 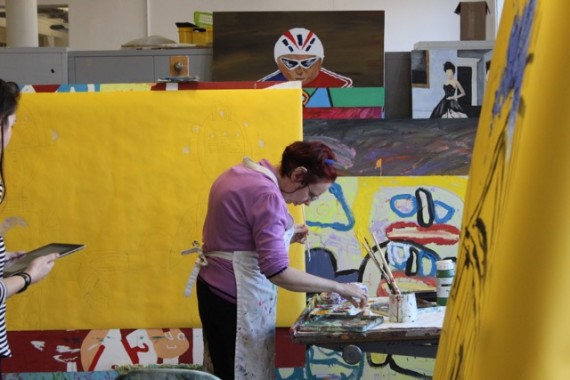 “No, I’ve never done it. I think it’s a first. I’m breaking new ground!” Tanya Raabe-Webber is a visual artist from Yorkshire, working mainly in portraiture. She’s talking during her residency at The Summit – It Is Now, Project Ability’s international gathering for learning disability artists and their studios.

Across three days in early March at Project Ability’s HQ in Trongate 103, Glasgow, the summit brought together eleven supporting studios from around the world to share ideas, stories and artwork, and to discuss working practices and networks both locally and globally.

Something that strikes me quickly about this conference is that the energy is positive and extremely welcoming. No one is staking out their territory, or at least not in an obvious way.

This is especially clear when James from Arts Project Australia interrupts a conversation with Project Ability’s executive artistic director, Elisabeth Gibson, to tell us about the expansion of his kitsch tea towel collection here in Scotland.

Of course important issues are being spoken, shared and tested, but there is an openness and a respect for everyone in the room. Even by the event’s third day, the energy is high and the conversation flowing. It feels like there is a lot to be learnt here.

“It’s the first time we’ve had the summit,” explains Gibson. “It kind of marks our 30th anniversary which was in 2014. That was the peg that allowed us to get funding through Creative Scotland to host this. It has been a long-held ambition to be able to invite organisations here.”

Project Ability’s studios are bright, airy and boast an inspiring view of the Victorian industrial buildings around Glasgow’s Trongate area. Talking to Gibson begins to uncover the reason for the sustained energy and positive discussion.

“We are very fortunate that we have the space to do this,” she says. “So often conferences take place in hotels which is the most inappropriate place for us. It’s a studio and people recognise it, they know it’s a studio the moment they walk in. All of that anxiety is removed immediately.”

Gibson tells me that the artists visiting from Australia in particular were glad to see canvases, paint, easels, and printing presses after five days of travelling. Each of the eleven studios have brought two of their represented artists, part of the careful and generous curating process of the summit by the Project Ability team.

The uniqueness of this setting was commented on and celebrated by everyone at the event. The careful layout of the space meant that there were workshops happening alongside the talks. There was the freedom to explore the space and make work, or to sit in on the talks. 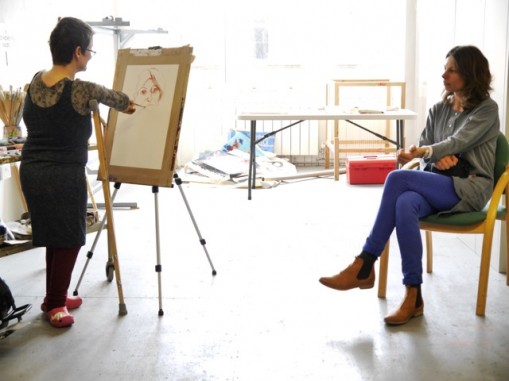 On top of the artwork making and the programme of engaging talks, there’s another layer: Rabbe-Webber’s process. Her residency is integrated into the summit.

“As an artist I’m here to record the people, the stories, the happenings, the physicalities, the emotions, not in a written sense but in a visual sense,” she says. “That’s my favourite bit. It’s not about talking to the artist and asking them what they’re doing. It’s about watching and observing and having a physical and sensory connection.”

Raabe-Webber’s almost-silent connection with the artists, along with her observing and visual documentation of most of the delegates, is what elegantly ties all the elements and spaces of the conference together.

The network here feels extremely strong and long-standing. I muse on this to Gibson who quickly tells me that the participants barely know each other. This is a surprise as everyone speaks so intelligently together, but on reflection it perhaps isn’t so shocking. The issues are homogenous, the language is thoughtful, and identities and values are shared.

“We’re all striving,” says Gibson. “Events like this help us to see what we mean by things like excellence and good practice. We can get the measure of it by coming together and having these discussions.”

Raabe-Webber makes a similar point: “I think it’s a network that isn’t quite established as a network. I suspect we really are all quite different in our approaches because we’ve got cultural differences and disability differences.

“For me as an artist who works with other artists, I think that visiting these studios would be really interesting piece of research. It would be really great if it was put into some sort of format that can be accessed by other artists and organisations which I kind of think is missing a little bit.”

Raabe-Webber’s finished piece, a triptych made from all the portraits produced during the summit, will be featured in the gallery at Project Ability early next year. It feels like she is already innovating with the residency – establishing what this global network looks like by connecting with individuals and taking that learning into her local network, but also establishing this visually by capturing all the nuances and presenting them together.

“It’s really great to celebrate the disability arts culture that I think often is either not understood or celebrated or seen as an art form in its own right,” she says.

Raabe-Webber and Gibson both believe, however, that there is a shift happening, a change in perception. “Maybe this is the start of this kind of confidence,” says Gibson. “We’re confident organisations in our own right but there’s a definite sense that there’s a strength in numbers; talking to peers and assuring each other saying ‘Yes, this is OK! We’re doing the right thing.’”

Confidence is definitely high in the room. The range of work being presented is vast and the quality is extremely high. “Over the last few years there’s a definite change. You can feel there’s a real shift in people’s perceptions.”

And what about the funding bodies? Arts Council England has funded Raabe-Webber’s residency, and Gibson is positive about developments in Scotland. “There’s a definite change in Creative Scotland to be far more open to this sort of discussion,” she says. “They’re opening up to what their definition of an artist is. There’s more activity happening across the art forms. They’ve having to pay attention.”