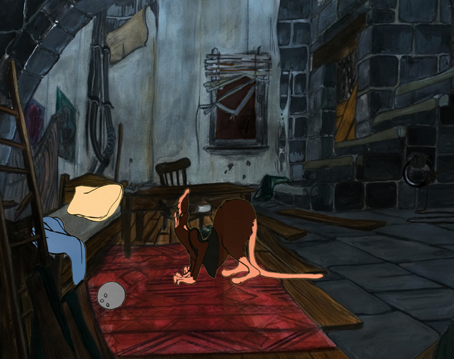 Compared with previous editions, the 8th Liverpool Biennial is a pretty modest affair. There’s less focus on making a visual impact on the city, less sense of the festival wheedling its way into the nooks and crannies of Liverpool’s everyday life. There are even fewer promotional banners hanging from lampposts – the International Conference of Business seems to have snapped most of those up.

The Biennial does transform one aspect of the city, though, taking over the disused old Blind School – built in 1850 and most recently used as The Trades Union Centre –  for A Needle Walks Into a Haystack, curated by Mai Abu EIDahab and Anthony Huberman.

The title feels appropriate. As you wind through the shabby corridors and bashed about rooms of this former institution, it’s quite easy to get a little lost, to find yourself back where you started. A bit like the cartoon rat in Peter Wachtler’s animated film, despondently crawling out of bed each morning and back in again at night, as the artist dolefully recounts all the stuff that life has thrown at the rat/him/us. As a bowling ball falls off a table and on to poor ratty’s head for the umpteenth time, the weight of life’s pressures gets ever heavier.

Also featured are two more short animations from Wachtler, one showing homeless people sleeping round a fire, the other a pair of crutches walking down the street as an increasingly angry, despairing and deluded narrative flashes up on screen. These are stand-out, hard to miss works that set the scene for the show’s loose theme of how we cope with and subvert life’s crushing routines and society’s expectations of us.

There are 17 artists across the Blind School’s three floors, and while some of the work is frustratingly opaque (high on this list is Michael Stevenson’s computer games competing against each other to ‘win the swing of doors’ borrowed from John Moores University’s school of computing and mathematical sciences), the strike rate isn’t bad.

A small room on the ground floor is a treasure trove of drawings and paintings by Chicago artist Christina Ramberg (1946-1995) – a quietly subversive meditation on form and femininity. On the building’s top floor, things get considerably louder for Rana Hamadeh’s Can You Pull in an Actor with a Fishhook or Tie Down His Tongue With a Rope? (2014), an eight-channel sound piece in a specially constructed room. Drawing on the Shiite ritual of Ashura, Hamadeh remixes the chanting of thousands of men, women and children to create a physically draining experience.

Over at Tate Liverpool two floors are given over to the Biennial programme. In the Wolfson Gallery, French architect Claude Parent has constructed a kind of adult’s playground in light grey and yellow, in which a selection of works from the Tate collection are exhibited. Wooden ramps shift sightlines and turn walking round the gallery into a small adventure, taking you face-to-face with Paul Nash’s Voyages of the Moon (1934-37) or Edward Wadsworth’s geometric woodcuts (1915). The works – from Naum Gabo, Helen Saunders, Francis Picabia and more – are a delight in themselves, but Parent’s architectural intervention is the star here; a sculpture for walking on and through.

On the second floor, there’s more from the Tate collection in a show looking at domestic environments and implements. It is dotted throughout by Patrick Caulfield pieces, and there are also two rugs from 1929 by Francis Bacon, an Andy Warhol drawing of beauty products from 1960, a Giorgio de Chirico from 1926 and a Lucy McKenzie painting from 2011. It’s a lively, fun and surprising selection consisting of over 80 pieces.

At Bluecoat, there’s more looking back in order to better understand the present with a James McNeill Whistler show that focuses on the influential nature of the artist’s attitude and approach to art, as much as the art itself. It’s a brave move and an interesting and enjoyable show, but so much of one artist ­– and one who has been dead for over a hundred years – feels a little out of place in a biennial of contemporary art.

Sharon Lockhart’s 29-minute film at FACT isn’t newly commissioned, but it is relatively recent work. Made in 2009, Podworka results from the American artist’s time in Poland and shows a variety of different children at play. Except for a lone grandmother, adults are absent, the children creating their own worlds in cobbled courtyards amidst abandoned buildings and graffiti-covered walls. It’s a simple idea that is utterly captivating thanks to its clever framing – static camera, walled spaces and never a hint of the sky or what lies beyond these play areas.

There’s plenty more going on at partner venues across the city – 50 new paintings at the John Moores Painting Prize exhibition, shows at The Royal Standard and Open Eye Gallery, Carlos Cruz-Diez’s Dazzle Ship on the waterfront. It is, though, the core curated programme that defines the Biennial and, the old Blind School aside, this edition feels curiously weighted towards art from the past rather than the present. And for a biennial of contemporary art, that seems like a misjudgement; more new work next time, please.